This movie bites.  From the files of 'Why The Hell Not?!?,' we have a film about a giant, killer eel.  I can only think of one of those off the top of my head- Deep Shock- and that one was set in the Ocean.  This one is set in the swamp.  You know what that means- inbred, redneck stereotypes.  On top of that, we have dodgy science, lame characters and CG work that is obviously, well, CG work.  Much like Birdemic, there's no distance you can stand away from the screen to make this look real.  I should say that the comparison is a bit insulting to this film, as they are using actual CG models and not clip art!  I should also say that I don't really care, as this movie sucks too.  Let's get out our deadly sugar as we face-off with... 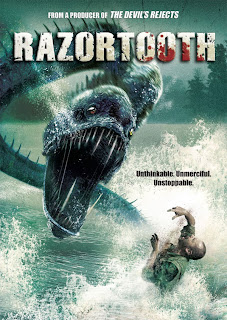 The film begins with a random death.  Get used to that, as there are only about two dozen of them!  What do you do when your movie is lacking in plot, characterization and good effects?  Throw in lots of murder, of course.  The key problem is that this requires you to show more of your special effects, thus requiring you to throw in more murder and, well, you get the idea.  In between the death, we get a couple of plots.  We have a guy whose job it is to get rid of snakes and rats.  An early sub-plot also involves some prisoners that escape from prison and whose foes are killed by the eel.  We also have the town's female Sheriff,- a unique idea way back in Roger Corman's Gunslinger-a group of interns working for a scientist and a plot involving some people going out rafting.  Translation- they die too.  As I said, a good chunk of the film's First Act is solely about death.  We have death in the water, death on on a boat and even death in a shower.  Please don't ask how the giant eel fit in the pipes or how it knew how to do so! 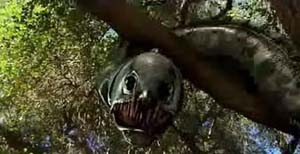 Eventually, the Sheriff and our hero get involved.  They wander around for a bit, occasionally finding bodies- like in the Diner, where the pair inside are killed off-camera- or evidence of death- like near the outhouse.  They meet up with the father of one of the people missing on the rafting trip.  More people die as the Sheriff stops the town from forming a posse.  They still think that the convicts are behind all the deaths around here.  Clearly they were the ones leaving partly-dismembered bodies covered in dozens of super-tiny teeth marks!  Finally, the hero figures out what's going on, although the way he does so kind of boggles me.  He just goes up to the scientist guy, punches him and says 'I know that you're behind this!'  I mean, he's right, but couldn't you at least explain how he knows that.  Basically, the guy made a giant eel because...um, science.  It's only weakness is that it can't process sugar, since the Fruit Lobbyists were worried that the eel would disrupt production.  No, really.  About that whole 'escaped convicts' plot-line, it ends abruptly when their new hide-out is the eel's new home and they both die.  Yea. 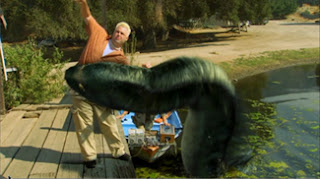 It all builds up to this moment- a showdown between the eel and our heroes.  The scientist tries to shoot it with a hypodermic needle full of poison, only to accidentally shoot a person.  Who didn't see that coming a while away?  He dies as well when his plan to electrocute the eel backfires too.  What good are you?!?  They finally remember the whole 'eel can't process sugar' thing and try to use one of the interns' sugar pills as a processed poison weapon against the thing.  Yes, poison worked so well last time!  Sure enough, their plan doesn't work as the eel 'dies' and just sort of swims away.  So is it vulnerable to sugar or not?  You're trying to be dramatic and all, but could you at least make it logical?!?  Plan Z involves just sticking a grenade in the damn thing's mouth.  This actually works, causing the thing to explode as our two heroes (the only survivors that stuck around) make-out while the things guts fall from the sky.  They walk off into the sunset as another eel monster rises up.  Oh, make that six of them show up!  The End. 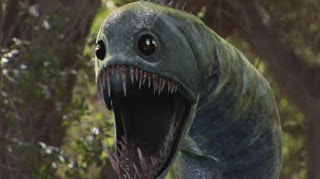 Bite me!  The plot of this movie is...well, barely-existent.  It's just a series of random sub-plots (seemingly pulled out of a hat) that serve to tie together monster attacks.  This is like a Greatest Hits compilation, only all of them are done and only serve to highlight this film's unrealistic effects.  Don't get me wrong- the idea behind the eel monster is cool.  It's just a shame that somebody with talent (and a budget) wasn't responsible for the actual execution.  I wanted to like a film about a giant, killer eel- I really did.  It even defies my one key rule about renting monster movies- beware if they are afraid to show you any of the monster- so I had more reason to give it a chance.  Then again, it's only accolade is that one guy who worked on The Devil's Rejects also worked on this one.  It's like the fake praise from the Spy Hard poster- 'A film from beginning to end!'  Hell, Date Movie parodied this whole idea by saying that it was by 'Two of the Guys Behind Scary Movie.'  The best part- it did that years before this movie was made.  The bottom line- this movie is great if you like lots of kills that feature bad CG.  For everyone else, watch Tremors or, hell, Jaws.  Take us away, original title for this film on a poster... 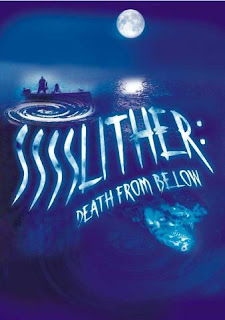 Next up, we end the week officially with the original version a Joe Dante classic.  Will its fancy new DVD version serve as a trophy or as an ironic reminder?  Stay tuned...