Please let this be the end!  I made it through Truth or Dare?, which was just a random VHS mess.  I survived Truth or Dare 2?, which was just a giant, insulting dream sequence.  Can this film be worse or is it just bound to be better by default?  Well, it's still a Tim Ritter film, so I'm just going to go ahead and say 'no.'  So what's the plot here?  Well, it involves not the actual killer from the series, but a new one killing those seeking to profit from his legacy.  That's...different, but still kind of silly.  They also do some clever/lazy retcon work to make a minor character into a series-connector.  On one hand, I'll give you credit for using your footage.  On the other hand, it makes no sense and is just stupid.  Without further ado, let's begin... 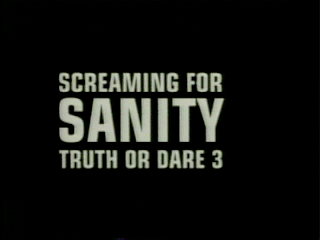 We begin with a quick recap of the first film and show the ending of the second one with the group discussing Mike Strauber being given probation.  Say good-bye to two of those characters, by the way, as only one of them will play a part in the film from hereon out.  The remaining doctor- played by Joel D. Wynkoop- takes Mike down the hallway and then, for no reason, starts beating him up.  We learn later that this got him fired from his job.  When you hear the reason for him attacking Mike, the logic will just get dumber.  The narrative then focuses on a sad, crazy guy in a hotel.  He has a vision of his dead wife and a flashback to when she died.  Her death occurs via stock footage from the first film in which Mike runs over a woman and a baby.  Stay classy, movie!  He goes to his doctor, but the guy is not a lot of help.  When he sees a story about a guy who sells serial killer merchandise, the ghost appears again and tells him to take action! 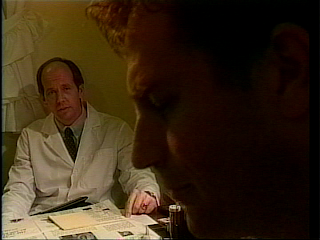 The film falls into a pattern of scenes.  Don't you just love repetition in cinema?
* A copper-masked killer attacks someone.
* We see Wynkoop moping about and/or being sad.
* The crazy guy sees a vision of his wife.
* We are shown stock footage from Truth or Dare?: A Critical Madness.  It was just great the first time!
Basically, you can just pick any of those scenes at random and you have the Second Act of the film.  Yea. 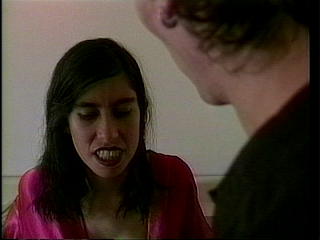 Finally, as the film begins to wrap up, we learn a bit of stuff.  Wynkoop was a hospital worker when Mike Straub escaped in the first film.  They use footage of him in the film as a minor character and just retcon it in, basically.  He feels bad for all of the deaths that occurred after that escape, so he became a doctor there...because it's just that easy.  Out of rage, he attacked Straub and got himself fired- dumb-ass.  The copper-masked killer (also played by Winkoop for no clear reason) has been targeting people who made money from Straub's actions.  Wynkoop's girlfriend- who is way out of his league- is kidnapped and our hero tracks her down.  He follows the doctor from earlier to a warehouse and is attacked by the killer.  He takes him out, only to be confronted by the doctor.  He had his girlfriend- hello, new character- pretend to be the guy's wife in order to drive him mad.  The guy recovers and kills the doctor, before ultimately killing himself out of grief.  The woman runs away, only to be haunted by he ghost of the killer.  The End...for now. 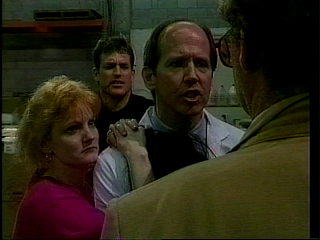 The third time is still a failure!  The plot of this movie is a big, confusing mess.  We have a series of characters that have almost no connection to each other in a film that barely makes sense.  What drives the doctor to make his patient a killer?  What makes the killer able to gain 50 lbs in order to be played by Winkoop?  In the stupid, second film, Wynkoop playing the character was at least a plot point.  Here- it just seems like they film a bunch of scenes of him in the outfit and decided later how it would fit in.  Stop taking movie advice from Ed Wood!  Like the second film, it really thinks that it is clever.  The action is not that good and, on top of that, the pacing kills it.  We go long stretches without a kill, while a couple of the kills are over very quickly.  The serial killer exploiter guy- who looks like the hero from Time Chasers- has a long, drawn out death.  He's beaten up, stabbed, has chemicals poured into his mouth and is ultimately strangled.  You saved all of your rage for him, huh?  The whole thing is just cheap and the DVD release does nothing to help matters.  If you like DVDs that are VHS Transfers without Menus of any kind, you're in luck!  If Ritter didn't try and the people behind the DVD release (probably Ritter too) didn't try, why should you care?  On the plus side, check out the cameos by the Rumpelstiltskin and Creep (another Ritter film) posters below... 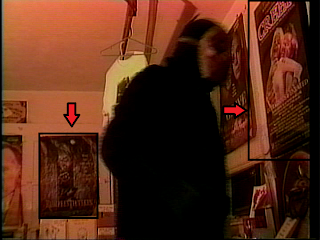 Next up, we change gears dramatically with a Disney film.  After being denied a DVD release for a decade, how does it turn out?  Stay tuned...