All your questions will be answered!  Oh wait- you didn't have any questions?  You say that Species ended with the villain/heroine dead & Species II did that...again?  Well, they made this movie, so it's too late to say 'no' now!  As a bonus, this movie was made for the Sci-Fi Channel (pre-name change).  You want more?  Well, the film series' star is only on hand for a cameo.  Did she turn them down or did they not want her?  It's hard to imagine that Natasha Henstridge had too much on her plate!  This movie is a follow-up to the other films, except that it kind of goes off on its own tangent and just starts making shit up.  Oh boy, this will be fun. Let's check out the number 42 to see the meaning of... 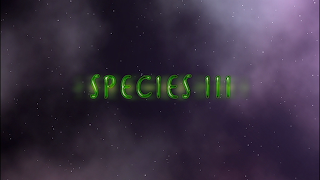 The film begins with Species II left off with a government ambulance taking away the wounded body of Eve (Henstridge) and one of her weird, red-headed children.  Yeah, that whole plot is easily overlooked from the last film.  By the way, Species II came out in 1998, while Species III came out in 2004.  Slowest ambulance ever!  Eve gives birth to...another baby, which subsequently kills her.  Way to get out of this film while you were ahead, Natasha!  We awkwardly jump to a new story, that of a student giving a tour of a energy company's facility.  Two things: one- how are you in charge of the tour and two- could you make this foreshadowing any more obvious?!?  He goes to class and is 'blessed' with a long lecture about how the government doesn't respect life created in labs.  You're too subtle, movie!  Sure enough, the guy is raising a little girl who is the baby born from Eve.  Our hero is about to lose his scholarship unless he focuses on a new field of study.  Guess who's looking for a new helper! 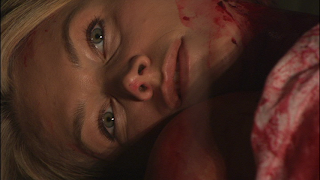 Naturally, conflict arises when our young hero realizes that the alien girl is about his age and isn't keen on wearing clothes.  Being topless- the main job requirement for starring in a Species film.  The guy who wanted to cut his funding shows up too, just in time to see the girl naked (from both sides, thank you) and then get killed by her.  In addition to the girl/alien that the scientist is trying to raise, he runs across other 'children' that have very unstable DNA and aren't living long.  The whole point- give the scientist more drive to help fix whatever problems the girl/alien may have & stop this from happening to her.  Enough of that though, let's throw in more romance.  It's sappy, cheap and fills up the run-time quite nicely!  Real conflict finally arises as a more healthy male guy/alien shows up looking for the girl/alien.  He's got one thing on his mind- date rape! 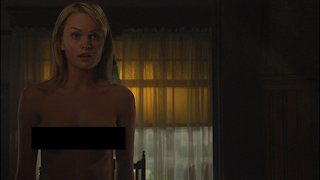 We get a long, silly fight between the two alien/people.  They turn into their 'real' forms and slap each other around.  The girl/alien is saved, but the scientist guy is killed by the guy/alien.  This leaves the guy and girl together, which just leads to more romance.  Of course, the girl runs off to find out about yourself, leading to the required scene of her regenerating a limb.  Ha ha ha- overdone.  All of this leads up to a a big, final battle between another male alien and our heroine at, wait for it, that lab from the beginning of the film.  Hey, that's what foreshadowing means!  In the end, both of the creatures fall into the thing as the doors are sealed.  In a completely illogical twist ending, we learn that the girl/alien is still alive and somewhere else.  Um, how?  The End. 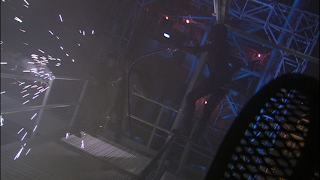 Was this really necessary?  The plot of this movie is alright, but nothing more.  It doesn't really take any major risks and just kind of goes through the motions.  It's like the final Raw and Smackdown shows before Wrestlemania!  The new stuff they introduce is just kind of silly.  I'll give them credit for not ignoring the original films.  However, the original films are not, you know, good.  I might forgive you somewhat for ignoring those films.  The CGI here is pretty silly, but they at least use latex suits for a lot of the alien work.  They go against the H.R. Giger designs though- boo!  It's not much worse than Species or Species II.  The whole film is just cheap and kind of pointless though.  Let's hope that things improve for Species IV, but...we all know that they won't.  Take us away, teen girl ass that I (sadly) have to censor... 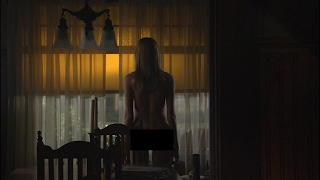 Next up, I cover the final (so far) film in the Truth or Dare? series.  Please tell me that this one isn't all a dream too!  Stay tuned...