Another Rifftrax Review- only this one was one that I was never going to do otherwise.  To see what I survived, read on... 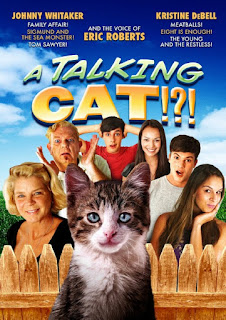 This is Duffy.  He's a talking Cat that sounds like Eric Roberts.

He's magic and can talk to people, but only once.  He's also NOT the Cat on that Poster above... 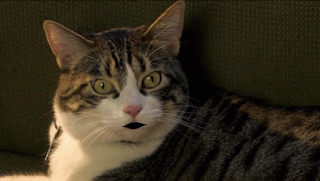 This is a rich guy (played by the grown-up kid from Sigmund and the Sea Monsters).  He's...I mean...well...next picture! 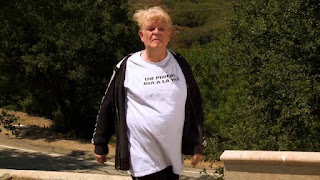 This is his Son.  The Actor has no IMDB Page, but he's got to be more than 35 years younger!

He needs confidence, which only a talking/slurring Cat can give- obviously. 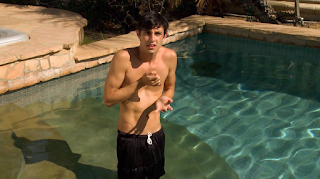 Can he get the girl?  Can his Dad find love?

On the plus side, this is a David DeCoteau Film and he's only shirtless that one time.  Progress? 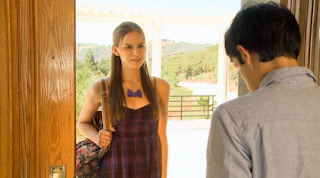 The Cat goes around giving advice...in between the Film's overuse of Stock Establishing Shots, an obsession with Cheese Puffs and the fact that they are obviously tricking this cat with a laser. 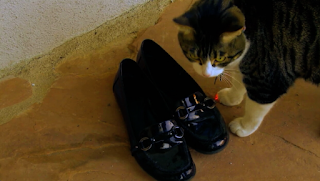 Can the Cat survive a(n off-screen) car accident?  Will the families work together?

Will someone please take Eric Roberts *back* to Rehab based on his line reading?  To find out, watch the Film (but only with Rifftrax).

I wish I was on whatever Eric Roberts was on!  Seriously, this is a true bit of Trivia as stated by David DeCoteau- Roberts' part was recorded in 15 minutes in his living room!  I honestly believe that.  I guess kudos for doing the work that fast- it's less time than writing this Review has taken.  I also wasn't clearly on a metric ton of pot while doing this either.  Putting aside is weird, slurring delivery, the Film is still terrible for many reasons.  The Film has two locations- David DeCoteau's House (as seen in every Film of his after 2010) and a smaller House.  Both were furnished with random stuff brought by the Cast (to save money).  Why mention how many locations it has?  Well, the Film uses- wait for it- 59 ESTABLISHING SHOTS.  Yes, someone counted (not me)!  It's just...holy Xenu- that's too many!  The Acting is tolerable, but that's about all I can say for it.  The Plot is a loose mess of nonsense, pointless bits and Cheese Puffs.  These things- the homemade kind- are introduced as a Plot Point around an hour in.  If you play the 'Cheese Puffs' Drinking Game, your kidney will shut down before the end of the Film!  If you watch this for accidental hilarity, it is there...but you have to endure a lot.  Rifftrax- again- makes it tolerable and honestly really damn funny.  For example, the Film uses FOUR DIFFERENT SHOTS of a Car driving on a road IN A ROW!  The gang make a great running gag out of it that makes the whole thing actually enjoyable.  If you're a brave (and stupid) man, you can watch stuff like this and Roller Gator on your own.  I wouldn't (again) though.  I guess I'll see if A Talking Pony!?! is any better someday.  Before nobody asks, even THIS Film has alternate Cover Art that is a complete lie (and a new Title)... 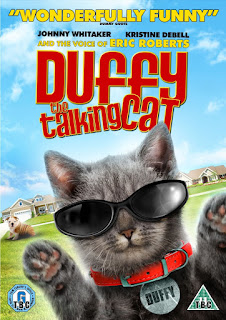 Bad, bad so-bad!  It- like Roller Gator or Manos is a delight to watch with Rifftrax though.
Posted by Alec Pridgen at 11:08 PM