With China dumping a giant Shark in our laps this weekend, I might as cover another one of their Films.  In this case, the epic start to a Fantasy Trilogy... 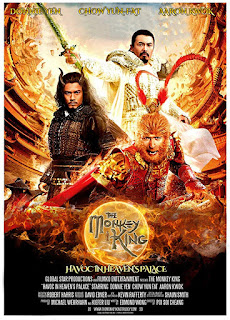 The Film begins suddenly with a war in Heaven.  The Demon King tries to wrest control from the Jade Emperor (Chow Yun Fat).

Many pixels were lost in this battle and the King was exiled to Earth. 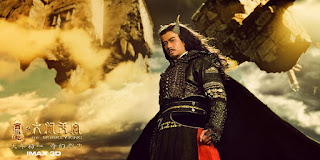 A Goddess turns herself into crystals to restore Heaven and the remaining one creates our Hero- a super-strong monkey man.

He is trained by a great Master, gains great power and gathers tools to protect the other monkeys.

Unfortunately, he also causes natural disasters and just acts like a dick the whole time...but, love, I guess.

The whole Arc of the Character is that he's going to play a big part in the battle over Heaven.  As such, he is constantly played by the Demon, while the Emperor just kind of does nothing. 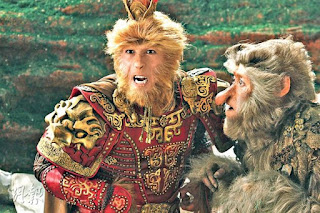 He eventually gets appointed to work in Heaven- as you do- but runs afoul of an Elder working with the Demon.

To be fair, he's still a dick here too. 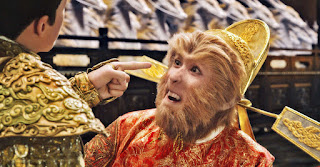 All of it leads to a crazy battle for Heaven.  You really need to see this thing for yourself.

To find out how it all ends, watch the Film.

A bright, shiny mess of a Story.  The Story is quite deep in lore, being based on some pretty famous Chinese Stories.  That said, the titular character is kind of a pushover.  He's constantly being tricked and/or led into doing what other people want him to do.  His whole Arc is supposed to be about him making choices for himself.  I mean, he does make some, but they are almost entirely based on lies and misdirection.  He finally stands up for himself after causing lots and LOTS of problems.  He's also kind of a dick.  Again, it is part of the Arc- I know.  He's just never quite the repentant about what he's done, even at the end.  He's also constantly-rewarded for his bad behavior, rarely facing consequences.  If you can get past that, the sheer creativity and brightness of the visual is something to be hold.  The Film is budgeted at around $67 million US Dollars and you can definitely see it!  Not all of the CG is exactly seamless, but you have to respect the creativity of the designs.  The Film is very creative and no amount of Story issues can take that away.  Speaking of taking things away, here is what happens before they render in the CGI... 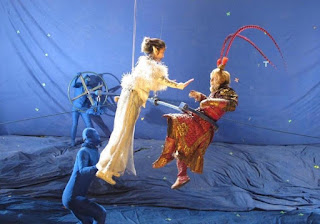 It truly is a barrage of bright, impressive visuals.  The Story just can't quite match up to the sheer gloss and polish though.
Posted by Alec Pridgen at 11:34 AM