Not to be confused with the Music Video, this Show ran for two Seasons right at the start of the 1960s.

I have a handful of these and I picked the one with the most interesting Title.  It ended up being more notable than I intended (and also pretty good).  This is... 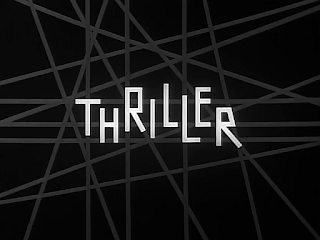 In The Grim Reaper, the Story revolves around a cursed painting, the last work by a mad Painter who killed himself after he finished it.

I really like to picture that Karloff kept that painting and greeted people at the door like this too.  Don't you?!? 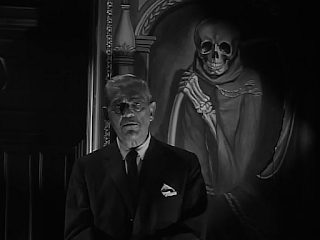 An older Mystery Writer buys the painting, which leads her Nephew to come and warn her of the dangers.

Every Owner has died violent deaths- all 17 of them! 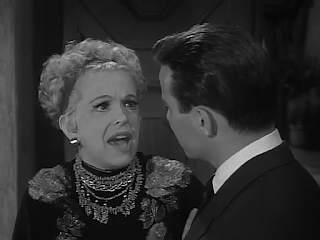 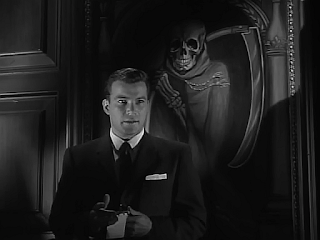 Complicating matters is the Aunt's young Husband, Shatner's girlfriend and the fact that former is constantly trying to force himself on the latter. 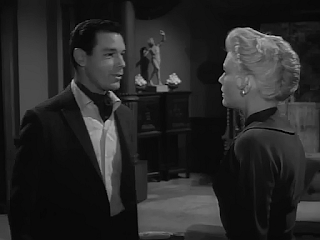 That morning, the Aunt is discovered dead at the bottom of the staircase!  The Police suspect no foul play, but should they? 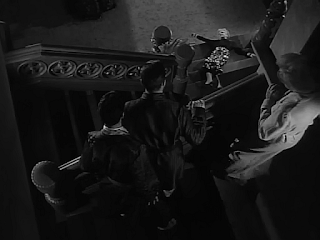 As it turns out, yes!

Shatner plays his big move shortly thereafter, poisoning the husband (and sole heir) and making it look like he killed himself out of guilt.  Damn, Shatner! 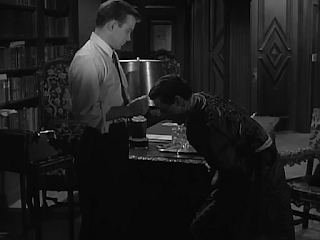 At this point, we get the Shatner we all know and love.  He spills the beans to his lady and taunts the painting! 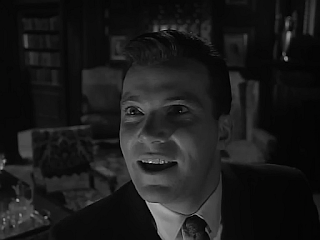 Bad idea as the lady locks him in the room with it to call the Police and...uh oh. 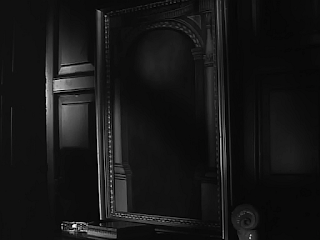 In some great POV, the Reaper seems to kill Shatner as his body is found the next day (but not shown due to the '60s TV Standards) and the painting is bloody again!  The End. 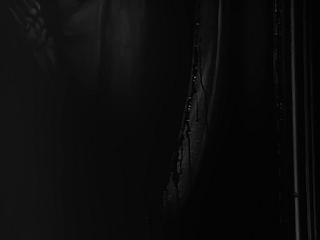 A solid, creepy tale.  It makes since when you realize that this was done by Robert Bloch, the man behind Psycho.  He could write good B&W Horror- clearly!  The Episode does a great job of giving you little hints and things that become important later.  For example, Shatner asks for the Husband's autograph (as he is an Actor) and then uses that as the 'signature' for his 'confession.'  There's also lines like the girlfriend mentioning how Shatner's character drove her to drink that night.  She obviously didn't realize how intentional that was!  The whole thing pays off nicely as everyone has a bit of an Arc.  The climax only suffers in that implies something that you would love to see.  That said, they couldn't possibly do this effect *that* well in 1960 (and on a TV Budget), so I get it.  Not seeing it is better- I just also realize that some people will be bothered by this.  All in all, this is a great introduction to the Show and I can only hope that subsequent episodes will match up.  All I need now is Shatner in an Anthology Show from the '70s and '90s to complete the set.  Can someone hook me up?  In the meantime, enjoy this reminder of NBC's old, confusing logo... 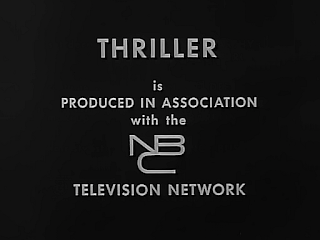 Next time, will I have more Guest Stars and murder.  All signs point to yes.  See you then...
Posted by Alec Pridgen at 2:41 PM