I suffer for my art.  One day, I'll make some.  Speaking of stuff that isn't art, they made a 5th one of these, so I might as well cover this before the 6th one debuts... 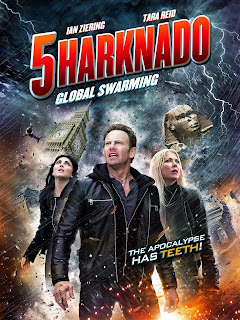 Finn and company are back...except for his eldest Son, his Mother and his Father (the latter two of which are too busy to be here)...and end up in London to talk to NATO.

Oh and Nova is back, since this is an odd-numbered Sharknado Film.  You know the rule. 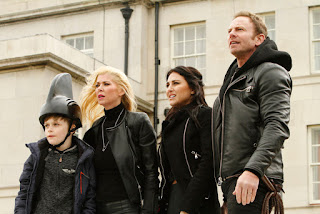 Finn immediately gets side-tracked to go rip off Indiana Jones with Nova.  They take an artifact that is supposed to stop Sharknados from happening...so, of course, taking it causes all of them to happen this time. 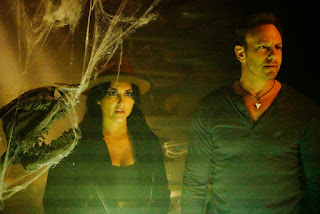 The Film is rife with Cameos, though you would often be hard-pressed to recognize all of them.

We can't get Hasselhoff back, but we've got Chris Kattan, Charo, Fabio and Olivia Newton-John. 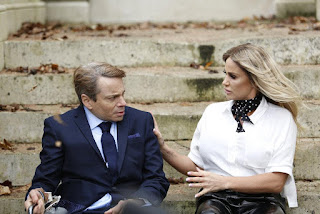 The Sharknado destroys most of London and takes Finn's son Gil, since that's how they work now.

It also now features a magic portal, giving the Film an excuse to jump around the World. 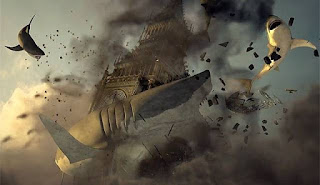 Its worth noting that the International theme allows them to use people not famous in America, but, I guess, famous in other places.  So, in other words, I'm happy for you if you know who this is, but I sure don't! 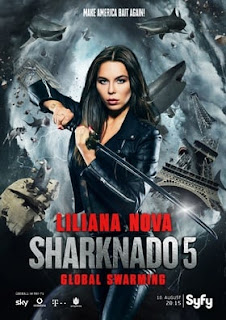 This is still going?

Okay, so more 'Celebrity' Cameos, more fake Sharks, another Wrestler (John Morrison/Mundo/Hennigan/Nitro/Impact) and a stupid Plot that sets up the final (promise?) Film.

To see how it all plays out, watch the Film (if you hate yourself). 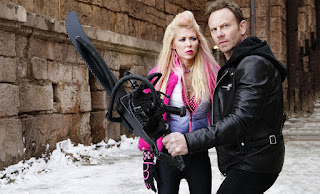 Sharknado 5 is really, really stupid.  It suddenly introduces lore involving a Shark God, a magic gem, a teleporting Sharknado, Fabio as the Pope, Charo as the Queen of England, toxic waste turning a shark swarm into an amorphic shark pile and, well, lots more stupid.  Most of the time, the references are either very forced- Olivia Newton-John warning them not to 'Do anything Physical'- or too obtuse to really matter- a Q-like Character is named Llewelyn after Desmond Llewelyn (who played Q).  The physics of this whole thing continue to boggle the mind.  In one Scene, you can punch and kick sharks away.  In another, sharks fly at you like missiles, taking a leg off with no effort.  In another, they fall towards you and just crush you.  In yet another, they fall towards you and make sure to bite your head off.  At one point, the shark pile thing emerges from the water (how? why?) near Okinawa and they proceed to say that 'it is headed towards Japan.'  That is Japan, you idiots!  Oh and they use Bai Ling and Margaret Cho for the part in Japan, even though they are Chinese and Korean-American respectively. So much of this is stupid- like Gil being given a helmet that somehow protects you from Sharknados while inside of one. So much of this is pointless- like letting Kattan survive getting his leg lopped off just to kill him in the next Scene. This whole thing is just stupid and I'm not even laughing ironically at this point. By all means though, make one more Film and exploit my childhood some more... 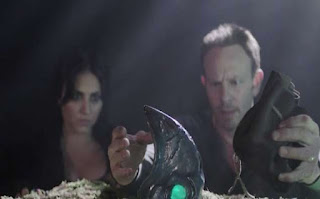 Another stupid, stupid Film.  The charm is all gone, as it just keeps going and going, no matter how much my mind tries to make it end!
Posted by Alec Pridgen at 6:00 PM