With a Title like this, how could I say 'no?'  Just in time for the release of Call of Duty: Black Ops III- Marsupials, here is this flick.  Today's Film is Zombie Ninjas vs. Black Ops, a 2015 Film that comes to you from the land of Ninjas: Australia.  Eh, it has got at least two 'As' in the name, so close enough.  The Film is about...well, you can probably guess.  What you wouldn't guess, however, is the tone of the Film.  Despite the Troma-style Title, this Film is pretty much played 100% straight.  Alright then.  The Story involves mutated super-soldiers, the plot from Die Hard and lots of fighting.  What kind of Stars do we get?  From the Director of, um, Deadtime and the Writer of...also Deadtime, comes this one.  As a side note, IMDB lists the Director as being known for Deadtime, Knowing and Zombie Ninjas vs. Black Ops.  Who was he in Knowing?  He was 'Patrolman,' so...no, I don't know him from Knowing.  Among the Ninjas, you have 'Steroidal Punk' from The Wolverine, 'Dave's Crony' from Son of a Gun, an Uncredited 'War Protester' from an Australian TV Documentary and, last but not least, some guy who appeared on 2 UFC Specials between 2007 and 2013.  The Stars are out!  You don't care about my 5 minutes of IMDB Research though- you want to know if this is good or not.  To find out, read on...

The Film just kind of starts as a bunch of people in an Office Building are attacked by some mysterious guys.  Alright then.

The Film proper starts with this Aussie Gent having an Interview in the middle of the night- which the Film lampshades- with some mysterious Company.  His Black Ops background is key.

Meanwhile, more people are killed by the mysterious, jumpsuit-wearing killers.  What are they?

It sure would be easier to tell if the Movie wasn't lit like, well, an empty Office Building at night.

Did all of the Budget go into Guns and Jumpsuits?

As our Cast gets smaller, they continue to be confronted by these creatures.  They are vicious and sure do love to use Karate on your ass!

If you doubt that these guys are Ninjas, check out these Scorpion-style eyes!

Can our Heroes survive the assault of these Zombie Ninjas with their Black Ops skills?  No SPOILERS here.  The End.

Fighting.  Lots of fighting.  Like LOTS and LOTS of fighting.  This one is alot more serious than you could possibly imagine.  There must have been some sort of miscommunication between the Writer of the Film and the people in Marketing.  One of them made a serious, straight-laced Movie with lots of fighting, while the other decided to sell you something silly.  If you can't sort this out, get back to me when you can!  In all seriousness, this one isn't bad.  The problem is that it is kind of one-note.  The Action here is good, but that's about all you get here.  I'll also say that, while not SPOILing anything, they use a Drama-extending Cliche one times too many.  It is effect- if route at this point- one time, but just kind of silly when you do it twice.  If this one was shot more clearly and with more Lighting, this would be an easier recommendation.  An Action Film that you can only see like 2/3 of is a bit harder to sell.  As it is, the Film is decent, but kind of predictable.  With some more money, more lighting and a stronger Story, this one would totally work quite well!  Speaking of working, let's see if these Black Ops vs Zombies can match up... 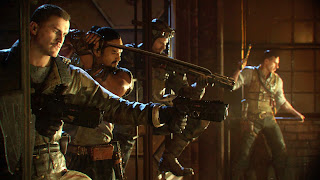 Next up, a Film about killer insects that also comes up with lots of hype.  What will I De Do Do Do, De Da Da Da after I see this one?  Stay tuned...
Posted by Alec Pridgen at 11:52 PM