Thank you, Cracked.  A while back, they promoted a whole bunch of Films that were supposed to be good or, at least, interesting.  One of them was White God and you know how that turned out.  This time, it is Stung, a 2015 Sci-Fi Horror Film.  Featuring Lance Henriksen, this Movie is about a fancy Dinner Party that is overrun by killer Wasps.  Well, it was already full of the other kind of WASPs, so fair is fair.  All hell breaks loose, leaving a nice pair of people in the middle.  The Film is notable for featuring some crazy visuals, a bit of CG and many Practical Effects.  Yet again, another 2015 Sci-Fi/Horror Film featuring a Monster, Lance Henriksen and Practical Effects.  Naturally, a certain Austrian hates this one too!  Do I though?  To find out, read on... 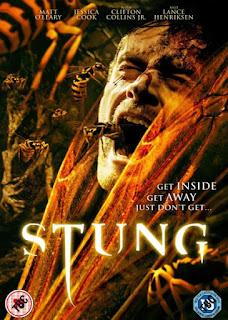 A man with some mysterious issue from his past agrees to help an old friend set-up/work at a Dinner Party for a Mayor (Henriksen). 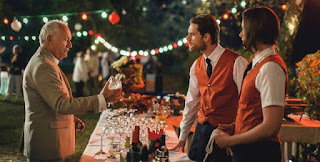 After a bit of build-up, some Wasps suddenly swarm out of the ground and start attacking.  Their sting is deadly, but that isn't all. 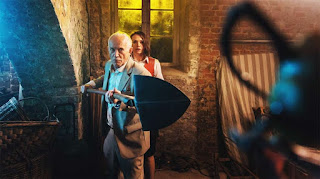 Without SPOILing too much, they end up with some giant Wasps that are all sorts of freaky.

THIS is how you show off Practical Effects.  Make them big, ugly and in-your-face! 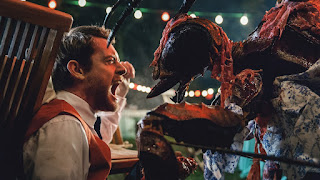 The group gets trapped inside the House and tries to survive...but a secret will make that even harder. 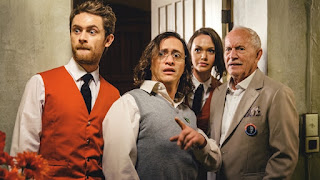 Can our Heroes survive and live to tell their Story of heroism or will they become Wasp food? 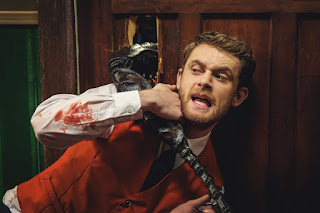 Naturally, things get all sorts of bloody...but that's all I'll say.  Watch the Film, folks.  The End. 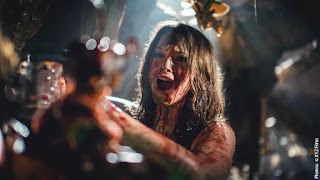 Pretty good stuff, actually.  Despite what some people I know have said, Stung is some good, fun stuff.  The Monsters start out freaky enough and the Film engages in some fun splatter effects.  The Wasps turn into what looks like what would happen if you hit a giant Mounds bar with a hammer when they go splat.  When stuff happens and they get bigger, they are even more fun!  The Film really highlights their use of Practical Effects, filming and framing them in just the right way.  There is some CG, but it is only when it is necessary.  In other words, when giant Monsters have to start flying around real fast, they aren't a model.  I don't know about you, but I can't imagine the logistics of how that would work with a 10-foot polystyrene model!  The Characters aren't too complex, but they are fun and effective.  The people who are important get built up properly and you want them to make it out alive.  Some people may take issue with some of the fast-paced Editing in a few Scenes, but they only added to the chaotic nature of the moments for me.  My opinion and your's may differ (even though mine is better).  Stung did not disappoint and I think it is something that fans of newer Sci-Fi/Horror like Big Ass Spider will really enjoy.  It sure can't be any sillier than this... 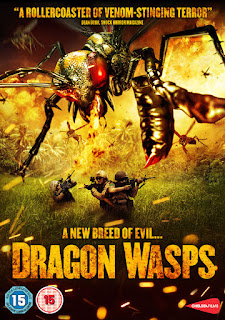 Next up, another new Film that promises to be good.  Promises are one thing, so we'll see.  Stay tuned...
Posted by Alec Pridgen at 7:21 AM