The true evil is to let companies keep making Direct-to-Video Sequels like this!  Today's Film is Monsters: Dark Continent, the 2014 Sequel to Gareth Edwards' surprise hit.  He was too busy making the world's most tedious Godzilla Film, so he merely serves as an Executive Producer.  In other words, they paid him some money to go 'Yeah, I'm cool with this.'  Why don't I get that kind of offer?!?  This Film jumps ahead some time and basically changes the facts to suit their needs.  When in doubt, cheat!  This is being highlighted today due to it focusing on some Soldiers.  I've had worse excuses to review a Film- right, Pocahauntus?  With more money and attention being presented to this one (on the Video Market, at least), will this fail or fly?  To find out (mostly), read on... 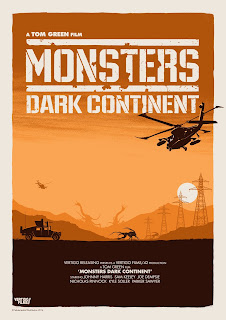 In the time since Monsters, the World has basically gone all District 9.  Dog-fighting- how classy!

Our Heroes are 4 Soldiers who, let's be honest, are kind of assholes.  Thanks for your fictitious service...but you are really unlikable for the most part. 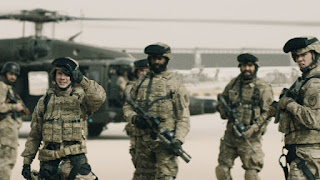 Now here's the rub: the Monsters are now in the Middle East...somehow.  How did they get out of Mexico again?

The other question- why are people still fighting with the U.S. Military when they are Lovecraftian Monsters walking around?  Prioritize, people! 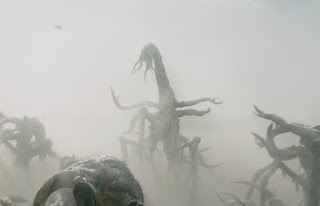 As the action (occasionally featuring the Monsters) escalates, can our Heroes survive? 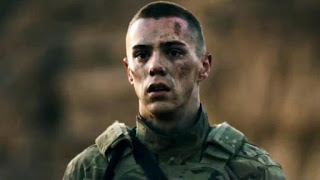 Or will the stress (and all the violence) be the end of them?  No SPOILERS here, so...the usual. 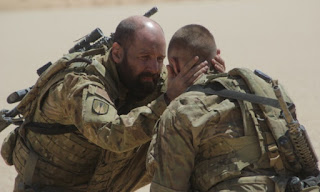 War is hell...but probably more fun than this one.  Monsters was not a great Film, but it had a unique feel.  For better or worse, Edwards had some interesting ideas for the Film.  This one- not so much.  Just imagine if the second half of Full Metal Jacket (the part people barely remember) took place with random Monsters showing up.  The creatures barely do anything here, so it is almost a wonder why they are here.  I believe the term 'contractually-obligated' is appropriate here.  Supposedly the Writer had pretty much free reign for the Story, as long as the Monsters showed up.  That feels about right.  The first time our Heroes run across the creatures, they fly past one and laugh.  The second time: they kill it with some Shotgun blasts.  No, really.  You can demystify the things to a point, but this one goes past it.  The things look cool, but just don't do enough to make this worth it.  On top of that, the Tone is super-bleak, the Characters aren't likable and the Film just isn't all that fun to watch.  It could have been something interesting, but it just kind of...well, sucks.  The best part- when they flat-out copy a Scene from the Original for no good reason. 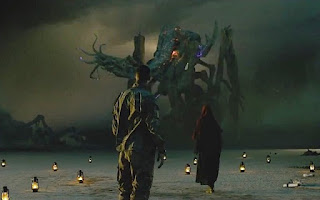 I hope you thanked a Veteran today...and avoided disappointing stuff like this.  Sorry, Movie.
Posted by Alec Pridgen at 11:52 PM