I may be cheating a bit, but this turkey has 'Indian' in the name.  Today's Film is Godmonster of Indian Flats, a fairly-obscure piece of trash.  If you know this kind of trashy Films, you may know this one.  If you don't, this one will be a real surprise.  The Story involves a number of random things that include a Scientist, a Monster, some Industrialists, a Western Town in the Modern Age and some vague science.  It is a real mess.  On the plus side, I avoided Thankskilling yet again!  This is just plain bad.  To find out what kind of rancid gravy this one emits, read on... 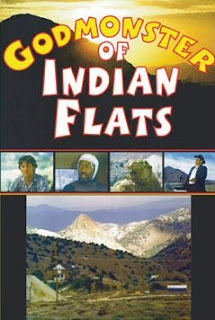 This Story involves a Sheep Farmer- not Seth MacFarlane- losing his money in a Casino.

Hey- stop looking at the Camera! 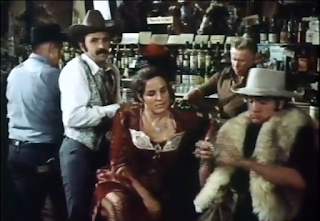 That night, he's confronted by....um, glowing sheep or something.  Pardon? 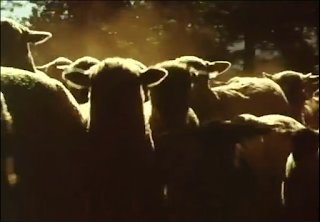 It all has something to do with weird gas released by an industrialist while mining in the Flats and the creation of some odd, sheep-like creature. 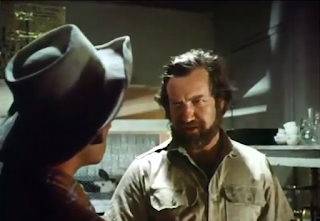 Quick note: it is not good when a Video does this to you.

I could have cheated and just stopped there, but I dared go on- for you! 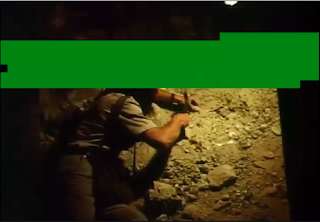 With a ton of random moments and Plots, this one just meanders.  It also talks right to you...or at least appears to.  Good technique, Director! 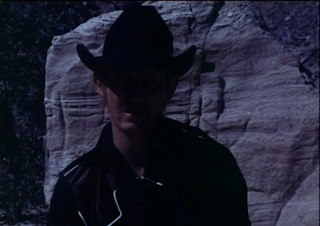 I will just end by showing you the creature, pictured here dancing with a Hippie.

It is now that I realize that Cemetery Gates stole from this Movie!  How sad is that?  Ugh.  The End. 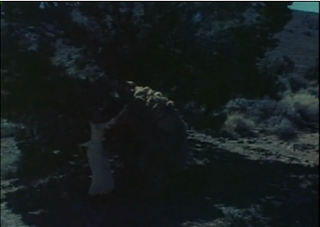 Ugh.  This one is just filled to the brim with nonsense like a Turkey full of Stuffing.  Can't I just get a stupid Film with a lame Monster?  No?  Instead, I get Hookers, an evil Industrialist, a lynch mob, some Hippies, a narrating Scientist and all sorts of other crap.  How do you fail at making a simple, B-Movie?!?  On the plus side, they didn't make it into some sort of Christian Parable about not doing drugs.  I haven't forgotten you, Blood Freak!  This one is just kind of dull and listless, not even letting you enjoy their stupid creature.  Unless you are a real sadist, keep skipping this one.  Speaking of the Monster, someone was dumb enough to let himself be credited for making it! 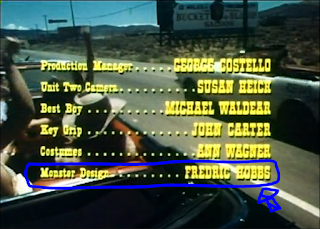 Have a happy Turkey Day and avoid turkey like this.  Oh and Dressing.  I didn't use that one yet, right?
Posted by Alec Pridgen at 1:00 PM