A good movie that just happens to be short on ideas.  Today's film is Hands of the Ripper, a Hammer film that has gotten a major cult status over the years.  It has a Blu-Ray release, while films like Rawhead Rex hasn't been released on DVD since 1999.  Yes, that still bothers me.  The plot is a curious one, as it tries to delve into Psychoanalysis.  For one thing, it's 1971, so not all of it is all that credible.  Second, this is a Period Piece Thriller, so the main character is a follower of Freud...while he's still alive.  My main problem- which I'll go into in the review- is that the film is kind of one-note.  It's an interesting note all the same, but it doesn't have much to say.  I don't hate the movie, but will have to attach that caveat to any recommendation.  To find out more about this film that you may not have seen yet, read on... 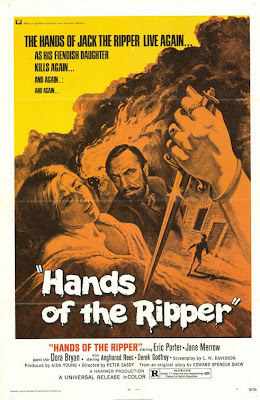 The story focuses on two people: a Doctor and a young woman.  She's the daughter of Jack the Ripper and saw him kill her mother.  Years later, she meets up with this man after... 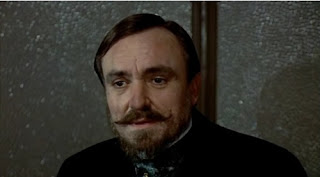 She inadvertently kills the woman who took her in as a child.  To be fair, she was under hypnosis (more on that later) and the woman was selling her virginity to a rich guy.

Yeah, you got poked instead, lady! 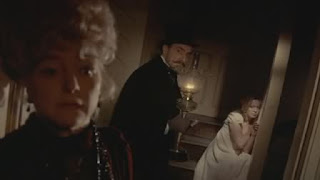 Even though he could *wrongly* set up the rich guy as the killer, the Doctor blackmails him into helping him find out about the young woman.  This plot thread doesn't really go that far, but does establish the problem with our hero- his obsession. 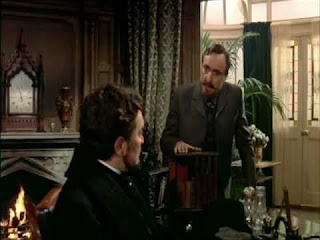 The problem is that our heroine is susceptible to a very specific post-hypnotic suggestion.  She has to see a glinting light and then be kissed on the cheek in order to make her go into a rage.

To be fair, the second part of the trigger does build up suspense.  However, you know it's going to happen every time! 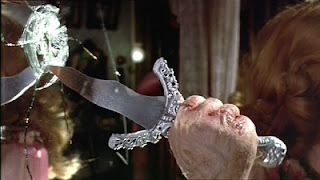 As a whole, this sums up the film really well.  It's got window-dressing (a sub-plot with a son and his blind fiancee), but is mostly just about this exact scene (tweaked only slightly).

I don't really have anything else to say about that.  The End. 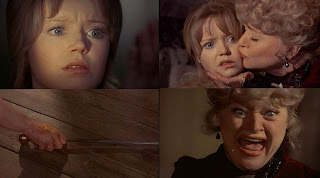 Good for a bit, but pretty one-note.  The film is not bad.  It does a great job of setting up the characters, setting and story.  I have no complaints in that department.  I will say that certain characters are introduced only to die (a staple we see a lot these days) and others exist only to pad out the run-time.  I'm sorry, but I did not care about the son.  Hell, even his blind fiancee is a blatant bit of pandering to an audience too.  This character really has no place in the film.  The biggest problem is just repetition.  The film eventually becomes a way to pass the characters from one kill scene to another.  Run away- find a prostitute.  What happens to the prostitute?  She's killed.  One psychic lady even meets the same fate as the Paranormal Expert in Paranormal Entity- exposition, exposition, die.  At least the one in Paranormal Activity 3 was only in the trailer (yes, this also still bugs me).  The other thing is the character of the Doctor- he can't take a hint.  After thinking that the girl killed her faux mother, he takes her in to study her.  After the second killing, he covers it up.  The same with the third and fourth killings too.  You have to be REALLY obsessed with being against Capital Punishment to hide actual murders to further your cause.  His obsession passes the point of logical reality for me, taking me out a bit.  As a funny side-note, I like that the town is running through the streets with torches after a *single woman* is killed.  I get that you dealt with Jack the Ripper a decade or so ago, but it's still a bit silly!  If you can accept the simple, one-note premise of the film, it is chock full of atmosphere and is overall good.  Just remember- it's all this guy's fault!!!

Next up, a terrible film that I only bought because I hate myself.  Ted V. Mikels is back to torture me once again!  Stay tuned...
Posted by Alec Pridgen at 3:06 PM