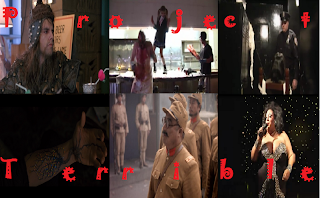 Austria is politely-invited to screw themselves.  Today's film has an awkward and silly history.  Back in 1980, the film- The Nightmare Never Ends- was made.  It stars Richard Moll- with hair- and Cameron Mitchell.  Apparently it didn't do all that well.  As such, it was taken five years later and Edited into one of the most infamous horror anthology films of all-time: Night Train to Terror.  Like anybody who has one of those '50 Horror Movies' sets, I actually own that film.  Fun side-note: that set also has a film about the Mormon's trek to Utah...also starring Richard Moll (with hair).  Weird, right?  Anyhow, this film combines a few things that you could not consider putting together.  Namely, Satan, the Holocaust and disco.  It's that kind of movie, folks.  Sadly, I could not get proper pictures via YouTube, so you'll have to make due with re-used ones from the 'Net.  Will Maynard- of his titular Horror Movie Diary- be the one to break me in this Round?  To find out, read on... 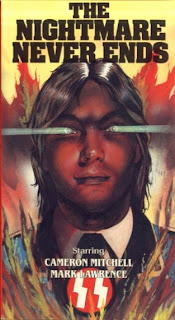 We begin in Nazi Germany...or rather with a woman seeing visions of it.  These are brought on by a hypnotist, who is subsequently killed by some evil force.  Meanwhile, an old Jewish man wants a cop (Mitchell) to go after a rich guy in town.  That man bears an eerie similarity to this Nazi... 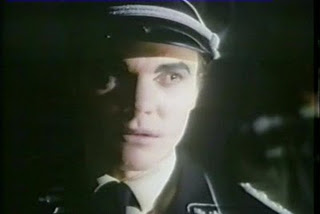 At this point, the movie breaks down into two real sections:

* The Satanists- led by the evil Nazi- are trying to court our heroine's husband (Moll) due to his belief that 'God is Dead.'

* Random people who threaten the Nazi die in some weird, flash editing.  Giant snake in one, while killer fog is in another. 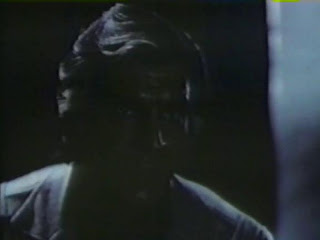 All of this relates to the mystery of an old Jewish man's wall.  Will Mitchell solve it in time? 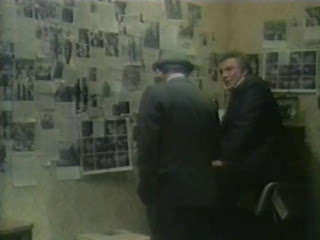 Well, this movie was about Satan and made at the tail-end of the '70s, so the answer is 'No.'  Satan/Nazi Guy escapes every murder attempt, even if the way he does it makes no damn sense.  The End. 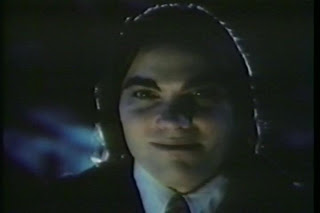 Get off the train!  The plot of this movie certainly could have been interesting.  One way would have been to make the idea of the Satan character mysterious.  Is he evil?  Are the people after him crazy?  If they hadn't answered that in the first twenty minutes or so, there could have been some real tension.  Another way would be if the plot was more focused.  Instead of focusing on the main character's quest for truth about the Satan guy, they put in about six different plots.  We have the plot with the writer (Moll), the scenes of the lead trying to convince him to change his mind, the four different quickly-resolved set-ups for murder attempts on the Satan guy, scenes involving people warning our hero and the random visions.  On the plus side, if you don't like the film's plot, it never stays focused on it!  The film is full of interesting imagery...that amounts to nothing. How come Satan turns into a giant snake to kill the one guy?  How come they spend half the movie setting up Moll being taken in, just to kill him off randomly when he says 'No' for the first time?  How does killer fog work?  The worst part, honestly, is nothing that you can necessarily blame the filmmakers for.  The only versions available for this film are, well, crappy.  Let me tell you something, you get very little use out of an HDTV if you're watching a VHS-Rip converted to an FLV file via YouTube.  For a disc, you're pretty much stuck with a cheap, Mill Creek disc or a Troma release.  Regardless of the picture quality, this film is a little Terrible, but not a lot.  Strike a pose! 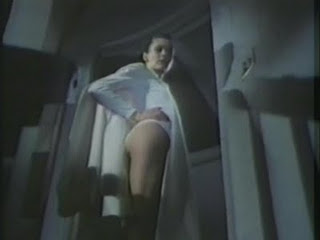 Next up, Cinema Gonzo gets the last shot at my sanity.  If you wanted to see Birdemic without the birds, this is your movie!  Stay tuned...
Posted by Alec Pridgen at 6:46 PM