Welcome to Brian De Palma's wet dream!  Today's film comes to us from Japan.  What does that tell us?  One- the movie is going to be weird.  Two- it's going to feature some 80 lb Japanese women in the lead.  Three- there is probably going to be J-Pop.  Thankfully, the last part is not true here, at least for the most part.  The film is another movie by Kenta Fukasaku, the man who brought us Battle Royale II and Yo-Yo Girl Cop.  I'm sure that I can expect a random, bi-polar film that is inexplicably-violent then.  This film is oddly-paced and has a narrative trick to that is both baffling and, at times, annoying.  I'll go into more of this in the full review.  Get out your O's as we prepare to go... 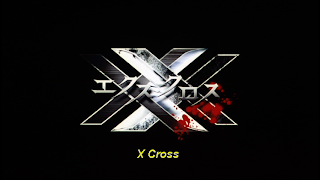 The film begins In Media Res with one of the young women getting a phone call warning her of the villagers, followed by them trying to bust down the door.  This is followed by the woman and her friend going to a small village's spa.  Ruh roh! 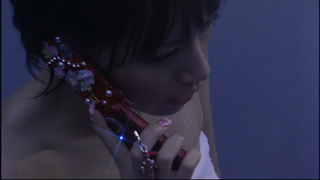 The duo get split up and the first young lady is chased by the mob.  We only hear the friend over the phone before this side of the story stops and... 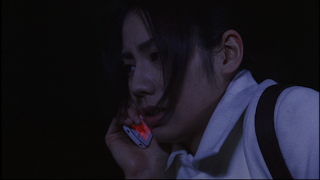 You're kidding me!  This movie is just going to constantly cut between 'Chapters' to show their parallel stories.  That's unique...but also kind of silly.  It's especially-silly when you consider that one Chapter is only two minutes long! 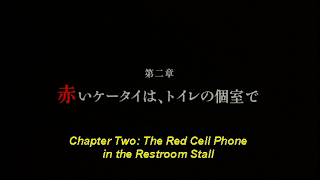 As if the film wasn't weird enough, the friend's Chapters involve her being chased by the ex-girlfriend of some guy she stole.  Oh yeah, the lady is trying to kill her with GIANT SCISSORS! 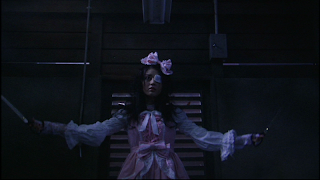 In Chapter 4, the two fight in a battle between Giant Scissors and chainsaw.  Only in Japan, folks! 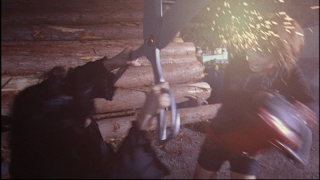 Getting back to the, you know, plot, our heroine is captured by the villagers, who are part of a cult that cuts the leg off the women, so that they won't leave while the men are out hunting.  What happened to locks on the inside? 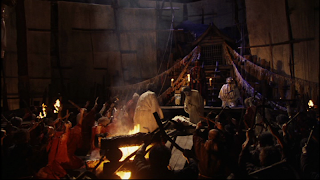 Thankfully, all of the plot threads- including a man who was on the phone the whole time and Giant Scissors Lady- come together, leading to an odd finale. 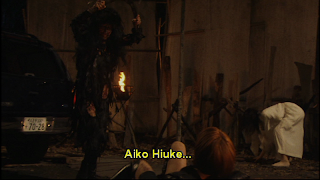 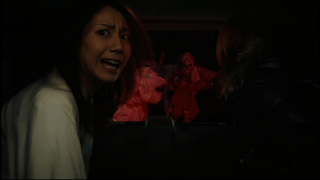 Chapter Four- Wrap Up Paragraph!  The plot of this movie is interesting and definitely has potential.  The problem is that the gimmicky execution will turn a lot of people off.  It was very distracting for me, but I'm sure that a lot of people will just plain hate it.  On a related note, why is the lady with the Giant Scissors in this movie?  It's like they took one of the unused characters from Tokyo Gore Police and stuck it into this movie!  This is by the same guy who wrote Battle Royale II's script- which is full of random anti-American rants- and made Yo-Yo Girl Cop into a somber drama.  I guess I should expect something like this, but I still didn't.  I'm not saying that the film is terrible or anything, but the choices made really shrink the market for this.  It's weird, random and totally Japanese!  Take us away, totally-not-creepy greeters for the village... 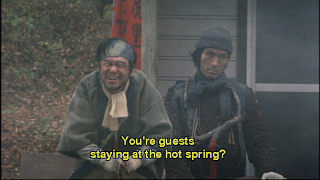 Next up, a movie whose plot synopsis promises something gory and dark.  The actual film- not exactly the same.  Stay tuned...
Posted by Alec Pridgen at 11:58 PM