Not to be confused with 1996's Fear.  Today's Film is The Fear, the Film that is actually the *precursor* to a Film I watched long ago.  I needed a Halloween Film without Michael Meyers and found The Fear: Halloween Night.  In retrospect, the Title does make it sound like a Sequel, but I sure as hell hadn't heard of this Film at the time.  Here's the thing: it isn't really much of a Sequel.  It is to this Film as Halloween III is to Halloween.  Although even that isn't completely fair.  That Film is basically a slight rehash of this Film, but without any continuity that I can see.  Unless the guy in that Film is the kid from the end of this Film, they are not connected.  So that is basically an even worse version of Damien: The Omen II?  Doesn't that already exist (in the form of 666: The Beast)?  So, with all of that aside, what is the Plot?  A guy wants to do an exercise for his Psychology Thesis Paper about people battling their fears.  To that end, he takes them to the Cabin where his Mother was killed and...yeah, you can see a slight problem here.  'Morty' shows up for the first time here.  He's a man-sized Wooden Doll that somehow channels your fears.  They can't agree on how it actually works here, so leave that for the Sequel (to make more confusing still).  There is only one real notable name in the Cast and his appearance here shows where he was at this interesting point in his life.  The Director here only has this credit as such, although he did Write for what appears to be French C.S.I.  A year after this, he did work on Space Jam...as an Assistant Location Manager.  To see what there is to actually fear, read on... 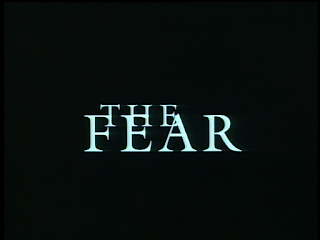 Opening a Horror Film with what is obviously a dream- so original.

Basically, you have Shadowy Figure, Scared Kid and Weirdos in Mask.  More on them at the end. 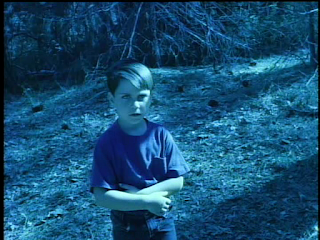 Our Hero is the guy who's having the dreams and he goes to his Professor to get approval for his Thesis Project.

Well, who better to help you with dream-based fears than Wes Craven? 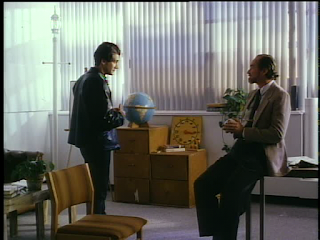 He goes back to his Childhood Cabin with an assortment of people that includes his White Friend with Dreads, a Black Couple, his Girlfriend and his Friend's hangers on.

Also at the Cabin is Morty.  He's a doll that our Hero told his secrets to...but also was his boogeyman.  Confused? 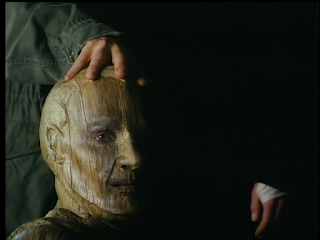 After a dramatic day of his Exercise, they go to visit the scariest place on Earth- Santa's Village!

No, this is not a Christmas Film.  His Uncle just shows up and actually works there.  This is for you, Mick Foley! 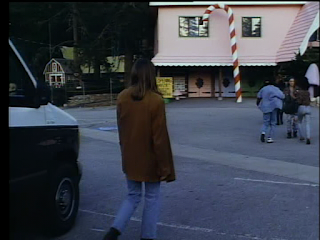 I feel the need to point out that the Uncle tries to scare them with a Story of Black Peter, who is this guy below.  Saint Nick doesn't exist, but neither does black-face.

Is that a net positive? 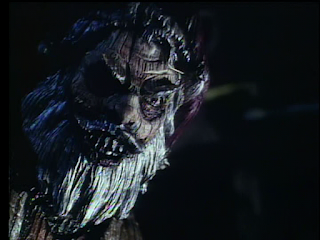 They apparently stay there all day, as night comes during their visit.  Least believable part ever!

Oh and Morty possesses the Black Girl who believes in Reincarnation by trapping her on this train (which goes about 4 mph) and apparently raping her.  How does...why would...oh, screw it! 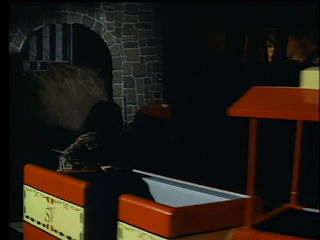 Things get all sorts of crazy as the Film finally remembers that it is Horror.  So we get...

- Dread Guy's Sister is revealed to be his Mother (after he kisses her) and he runs.  Morty ages her to death.
- Dread Guy was apparently the Campus Rapist, but is killed by...fear, I guess (and a head smash).
- Black Guy is found dead in Santa's Village and placed on a cross (since he hated Religion).
- Morty possesses Black Girl, jitters about and leaves her body when she falls off of a ledge (since he feared heights).
- The Uncle turns out to be the guy who killed Hero's Mom and is killed by Morty with a gun. 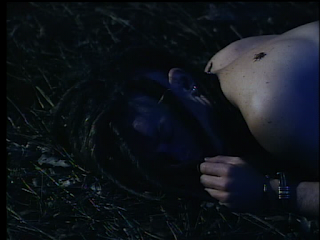 Our Hero comes to the realization that he 'killed' his Mom by telling his Dad about the affair.  That is then immediately undone with the Uncle reveal...so his 'dream young self' helps him solve a random puzzle and he escapes.

That is the best summary you'll get for this! 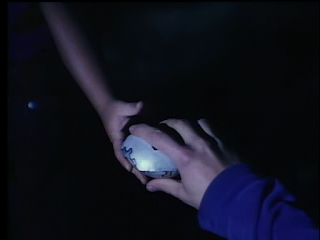 In the aftermath, our Hero quits College and talks about how the Police want answers.  Good luck with that.

Oh and Morty pops back out of the Lake for the Sequel...which ignores this Film.  The End. 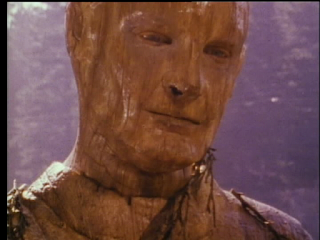 This is not schwifty!  Right off the bat, I have to mention one thing.  Supposedly the DVD I have has been quite censored.  I've only seen THIS Version though, so I can't confirm that.  That would explain how choppily-Edited a few Scenes were.  Regardless of that, the Film kind of sucks.  It can't agree whether or not it wants to be full of jump scares or psychological Horror.  It will feature weird dreams and people talking about their fears...and then obvious jump scares.  It also features some confusing and vague magic for Morty.  He's somehow in two places at once (at least) and in disguise AND controlling people AND copying their voices.  What a Morty Sue!  It is just kind of dull for the first 40 minutes or so though.  The final half is so back-loaded that it is almost silly.  For example, White Guy with Dread is mad at his Sister's new boyfriend, that guy dies, he kisses his Sister like she's his girlfriend (which is fine, I guess), finds out that she's actual his Mother, freaks out AND she dies within a five minute span.  Good Lord!  Whether it was cut or not, it is still bad.  The 'Sequel' still has the pacing issue, but is less full of itself and goofier.  In addition, this Version is hard as hell to see anything in (another problem supposedly with THIS release).  At least they were 'classy' enough to cut to this Statue during the first Rape Scene... 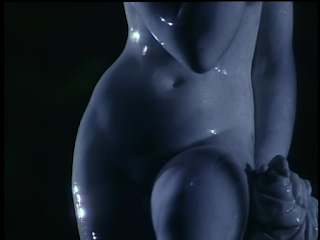 Next time, Andy Sidaris is back for more silliness.  This time, more Cinemax stuff.  Stay tuned...
Posted by Alec Pridgen at 10:35 PM