In Space, nobody can hear me say 'Ugh!'  Today's Film is Recon 2023: The Gauda Prime Conspiracy, a 2009 Sci-Fi Film.  I will forgive you for not being familiar with this one- you have no reason to be.  Basically, I have a connection to this Film that does nothing to make me actually like it.  Back in the day when you could walk into a Hollywood Video or a Blockbuster Video- the halcyon days!-, you'd find this kind of junk all over the place.  In fact, that's where I found the original Film- Recon 2020.  It isn't good, but you can forgive some of it because of the Budget.  Bob saw the 2nd Film- Recon 2022- and didn't have much good to say about it.  I haven't, but...why would I?  Now, after years of lingering in my Netflix Queue like some sort of mole in a spot where you can't quite deal with it, Recon 2023 ended up at my house and got a watch.  I'm less forgiving of it now.  If you haven't watched the previous 2 Films, don't worry.  Continuity is not exactly important when you can barely muster a Story, after all.  Said Story involves some evil Aliens with a dream machine- damn you, white noise!- that is apparently affecting all of humanity.  The plan: find it and disarm it.  You'd think that a Story this simple would be nigh impossible to screw up.  You could make it uninteresting- sure, I'll grant you that- but it would still make sense.  Not so much here, but the reasons are a bit complicate.  To find out why you should be glad you never spent your $1.99 on this, read on... 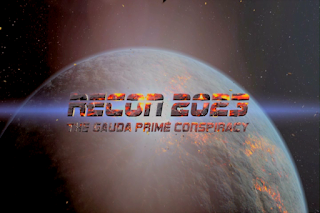 So that crazy Greek from the History Channel was right- he was just off on the timing! 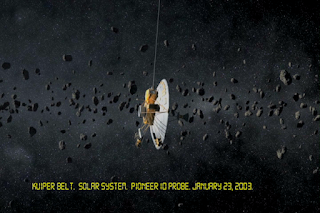 Their goal: destroy us!  They succeed.

The real tragedy: this negates such things as the cure for AIDS in 2004 (Firepower), the end of mankind's technology in 2013 (Escape from L.A.) and the birth of Rutger Hauer-bot in 2016 (Blade Runner). After that, we see some Space Marines (thanks, Aliens!) crash their ship.  One of them sees something freaky (below), but it was a dream.

This idea is 'so good' that they do it AGAIN and expect you to be surprised.  I'm not. 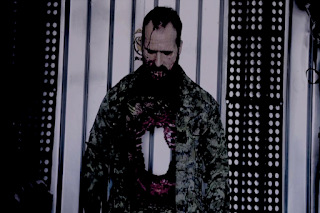 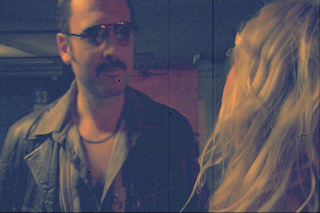 They FINALLY get their assignment to go to Gauda Prime, but even this can't be done with a 'joke' as their C.O. has a Hawaiian-themed Office. 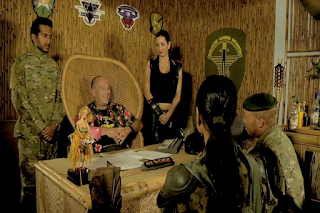 Skipping ahead, we see our heroes finally reach Prime and...just kind of wander around.  Action! 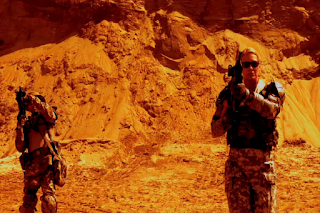 Enough of that- here's a Family Guy-style cutaway gag.  No, really.

The joke is that our Lead is an idiot and was given a Doctorate for money.  Ha? 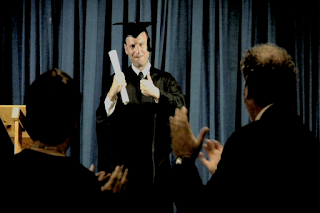 After all of this, there's still like forty-five minutes left!  I lost interest right around the time this happened.  Can you blame me?  The End. 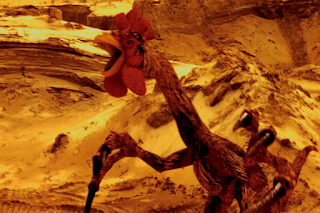 Not the same old crap- just new crap.  The Film is...yeah, it is not good.  The biggest problem to start with: the Tone.  It is a bizarre mix of Comedy and Drama that just doesn't work.  The Actors don't do the Drama very convincingly and they aren't all that funny.  In fact, most of the Characters are assholes.  Don't you just want to relate to and laugh with them?!?  In addition, they way they go about both is all sorts of confusing.  Long, drawn-out Comedy bits right out of the gate- why?  Actual Cutaway Gags in a Film- why?!?  Having a Character killed by a joke one out of nowhere- WHY!?!?  This whole thing is misguided and sad.  It just isn't good.  The actual Plot should be enough for them, but they muddy it all up.  They keep cutting back and forth between Gauda Prime and the Space Station.  It really takes away from what is supposed to be an immersive environment to do so.  The conflict should be a solid one, but even that is hard to follow and/or care about.  Some Aliens are the bad guys, but so is this lady on the Space Station and this burn victim guy.  Why?  There's a whole Sub-Plot about how these Androids are mistreated, but it really goes nowhere.  It is so bad and disappointing that I feel like I have to curse it in Yiddish.  Oy vey!  While it doesn't have a Beholder in it, it does have a giant, angry CG Chicken and that is good enough for me.  Speaking of something thought to be good enough, maybe don't linger on the shot of this fake hand if you can't get the squibs to go off in proper time... 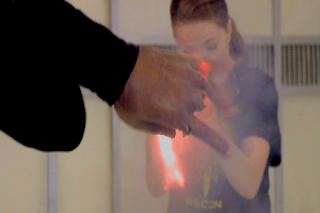 Next up, I knock another Country off of my Horror Film Bucket List.  As a bonus, it is an After Dark Horrorfest Film, so this should be worth exploring.  Stay tuned...
Posted by Alec Pridgen at 5:46 PM