Bigger, louder and just a little bit sillier.  Today's Film is H.P. Lovecraft's The Unnamable II: The Statement of Randolph Carter, a Title that might be a tad too long.  Let's get the obvious out of the way: 'The Unnamable' and 'The Statement of Randolph Carter' are two different Stories by Lovecraft.  It would be like if they made William Shakespeare's The Tempest II: A Midsummer Night's Dream or Dr. Suess: The Grinch Grinches The Cat in the Hat.  Wait- that last one is real!  On the plus side, they didn't just have a guy named Randolph Carter in the first one as a pointless Easter Egg like those Resident Evil Films seem to do.  In this Sequel, secrets of the beast are revealed, people are killed and butts are flashed.  They seemed to have more money to get more of the Suit on-screen and to get some nice C to D-List Stars.  You get such staples as David Warner (one scene), Maria Ford (usually naked), Julie Strain (in a monster suit) and John-Rhys Davies (just the first half).  The stakes are bigger, the Sets are bigger and the whole thing is just plain sillier.  To find out if this one works with more flash, read on... 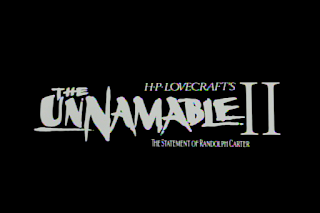 Right away, we get some odd Continuity as the Final Girl never appears, but our other lead is now being tended to by EMTs at the scene (alongside the Police). 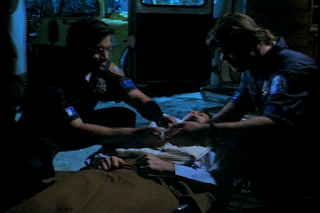 Carter sneaks out the Book he found and tries to decipher.  His Asian friend knows Quantum Mechanics (positive Racism?) and tells him that it is what is written in the Book.  Okay... 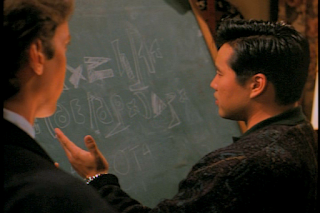 In the Hospital, our other Lead is visited by the Ghost of the guy who died at the start of the first Film, only he now has white hair (aging in Heaven?) and says that the Monster is his Daughter...even though it was his Wife in the last Film. 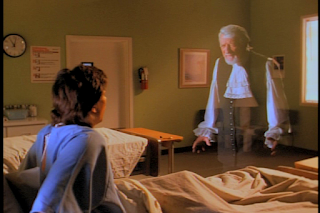 The pair recruit an expert (Davies) who goes down into the Tunnel with Carter to find the truth. 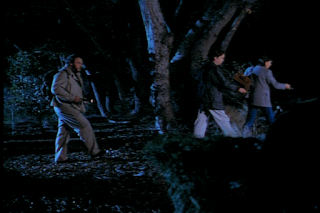 They discover that the Monster is trapped in the Tunnels (somehow) and Davies tricks the Demon into departing the body by...giving it Insulin shock.  Words fail me, Gentlemen. 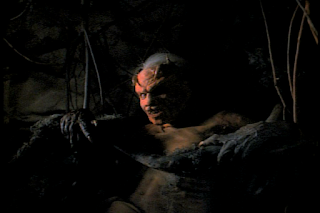 Davies stays behind and gets killed while Carter takes the now-free (and naked) girl (Ford) to the University to document her condition- being someone from the 18th Century.  Magic! 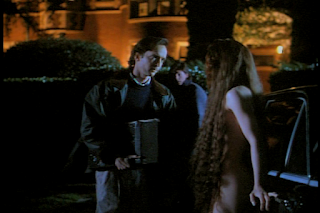 The Creature follows him and goes on a path of destruction.  I'd go into more detail, but I'm getting at least 2 Poor Bastards of Cinema Inductions out of this one.

Oh and the Creature looks different than it did earlier...but I guess that might be explainable.  Why it looked different in our Lead's Dream/Jump Scare is NOT explainable though. 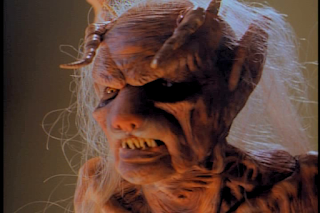 After many, many deaths, Carter stops the creature from re-absorbing its human host by...putting a chair in the way and making it merge with that instead.  No, really. 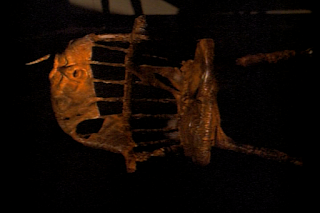 Unfortunately, the girl now ages up to what she should be with the magic gone.  As a bonus, the picture taken by Davies amounts to nothing.  Oh well.  The End. 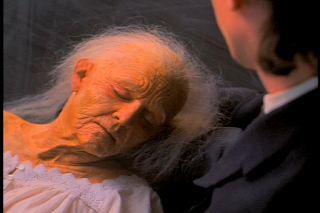 Ridiculous, but kind of fun.  This one is comparable to the first, but also quite different.  The first one was all about being stuck in the House, while this one moves to the Miskatonic University Campus.  The first one is all dark and moody, while this one is far more of a Creature Feature.  Yes, they both feature a Monster (the same one, really).  This one feels like it is more about letting the Creature run wild, rather than building up its mystique.  If you want an old-school comparison, it is like comparing The Creature From The Black Lagoon to Revenge of the Creature.  The Creature- which is nice-looking suit- runs wild in this one, offing people left and right.  Adding to the cheesy nature, you have some over-the-top Acting.  The most notable one for me is the Lady Police Officer (who's name escapes me) who has 2 Emotions: Stewing in Anger and Raging!  Given how wooden her actual Delivery is, it turns out to be kind of hilarious.  With all of that said, this one is goofy, ridiculous at times and much more 'fun' than the original.  It isn't necessarily better or worse- just louder.  Is it too late to start a David Warner Is Not Amused Meme? 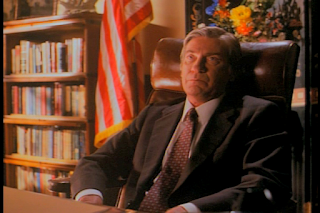 Next up, a recent Sequel that disappointed critically and financially.  Will I be more kind to this Lady?  Stay tuned...
Posted by Alec Pridgen at 6:12 PM