Dare I hope for a good Lovecraft Film not made by Stuart Gordon?  Today's Films is H.P. Lovecraft's The Unnamable, as opposed to Dr. Seuss' The Unnamable, I guess.  Before I begin, let me bore you with some brief back-story.  I got the Sequel (next Review- duh) from Netflix, but this one isn't available.  Thankfully, I found a less-legal source of the Film so that I wouldn't be too lost.  If there is simply no normal way to watch a Film, why should I feel bad using YouTube or DailyMotion?  So this one came out in 1988, right around the same time that Re-Animator did.  Shocking, right?  They aren't really that similar, but they obviously share an Author (sort of).  There's obviously a pretty tenuous connection for Re-Animator, while this one seems to be closer to the source.  The Story involves a freaky creature that kills a bunch of people.  There is *slightly* more to it than that, but not much.  Unlike the Sequel, there aren't alot of notable names here, but that won't stop me from going on.  To find out how this rare Film turned out, read on... 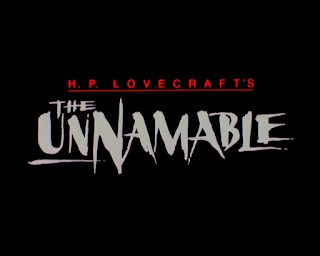 In a flashback, this guy lets his wife out of a locked room...only for her to be a Monster and kill him. 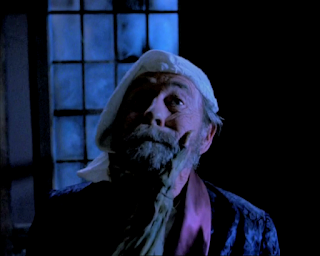 In the present (of 1988), the guy on the right finishes telling his friends this Story about the House behind them.  The guy on the left thinks that he is playing a prank and decides to spend the night... 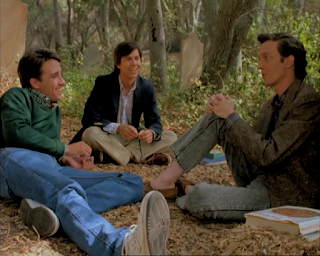 ...only for the Monster (still trapped for some reason) to come out and kill him. 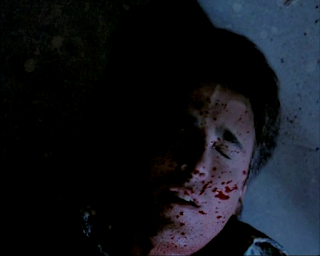 Coincidentally, these 2 Jocks from Miskatonic University take some girls to stay over at the House the next night, not knowing about the creature.  Why all the sudden interest?!? 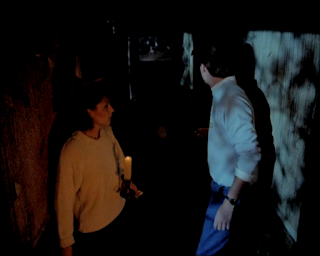 The pairs split up and one of them goes off to 'make whoopie.'  They discover the guy from earlier's head and all hell breaks loose. 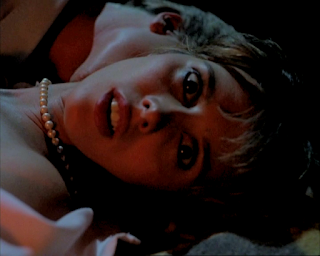 Our Leads eventually figure out that their friend is 'missing' and go to the House too.  They...learn to regret it.  Hi, Madonna. 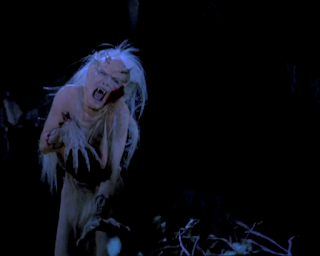 The whittled-down group tries to survive as one of them- Carter- finds an ancient book that may help. 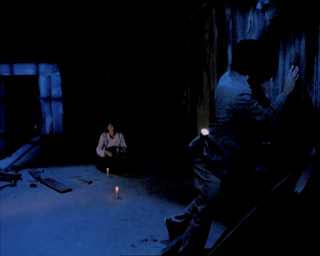 They escape the house, but the creature goes into hiding in the tunnels beneath the House. 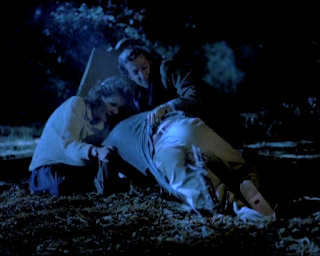 The trio (our Leads and the Final Girl) escape wounded and scared...until the Sequel.  The End. 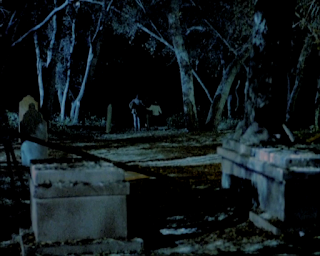 A decent Thriller, but nothing special.  I went into this one with little to no expectations.  I like the Re-Animator Films (well, at least the first 2) and Dagon is quite good.  There are also a bunch of sub-par to bad Lovecraft Films like Cthulhu too.  This one kind of falls in the middle.  They don't really get anything wrong per se- it is just so generic.  They have good Sets, good Cinematography and the Acting is honestly not bad.  Despite all the Lovecraft-related trappings, this is mostly just Monster in House Kills People.  There's not much in the way of big Twists, shocks or otherwise jarring moments.  The Creature looks nice enough once you get to really see it.  You definitely see less feminine Monsters in Film, so that was nice.  I like that they tried to dress this one up a bit- it just didn't do all that much in the End to make it stand out.  Take it away, Cthulhu censoring... 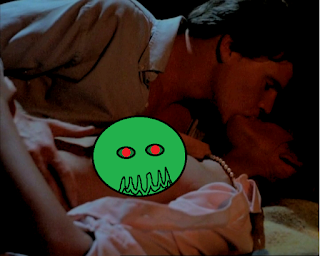 Next up, the Sequel with more C-List Stars than ever.  Is this the superior Creature Feature though?  Stay tuned...
Posted by Alec Pridgen at 10:31 PM