Alright, let's begin this Round right.  Let's see what kind of Monster I'll take on first... 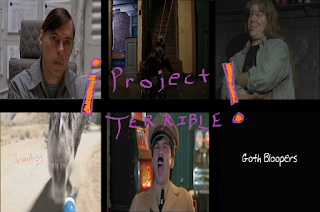 This...is not that great.  It has a 1.9 Rating on IMDB, so clearly I'm not alone in this opinion.  Today's Film is Grim, a 1995 Film that is not about The Brothers and isn't an NBC Show.  Sorry, all 5 people that still watch Grimm.  From the Director of Breeders and Berserker: Hell's Warrior, you get...a pretty disappointing Film.  A mysterious creature is awakened by accident and causes all sorts of chaos.  Can a group of nobodies break into its cave lair and put a stop to it.  I sure hope so!  How many Monster Movies feature Sink Holes as a Plot Point?  The real question- is this Terrible?  It isn't good, that's for sure.  To find out the answer, read on... 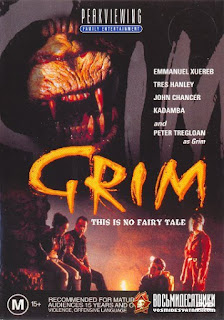 After some pointlessly-floating Credits (someone just found Adobe!), some people with a giant Wishboard unleash Grim.  Why?  Who knows or cares?

A bit later, the creature starts out his plan by kidnapping some lady and walking through a magic wall.  Alright. 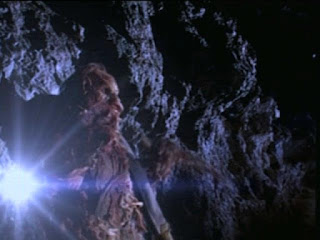 The Cave he's lurking in is much more active and expansive now that he's active again.  As such, the Neighborhood Houses underneath it are beginning to sink.

Since The Descent hadn't been made yet, they let Men go spelunking too. 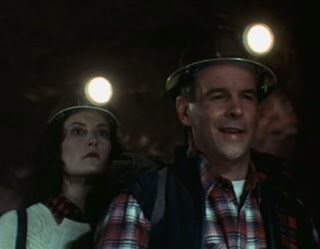 All but two of them are unaware of Grim's presence, so things don't exactly work out too well.  When he's not lurking or attacking, our heroes are just bickering.  Yea. 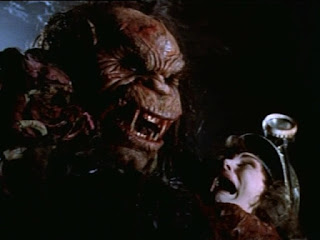 One of them is captured and brought to Grim's lair- the same one where he keeps the lady from the Post-Credits bit.  She's kind of crazy now. 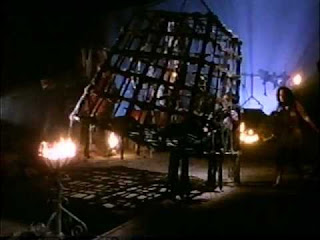 In addition to being ugly as hell, Grim can also possess people.  I know what you're thinking, but he's not Cyclops.  Sorry. 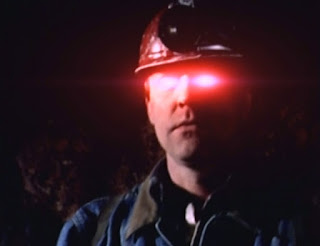 Grim plans to sacrifice this lady for reasons that I can't be bothered to remember, but our heroes put the kibosh on that! 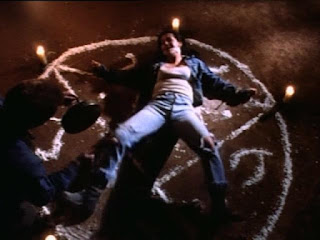 To cut a long Film short, they defeat Grim and make it back.  However, the Final Girl/Woman suddenly remembers that they didn't rescue the crazy lady.

Kind of a dark, random note Film.  The End. 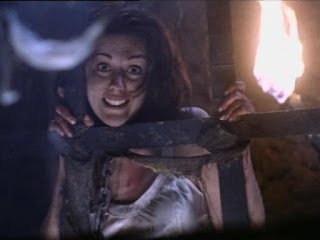 Not good.  Not good at all.  Is that a surprise?  I just wrote about the Worst Directors of All-Time and now I'm dealing with a Paul Matthews Film.  Don't get me wrong- he's not THAT bad.  At worst, his Films are just awful.  In this case, the Film has a neat monster, but not much else going for it.  If you are one of those guys that don't like the design (like the guy who said he looks like an evil Muppet), then there is nothing there for you.  The Writing isn't that good.  The Acting is okay, but not great.  The Atmosphere is pretty lacking.  It manages to be lit at all times by torches- even though Grim sees in the dark- but also lit dimly-enough to obscure the Practical Effects.  Yea- the worst of both worlds!  This one feels like someone saw Rawhead Rex and said 'Do that...but don't spend too much.'  If they don't care, then I don't either.  I'll leave you with an Alternate Cover to another Matthews Film that shows how little of a shit they give for mixing up his Film Covers... 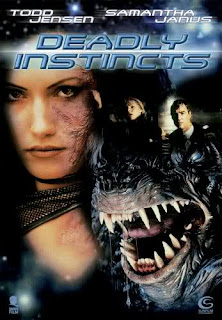 Next up, I get to see a combination Art House Film and Alien Invasion Film.  This should be loads of fun.  Stay tuned...
Posted by Alec Pridgen at 11:54 PM