I ask you a simple question: will this movie have more to do with it's title than the other Fireball did?  The short answer: yes.  The next question: is it better than the Thai action film that shares it's name?  That's a bit trickier to answer, honestly.  This film is a Foreign production, but does feature some American actors in notable parts.  In a nutshell, it's like such films as Strike Commando, Starcrash or Guyana: Crime of the Century- just without the shooting, time-manipulation weapons and suicides, respectively.  I should also note that I did not rent this movie- my brother did.  I just like to mention that for when I get to talk about all the bad and/or silly parts later.  Basically, a guy gets super-powers, goes insane and has to be stopped.  There's a bit more to it, but not a lot.  Get out your burn-powered haircut for my review of... 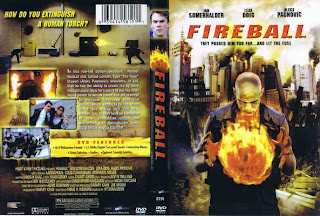 The film begins with our heroes fleeing from an angry, bald man.  Oh no, Batista has finally gone over the edge...more.  This guy can throw fireballs though- hat or no hat- and tosses one in their direction as they try to drive away.  The CG death ball closes in on them and...the movie flashes back to how this all began.  Oh good, you've seen Sunset Boulevard too.  After that cinematic cliche, we are introduced to our villain- a pro athelete.  I knew it- they've always been out to get us!  Actually, this guy is a bit loopy because he has been abusing steroids.  Science-fiction, I say!  We see him have a freak-out when a reporter confronts him at a gas station.  After this incident, he ends up in jail- then things get bad.  The place gets set on fire and he apparently gets fire powers from this.  Why?  It has something to do with the bodily-mutation set about by his overuse of designer steroids.  No, really.  Now armed with these inexplicably-gained powers, he seeks revenge on those who sent him to jail.  Raise your hand if you're surprised. 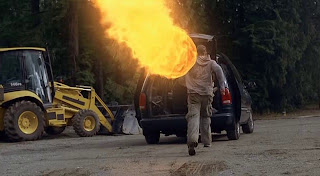 Following that rubbish explanation, we get to see our two heroes try and catch the guy.  Despite the fact that he's completely-freaking nuts, he manages to elude capture, hide his presence and remain elusive.  News Flash: find the steroid-riddled man who is covered in fire!  They also manage to pull a number of fire powers out of their ass when it just happens to fit the need of the scene.  For example, when he gets cornered by the cops and they shoot at him, he survives.  How?  He can heat up the air around him so greatly that bullets melt before they hit him!  Sure- why not?  Eventually, they lure him into a trap and drop a giant pile of sand on top of him.  He manages to escape by melting the sand into glass...which then shatters.  This leads to our heroes having to flee for their life from a giant fireball.  Will they escape?  Will the fire-covered weirdo be defeated?  I'll never tell.... 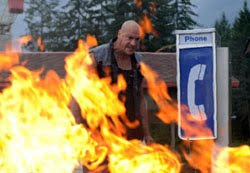 This movie is not good.  The plot is silly, but is not really played much for laughs.  You could have embraced your goofy plot and had some fun!  Instead, they play it straight, having the leads be as dull as door nails.  The female lead especially is dull, having her only character trait be her obsession with details.  Really?  That's all you've got.  On the flip-side, the villain's acting is so over-the-top that you would think that he had a different script!  Some of the effects are actually pretty good, although CG fire has been pretty easy to do since 2002. The film doesn't have a lot to offer that you can't see in any Syfy Channel picture.  That's pretty much what this is- take it or leave it. 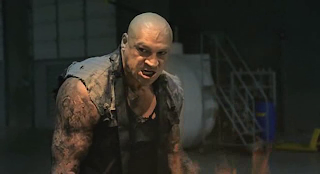 Up next, we get into a week of Must-Sees which will include movies that I've put off for a while.  First up, a Jean Rollin movie- this could go either way.  Stay tuned...