Anthologicious: Tales from the Darkside- The Movie

How must it feel to only be known as a film that was supposed to be a different one?  After two Creepshow films, Savini, Romero and King really wanted to make a third film.  Unfortunately, fate had aligned against them and it was not to be.  As we know, some jack-ass company would make a third Creepshow film- which sucked big time!  Thanks to some finagling, the third film could be made...but not under the old name.  The film was a collection of tales planned for the third film, but lumped together under the auspices of being a film version of the show Tales from the Darkside.  As a side-note, why do they always put 'The Movie' into the titles of these things?  News Flash: if I'm seeing it in theaters, it's a damn movie!  Anyways, this film features three stand-alone stories wrapped up in a framing device.  It makes for one nice, simple package of terror.  Will it live up to the standard set by Creepshow (and, to a lesser extent, Creepshow 2)?  Get out your ancient Greek porn scroll for my review of... 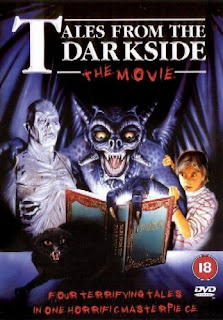 Before the actual stories begin, we get our wrap-around story.  A woman (Blondie's Deborah Harry) is a witch who has kept a kid in her prison/kitchen to eat.  She prepares to, um, prepare him when he distracts her with a tale from her favorite book- Tales from the Darkside.  It is called 'Lot 249'... 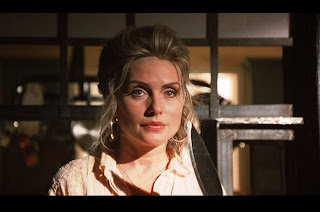 The tale revolves around a nerdy guy (a pre-Fargo Steve Buscemi), his roommate (a pre-Hollow Man 2 Christian Slater) and that guy's friend (nobody all that famous).  The nerd lost some sort of scholarship to the last guy, thanks to the ministrations of Slater's sister (a pre-everything Julianne Moore).  He gets Lot 249, which is a mummy that he can control.  He uses it to kill both of his enemies, but doesn't count on Slater figuring it all out.  Slater ties him up and forces him to give up the scroll that controls the Mummy.  As for the Mummy, it gets taken down by an electric carving knife.  Oh, how I wish that they had used it on the thing from Ancient Evil!  Buscemi leaves, but we learn that he switched the Mummy's scroll with that of a porn-tale written for Alexander the Great.  In the end, Moore and the friend show up as Mummies themselves (thanks to their treatments before death) and kill Slater. 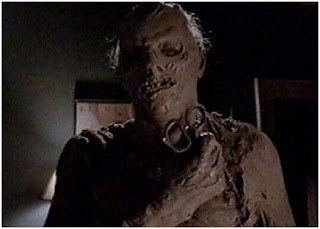 The kid buys more time by telling the tale 'The Cat From Hell.'  This involves an old man (Puppetmaster's William Hickey) hiring a Mafia hitman (Mr. Nanny's David Johansen) to kill...his cat.  As he explains, it killed his sister, her friend and his butler, although there's no evidence on his side.  It's all because the man's company made a toxin that was tested on cats before being given to humans.  The hitman is dubious about this, but the $50,000 changes his mind.  While the old man is away, the cat proves to be a thorn in the man's side. It constantly attacks him and runs away, forcing him to go through his arsenal of weaponry.  At one point, he actually shoots at it, but the bullet misses.  Don't ask me- they wrote it!  It eventually kills him at midnight (as it always does) and freaks out the old man when he returns.  The damaged clock rings midnight again as the cat kills the old man and leaves. 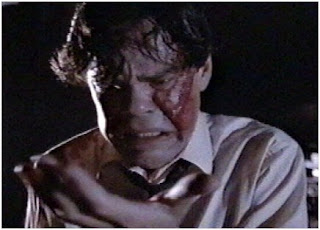 Time is running out for our hero, so he gets desperate and tells a love story called 'Lover's Vow.'  It tells the tale of an artist (James Remar), who is fired by his agent (Robert Klein) and decides to get drunk.  As he is exited out by the bartender, a demonic-looking creature kills the man with him and threatens our hero.  He makes a vow not to speak about what he saw, so the thing leaves.  As he turns the corner, he runs into a woman (Rae Dawn Chong) and romance ensues.  After a bit of a time-jump, we learn that the woman has helped him reach success and given him two kids.  For no clear reason, he feels the need to tell the story of the monster attacking him.  This triggers the woman to transform into the monster, revealing that she loved him, but he broke the vow.  She kills him and the story ends. 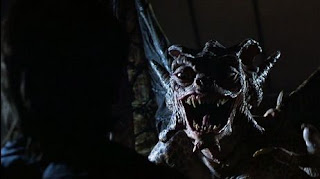 After the story, the kid reveals that he has one story with a happy ending.  It's his own, as he manages to escape, knock the woman into her instruments of torture and shove her in the oven.  He even breaks the Fourth Wall the film ends.  Thanks for that, Joey Lawrence's brother. 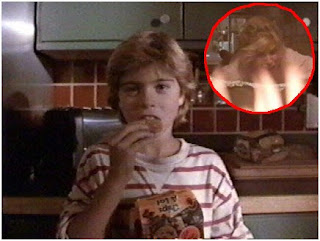 This movie is actually pretty good.  The framing device is interesting enough, although it could have played a bit more for laughs.  I mean, it's such a campy premise, but it's played straight until the end.  As for the three tales, they're good, but a bit uneven.  'Lot 249' has a strong beginning and middle, but falters a bit at the end.  They salvage it a bit with the finale, but it's not quite enough.  'The Cat From Hell' has an interesting premise, but has to be a bit forced to work convincingly.  They only really give the cat powers in the end, so it makes the hitman look pretty incompetent as a whole.  I get what they were going for, but they don't quite pull it off.  'Lover's Vow' is just odd.  The monster is great, then the story meanders for a bit before wrapping up.  It's not terrible, but it's a very uneven thing.  The actual film itself wraps up neatly enough and finally nails the right tone.  If you like horror anthologies, check this one out.  It just celebrated it's 20th Anniversary this year, so give it a try.  Hell, check out the show too. 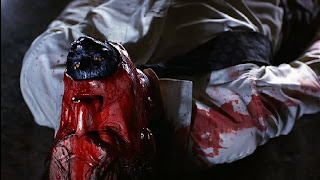 Up next, I celebrate Labor Day with a look at a town full of hard-working laborers that run into some trouble.  Of course, by trouble, I mean alien spider robots.  Stay tuned...
Posted by Alec Pridgen at 12:50 PM