VHS For My Loss: Truth or Dare?

What makes a film a cult classic?  Is it the fact that it's rare and hard to find?  Is it the age of the film?  Or is it just the fact that nobody saw it?  There's a great excerpt from Bruce Campbell's book that talks about how 'A hit film is seen by 1 million people 1,000 times, while a cult film is seen by 1 thousand people 1,000,000 times.'  Why do I bring this up?  Because today's review is of a film from 1986 that is considered to be a cult classic by many.  The film had a widespread VHS release in its day, but it took a while for it to be released properly on DVD.  In fact, there are two sequels- the first is not on DVD (at least through Netflix) and the other is.  So what is this film Truth or Dare?: A Critical Madness about?  Basically, a guy goes crazy when something traumatic to him and he becomes a crazed, serial killer.  That's pretty much it.  Believe me, there's more to talk about, but that's the gist of it.  This film was made by a young Tim Ritter, who has gone on to be involved in numerous other Direct-to-VHS/Direct-to-DVD releases over the years.  Basically, he's a one-man Polonia Brothers- not to be confused with how they are post-2005.  I'd say that the joke was in bad taste, but, considering those guys made Feeders 2, I'd say that neither one of them can judge me when it comes to that!  So yeah, does this movie live up to its reputation?  We'll see.  Get out your random mace for my review of... 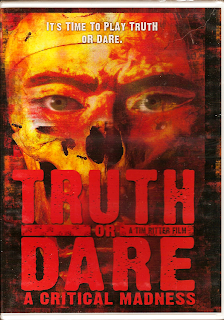 The beginning of this film is a serious drag, as it takes its sweet time getting going.  Remember the beginning of Road Games?  That's nothing.  Hell, the beginning of Munich is more speedy!  Basically, a guy takes about five minutes- post credits- to drive home and find his wife having an affair.  He leaves, driving off to the woods and hearing the words spoken earlier over and over again.  Yes, repeat the bad dialog six or seven more times, movie!  The guy gets even weirder, apparently talking to a woman that sort of appears in the woods.  He plays 'truth or dare' with her, but it just consists of him maiming himself.  Thankfully for him, a cop arrives and sends for medical assistance.  What's the treatment for wasting my damn time?!? 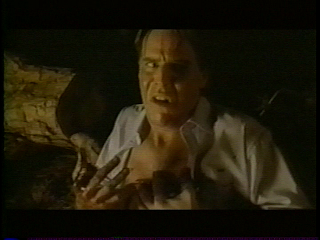 Basically, the film devolves into a loosely-connected murders.  We get some filler too, but the 'highlights' include...
* The guy feeds a fellow mental patient a grenade.  Where did he get it?  I dunno.
* He kills the wife's lover, despite him not being near him.
* He kills one of the asylum patients with a pencil.  It's that easy!
* He kills a random kid by driving by him with a chainsaw...which mildly-wounds him.  That's sad.
* He kills a woman who yells at him for hitting her garbage cans, despite him loading up an arsenal in front of her!  She dies via mace (why not?) to the face.
* In the end, he gets tricked by a guard from the asylum and shot, only to have killed the woman in the closet...and then him.  He dies.  The End. 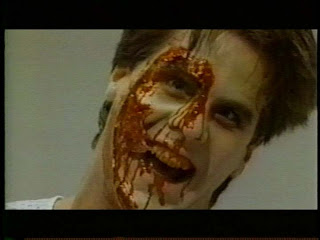 This movie sucks!  I get it- it was made for very little money.  There are many good films that were shot for a tiny budget...and this isn't one of them.  Had it been straight-forward, I could deal with it.  Instead, it's full of more padding than a training bra!  What's the point of most of this?  The only reason he maims himself is to have him wear that strange mask for the rest of the movie.  He kills people- big whoop.  Only the most shitty of shitty horror films- i.e. The Gardener- fail to not have that.  This film has nothing that you haven't seen before, but it was done better in those films.  What a waste of freaking time this movie was!  I don't care how 'obscure' it is, it still sucks.  Speaking of padding... 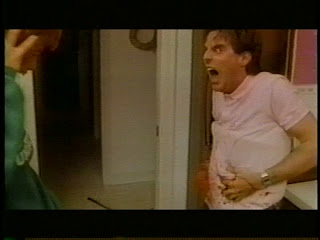 Next up, I take a long look at four of the most pretentious films ever made.  First up, a film about a man named Billy Jack who doesn't care for bikers.  Stay tuned...