Lost and Found: A Page of Madness The Story
Japanese expressionist cinema was very popular in this time.  The film in question tells the tale of a janitor at an asylum (ironic considering past updates of this segment) who meets up with his family.  The tale is told out of natural order and with some bizarre imagery to boot.  Unfortunately, this silent film was lost.  Would it ever return to tell its tale to us again?

Was It Found?
Yes.  The film had disappeared about twenty years after it was made, around the time that a certain war involving Japan was going on.  After another couple decades, it was discovered by the director himself.  You see, he was out working on his garden when he discovered a film can in the ground.  Of course, he remembered, he had buried it there to escape damage and/or occupation!  Yeah, he had just forgotten about that part.

Significance
While the film is still not really complete- as it would have been accompanied by narration and music at showings- it's a notable piece of Japanese cinematic history.  It's avant garde and, well, strange.  I could also point out that it was written by Yasunari Kawabata, a poet who won the Nobel Prize for Literature in 1968.  By th way, he was the first Japanese man to ever do so. 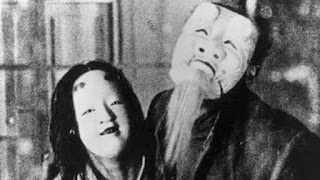 Up next, a pair of silent comedies go missing.  So, how did they end up together...in Sweden?  Stay tuned...
A Page of Madness: Cinema and Modernity in 1920s Japan (Michigan Monograph Series in Japanese Studies)

Email ThisBlogThis!Share to TwitterShare to FacebookShare to Pinterest
Labels: Japan, lost and found