After all this time, this is only the second Boris Karloff movie I've talked about.  How did that happen, I wonder?  Regardless, I'm here with his last attempt at getting a paycheck thanks to Mary Shelley's work.  Obviously, Karloff is famous for playing Adam, so it only made sense to cast an older, crazier Karloff as the doctor himself.  Made in 1958, the film was originally going to be called Frankenstein 1960, but that didn't sound futuristic enough.  Fun fact: Karloff himself died in 1969.  Okay, that may not be as fun as I thought.  Anyhow, this film is another in a line of low-budget horror films shot on a sound stage in about a week.  Seriously, they made this in 8 days!  The movie gets points for playing with genre conventions early on, but loses them for falling into the same cliches later.  You can't have it both ways!  Can Karloff turn this nearly-forgotten film into gold like Frankenstein vs. The Space Monster or will it be on par with Frankenstein's Daughter?  Get out your personal atomic reactor for my review of... 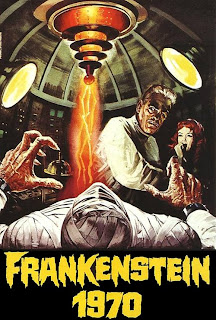 The film begins with a long, black & white credit sequence that leads into a woman being chased slowly by a monster.  She runs into the lake for no good reason and it begins to choke her when...a director calls cut?  Yes, this one of those movies where people make movies.  Thanks for making it all confusing, guys!  After that, we get to meet Karloff as the last descendant of the Frankenstein line.  Considering how many sons, nephews, grand-daughters or cousins their have been, that's saying something!  For some reason, the movie production company is looking for a good, real location to shoot in.  The guy running the estate for Karloff gives them the right to shoot there, which Karloff is not fond of.  The irony, of course, is that this 'real' location is a sound stage itself!  A keen eye may also notice that this movie is often shot like a play, choosing to go with a wide-angle shot and show people entering and exiting.  The cast and crew of the film is oddly-small & only includes a Director, a Writer (his ex-wife), a Producer, a starlet, a Director of Photography and a giant who plays the monster.  I think porn movies have bigger crews than this! 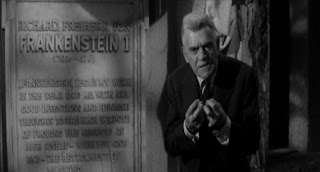 As an 'actor,' Karloff's character does quite well.  How much is acting though?  As it turns out, he is doing some illicit experiments there and they grow dangerous.  He hypnotizes one of his helpers into giving up all of his organs, save for his eyes.  He makes an excuse for the man's absence, but it doesn't fly with his estate owner.  The man stops asking questions, however, allowing Karloff to create his monster, just without it's eyes.  That night, the Writer and the Producer have a fight, since the latter wants the former to get over her love for the Director (who actually lusts after the starlet).  Just like the pregnancy sub-plot in Hello Mary Lou: Prom Night 2, it goes nowhere when they kill the woman at the center of it.  Apparently, she dies from a heart attack, since the monster never touches her and Karloff just says that she died.  He makes an equally-implausible excuse for her absence, but, again, nobody really raises much of a fuss.  A lot of this middle-portion is eaten up by long sequences of Karloff in his lab.  I guess he doesn't have the same fear of these electrodes that Bela Lugosi had in Ed Wood.  In a move right of the Big Book of Sci-Fi Cliches, the scenes are narrated by Karloff apparently leaving himself notes.  Yes, explain to yourself what you are doing!

While scouting a shot for later, the Director of Photography is killed by the new monster.  This only works because his self-defense method is to just stand there and get killed off-screen.  If you want on-screen death, you should know better than to watch a film from 1958.  To make matters worse, his blood type is not a match, so his death is completely-pointless.  The police finally get called, but don't find anything.  They nearly spot a secret entrance to the lab, but Karloff closes it just in time.  Finally, his friend wants a full answer to everything, so Karloff takes him to the entrance and kills him with the monster.  The Director and Producer do their own investigation & find the D.P.'s lens on the floor.  This is enough evidence to call in the police, apparently, since they show up in the next scene.  They confront the monster in the lab, but it gets exposed to too much radiation and dies.  Karloff himself dies too, although I'm not sure why.  We learn the secret of why the monster was in a giant helmet the whole time too.  His face is...Karloff's face, just without the fake scars.  Damn you, Shamylan!  The End. 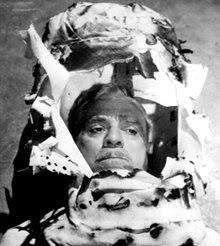 This movie is good, but doesn't do much to distinguish itself.  The whole idea of the plot- a movie being filmed in a house that contains a real experiment- is good, but they don't commit enough to it.  The first half of the movie makes use of it, but it quickly gets abandoned.  It's a shame, since this could have turned out as good as something like Shadow of the Vampire.  As a whole, the acting is not that good.  So many of the people are very stilted or just cliched.  Karloff is, well, Karloff.  Translation: he's great.  His narration in the 'film-within-a-film' bit reminds me a bit of his role that would come ten years later in Targets.  If you know the scene in question, you will know how much of a compliment that is!  I wish I could recommend this film more than I can.  Unfortunately, only genre fans or die-hard Karloff fans will really like this.  It's too stock to break out of the mold of these kinds of films.  If you qualify, give it a look.

Next up, let's keep up the combination of classic horror character and year with a Hammer film.  At least this one was listed as the right year!  Stay tuned....
Posted by Alec Pridgen at 3:07 PM