Ah, Jean Rollin.  I like one of your movies, but everything else I've seen has been pretty bad.  Seriously, I'm a big fan of The Grapes of Death- a film that I think is wrongly-overlooked by most fans of the zombie/infected genre.  However, his other French zombie film- of the normal variety- is Zombie Lake.  Yeah, I can't think about that film without remembering the pool full of zombies that's bright blue, while the lake is all green.  On top of that, he made a film called Night of the Hunter, a film that I couldn't stay awake through on my first viewing.  It's so bad that I have yet to dare rent it again!  So that brings me to Living Dead Girl, a film most people will know as the one whose title inspired a Rob Zombie film.  It makes you wonder if there is an obscure Swedish vampire film called Dragula, doesn't it?  Will this film even out my opinion about Rollin's work or will it scare me away from films like The Nude Vampire and Killing Car?  Get out your toxic waste barrels for my review of... 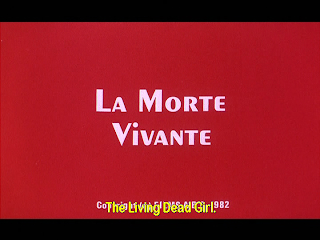 The film begins with a really scintillating opening sequence involving a busty vampire woman biting another busty woman on the neck.  We get a very slow, lingering shot of the woman's bloody body before we get to the face.  After that, the movie begins.  Does it relate at all?  Nope.  We are then treated to some sleazy men dumping barrels of toxic waste in the basement of a building.  News Flash: don't dump toxic waste in a room full of corpses.  As if they weren't bad enough, they begin to rob the corpses- which are perfectly-preserved- of their valuables.  A minor earthquake occurs causing one of the barrels to tip over and spills in the direction of the corpses, causing a toxic vapor to seep out.  As one of the men is robbing the oddly-fresh body of a woman who died two years ago, it comes to life and stabs him in the eye with his nails.  For some reason, his face turns bleach white when this happens.  His comrade had fallen over in the mini-quake and gets the waste running by his face, leading to another gore shot.  The woman rises up, drinks the blood of both men and finds time to finish off their friend before wandering off.  Wow!  After all of that, I'm expecting a great tale of blood, gore and intrigue.  I'm sure that I won't be disappointed by the time I write the next paragraph... 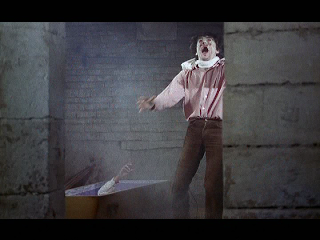 Damn- I set myself up for that one!  The film feels the need to delve into the strange back-story of this re-animated women- at the expense of everything else though.  Basically, she made a vow with a childhood friend that they would always be together.  Yeah, the blond one died...from something that the movie explains.  If I had to guess, she drank a whole bottle of embalming fluid!  This brings the entire story to a halt, a flack not helped by the supporting cast.  You see, our heroine is a redheaded woman who is in France with her boyfriend....for some reason.  This leads to a funny bit of dialog between the two.  The man tells her to "knock it off," prompting her to walk off.  He goes to stop her, which is when she asks what he meant by "knock it off."  His response: "It means I love you."  Yeah- right!  Anyhow, she takes a picture of the woman in a field and becomes obsessed with finding her, since the plot said so.  Seriously, she has no motivation other than her being the most nosy person alive!  Eventually, the dead woman gets back to her old home and kills a couple that has decided to use it as a love nest.  At least the ridiculous blood spray used on the actress is kind of funny. 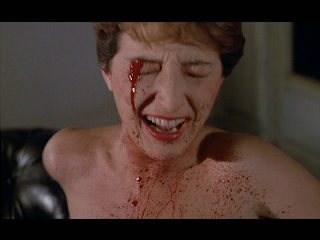 As the plot moves towards it's wrap-up, things don't get a lot better.  Our heroine eventually finds the house, talks to the titular character for a bit, but leaves when the friend returns.  Speaking of which, she tries to make her friend happy with a dead bird, but that won't do.  Instead, she tricks a woman into coming home so that she can be killed.  A good scene- even if it could have been done in three minutes and not ten!  The title villain feels bad about her uncontrollable habit, however, and begs to be killed.  The woman refuses, choosing to ignore the issue instead of doing anything about it.  It all ends up in the town square for a festival, padded out with a song and some dancing.  The woman sets up another victim for the living dead friend, but it doesn't end the way that she planned.  When the boyfriend gets involved, he gets an axe in the forehead.  That's what you get for...being a useless, ancillary character!  Eventually, the duo end up back at the home, but the living dead girl kills her friend and drinks her blood.  As her anguish sets in, this movie mercifully ends. 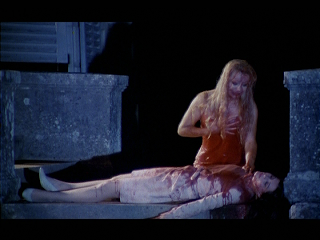 This movie is not good.  I get the idea of a lot of what they were going for, but it just failed to interest me.  They had something good here, but filled the movie to the brim with boring filler.  Why did we need so much back-story on the other characters?  Why couldn't they have simplified the concept of why our heroine is looking for the woman?  I mean, she just takes the picture of a woman and has to track her down?  What kind of strange logic is that?  I just can't believe that they messed this up!  A woman is brought back to life by toxic waste...so they waste the film on a boring story about two friends that made a childhood pact.  Geez, this thing writes itself!  Woman comes to life, starts killing people and more people come to her.  They clearly had something here...but failed to make a finished product.  I wish that I could have just had that weird, unrelated footage from the beginning instead!  Say what you will, but that movie grabbed me in the two minutes it ran.  Let's just end with some of that, shall we? 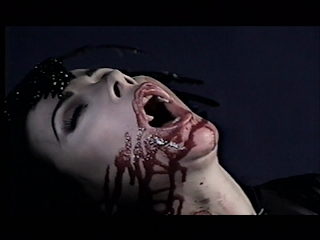 Next up, a film that everyone has been telling me that I would like.  Will this film about Satan and the Passion Play be worth my time?  Stay tuned...