No technical issues can keep from posting this review for you lovely people out there!  Long ago, I heard the tale of a film about fetus-eating vampires.  I was like 'that can't be real.'  I was wrong.  Way back in 1993, someone took a fairly obscure legend of the Aswang and made a film about it.  The reason I learned about this was due to a lovely company called Mondo Macabro.  I owe them for seeing a lot of films, including Tarkan vs. the Vikings, The Devil's Sword and The Queen of Black Magic- just to name a small portion.  Interestingly enough, despite being about a legendary monster from the Phillipines, this film was made stateside.  It tells the tale of a young woman who makes a business deal and learns to regret it.  So, can this movie live up to my own personal level of hype or will it just suck (in the bad way)?  Get out your axe-hammers for my review of... 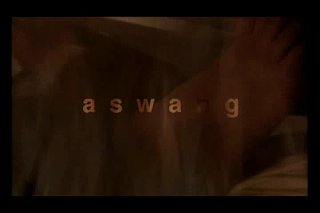 After a credit scene that looks like it belongs in the finger puppet version of Dante's Inferno (great movie- check it out!), we get to see our heroine.  She is a young Juno-like girl who got knocked up and decides to make things right.  Nah, she decides to sell her baby to a young, infertile couple when it's born instead.  Incidentally, if this intro was not filmed in Canada, then God can strike me dead!  After she makes the deal, we jump to...seven months later.  Okay, that's a little odd.  She is driving in a car with the husband she's selling to the kid to.  Why?  You see, the guy has to have an heir to inherit the family fortune, so he brings the girl to pass off as his wife Janine.  I love happy marriages, don't you?  They drive around for a bit, making me worry that this is going to turn into Manos: The Hands of Fate.  Just to really freak me out, they get pulled over by a cop- only to have him realize who the guy is and let the couple go.  Unlike Manos, there is actually a point to this!  They arrive at the house and learn that things are not going well.  The mother is sick and kind of crazy, as evidenced by the scene in which she talks to a chicken.  The nurse is a nice Filipino woman who appears a little off herself.  Meanwhile, a man is wandering around a nearby field and finds a baby's skeleton.  Oh joy.  They run into the man later, with the 'husband' berating the man for being on their land.  The girl invites him for dinner, however, and it gets a little awkward.  He returns to his shack and is killed by a monster.  Thanks for coming! 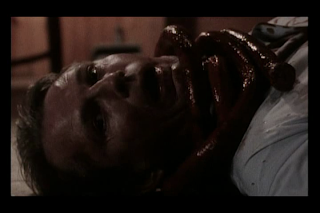 Life at the house is a little odd.  The mother wanders around, alternating between being sick and being confused.  The 'husband,' meanwhile, appears to have a crazy side- even if he is subtle about showing it.  The family is definitely keeping a secret from our heroine, which may be related to a nearby cabin on the estate.  One night, the mother crawls across the walls and to the outside of our heroine's window.  She sends out a weird proboscis from her mouth, which goes through the window and up the girl's nightgown.  Thankfully, she wakes up and pulls the thing away from her 'lady parts.'  She tugs on the thing, causing the mother to lose her grip and fall to the ground, held up by the proboscis alone- that's gotta hurt!  The son hears the scream and runs outside, finding her in pain.  Naturally, he cuts the thing out of her mouth.  In the wake of this fright, our heroine flees to the cabin, seeking answers for all of this.  As it turns out, the man from earlier is in there, wrapped up in some sort of webbing.  Not only that, but the 'wife' from earlier is there and packing a chainsaw!  She nearly offs the poor girl before she manages to kill her with a garden hoe!  The husband comes in and drugs her, but she manages to run away.  She ends up with the cop from earlier, who thinks that she is just lost and returns her.  See- I told you it had a point! 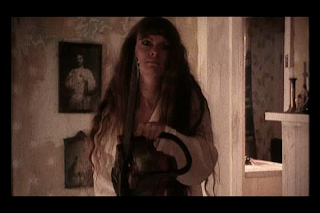 As he's driving back, the cop begins to feel suspicious about the whole situation and calls in for information on the girl.  It's nice of you to care after you drop her off there!  He goes back to the house and is almost immediately killed- wow, that was pointless, huh?  The girl wakes up in the cottage again, chained to the wall.  She slowly but surely tries to reach for an axe-hammer to cut the chain.  The family returns and tries to get the mother to feed on the girl.  However, she dies, leaving the job up to the son.  He tries to kill the girl, explaining that he only needs the thing inside her- not her.  In desperation, the girl grabs the axe-hammer and cuts her hand off with one swing.  You need more calcium, honey!  She tries to escape, leading through a chase in the house.  She ends up in the grass outside with the man on top of her.  The maid shows up with an axe and he orders her to kill the girl.  When a proboscis emerges from the girl's womb, however, she swings the axe down at the man!  We jump to five years later and see the now-older girl being raised by the maid.  Her eyes turn white like Storm, revealing that she is an Aswang.  In a final scene, we pan across the grave markers of the family, revealing at least four different 'Janines.' 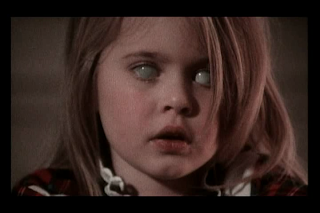 This movie is...really weird.  The plot is a mix of Juno and Nosferatu, but with fetus-eating thrown into the mix.  The mysterious Aswangs are an interesting creature to do a film about, albeit a freaky one.  To my knowledge, the only other film about them is Surviving Evil, a film made in 2008 with Billy Zane.  It has yet to be released on DVD in America, so have fun Region-Free DVD Player owners.  As for this film, it's definitely low-budget, but it does contain a certain atmosphere.  The whole thing is dark and dank, making you really relate to the girl's sense of fear.  The cast is very small, which makes you wonder why they were so quick to kill off characters like the investigator and the cop.  They may have been able to add more to your story, but whatever.  The acting is honestly quite good, although the characters only have a few key emotions to portray.  Given the small, claustrophobic scope of it all, this works just fine.  If you can find this film, it's worth giving it a look.  You may not like it as much as I do, but you have to appreciate the tale they managed to make with so little money.  It makes me curious to find out what else these people have done now. 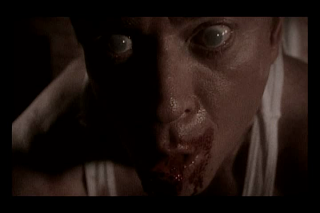 Next up, Blockbuster Trash brings us the prequel to the film Vacancy.  Given that nobody survived the previous attacks, what is the point of this film?  Stay tuned...