After the surprise success of Sleepaway Camp, a sequel was sure to follow.  Hell, the only '80s film of this type that didn't really get a sequel is Neon Maniacs, that poor bastard.  This film was made a mere five years after the first one, so the waters weren't exactly fresh.  On a positive note, the lead was wisely-recast, a lesson that Don Coscarelli should have learned sometime around 1988!  The film is notable for casting two people related to famous people as their leads: Pamela Springsteen and Renee Estevez.  Hmm, one of them is the sister of a singer and the other is a sister of the guy from Repo Man.  I could say that she's the daughter of Martin Sheen, but it's funnier to call her the niece of Joe Estevez, so I will!  Anyhow, the illusive Angela has somehow worked her way into being a counselor at a camp that is on the same grounds that her original murders took place.  Was Crystal Lake too much of a trip for you?  Oh and that's not spoiling any surprise for you, since her identity and motives are literally revealed before the film's title card!  Will this movie be a new cult classic like A Nightmare on Elm Street 2 or a big disappointment like Friday the 13th, Part 5?  Get out your bug spray for my review of... 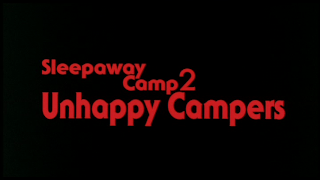 The film begins with a group of campers sitting around a fire and telling scary stories.  One of them tells the tale of Angela, the boy-girl who killed all of the people at the camp.  This is broken up by the youngest counselor in camp pulling the lead girl away from the group...and killing her.  You couldn't have waited until you were more than 10 feet away, huh?  So yeah, the young counselor is Angela, who was apparently given a sex-change operation while in the institution for the last few years.  This is the kind of out-of-control psychological institutions that Reagan rallied against!  Actually, this is a plot point that is never addressed fully, since it is mentioned in the camp story, but not confirmed or denied by Angela at any point.  Explain, movie!  We learn that the camp is full of 'bad eggs,' which is just a pretense for Angela to have trouble with all of the '80s slasher movie cliches.  When your movie is telegraphed within the first ten minutes, where is the fun exactly?  Oh and we meet our really obvious 'final girl' in the form of Estevez as the cute, innocent redhead.  Just for juxtaposition, we get a slutty blond who flashes the boys and wears wet t-shirts.  Thank you, movie- we all get it!  The first real victims are a pair of stoner girls who get burned alive by the fire.  Kudos for having the one girl sleep through both the sound and smell of her sister being charred to death a mere foot in front of her! 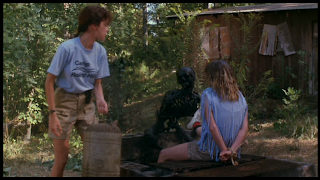 The film flows in a pretty linear manner, so let's see how interesting I can make this.  The teens do a bunch of 'naughty' things and proceed to get killed.  For example, the teen males have a panty raid of the girls' cabin, followed by the girls getting their retribution.  A pair of the guys dress up like Jason and Freddy Krueger in an attempt to scare Angela.  She counters this by dressing up like Leatherface and killing them with a chainsaw.  Fun fact or lazy writing: all of the campers appear to have a really bad sense of hearing.  The slutty girl actually escapes death when Angela's chainsaw runs out of gas before she can cut the door to the bathroom where she is having random sex open.  Wah wah lame!  Incidentally, how does Angela cover up the deaths of the teens at the camp?  She tells the camp leaders, including a great guy with a mullet, that she kicked them out for breaking the rules.  That's...extremely-lame, movie.  I would be remiss if I didn't address some of the film's more random scenes.  For example, Angela leads a cheerful sing-along early in the movie...for no reason.  Later on, she has a weird bit of regret via flashback to earlier scenes from this movie and Part 1.  Does it go anywhere?  No. 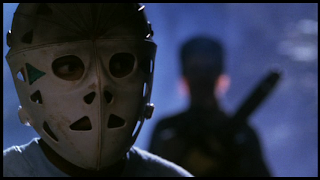 As things get worse, the movie gets even less subtle and even less clever.  The slutty girl finally gets killed by Angela after having sex with a random guy in the woods.  She is lead to an abandoned cabin, stabbed a couple of times and dumped in the latrine.  That's...awfully-sadistic and long-winded for a film that has had quick kills so far.  The movie's lone black girl gets killed when she talks about how none of the 'kicked out' teens have returned home.  She tells this to Angela, leading to her being garroted with a guitar string.  The lead up to this is supposed to be funny, but I don't care.  Angela's bosses finally kick her out for expelling so many youths without consulting them and she takes it well.  I'm just kidding- she kills them off-camera.  Our villain decides to capture 'final girl' and her boyfriend for some reason, only to kill the guy within a couple of minutes.  In one of the film's few clever moments, the mullet-sporting counselor shows up to save the day, only to have battery acid thrown in his face.  One throw-away line in the second scene had him mention his missing car battery and it sets up this.  Afterward, one of the remaining counselors fulfills one of the slasher cliches by wandering around and finding all of the people dead, including two perv kids from earlier.  Our heroine makes her escape...only to run into Angela after she kills a pointless cameo character.  The End. 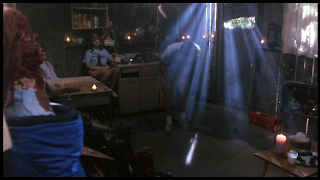 This movie is...really not that good.  It has some interesting moments, but it is still one of the most 'by the book' films you can see.  You want to know why people talked about the slasher genre losing all of its steam and polish as the 1980s came to a close?  If so, check out this movie, not to mention tomorrow's review.  Pamela's performance as Angela is actually pretty good, although her act as a nice person is never that believable.  She always looks like she's plotting to kill someone in the next five minutes...which she usually is.  Never mind that only a few years has gone by since her famous arrest, institution sentence and release/escape.  By the way, could you guys please pick an answer to any of your back-story questions please?  There's really not a lot of plot here, so you could have taken time to focus on it, couldn't you?  We don't watch these films for the plot, so how is the gore?  It's pretty average, although there are some inspired moments near the end.  The movie tries to over-compensate by setting up a room full of bodies and it really feels forced.  Thank God for Angela that nobody checks one of the eight buildings in the camp!  If you want to see how odd the slasher genre got, this is a must-see.  For everybody else, just watch something else. 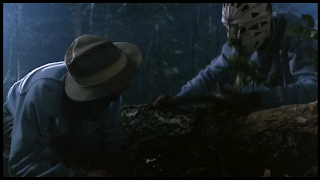 Next up, Angela returns for one last hurrah in a film with even more awkward comedy and gore.  I miss you, subtlety.  Stay tuned...
Posted by Alec Pridgen at 11:53 PM