Poland is a gold-mine for shitty posters and today is certainly no exception.  In the wake of their other Jaws poster, they had to up the ante for it's less-than-well-regarded sequel... 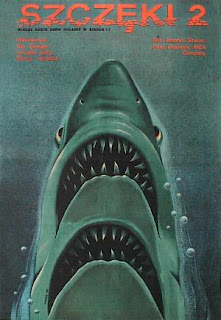 This is...this is...I don't know what to say!  You made a shark with two sets of jaws because the movie was called Jaws 2?  I swear I'm not making this one up, but even I can barely believe that this is real!  I want this as a wall poster, dammit!

Up next, a Stuart Gordon classic gets twisted in Japan's usual way.  You had to realize that I had more of these, didn't you?
Posted by Alec Pridgen at 10:58 AM