Marketing is a strange thing.  Companies go to one extreme or another just to get their product some attention.  Case in point: the makers of Avatar: The Last Airbender spent an estimated $150 million on the movie and $130 on the marketing!  Even if that includes the cost of making the video game, that seems a bit absurd.  That brings me to today's subject: Van Helsing- The London Assignment.  Released in 2004, this movie was made as a direct-to-video prequel to the film.  Remember Van Helsing?  It was a big-budget film designed to relaunch Universal's horror properties with the aid of Hugh Jackman's machismo and fame from the first two X-Men films.  The result: a film that barely met expectations, was a critical failure and did nothing to relaunch the properties.  Even the combined might of Wolverine and the director of The Mummy could do it, people!  What about this film though?  The theatrical film begins in media res (look it up) with the title character chasing and killing Doctor Jekyll/Mister Hyde.  Why?  How did he get there?  That was for this short film to answer.  This seems simple enough: hire an animation director, put Hugh in a studio and you've got money to burn.  Considering how obscure this is? 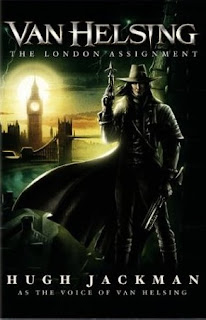 The film begins in jolly old England with a prostitute wandering around the back-alleys.  She is assaulted by a mysterious, gloved man who cuts her throat.  Why does this seem familiar to me?  To break familiarity, he uncovers her mouth after this and a weird bit of energy floats out, which he subsequently collects in a beaker.  Man, Criminal Minds is stretching logic more than usual!  We cut to Rome where our animated Van Helsing is wandering through the streets.  He's suddenly attacked by vampiric figures, which explode into fire when he shoots them with a crossbow.  Easy there, Fred Williamson!  As it turns out, this is actually a training exercise the Vatican runs for him.  Oh, so they exploded because....why again?  He meets up with his side-kick/comic-relief/gadget-guy, who leads him to a briefing room.  They show him via microfiche (which, apparently did exist in 1887) that 'Murder Strikes Again.'  Apparently, they invented the English language, but not Grammar Check!  He is sent over to London with his multi-faceted companion, who promises to show him some new toys.  By the way, almost none of it shows up in the real movie. 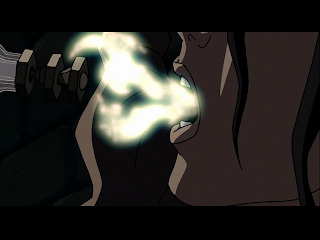 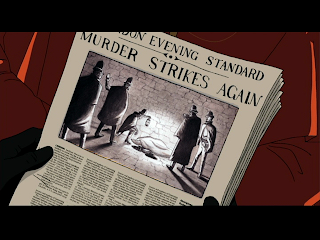 The pair show up and do the only natural thing: dress up the priest as a prostitute in order to lure out the killer.  It works, but the creature turns out to be quite tough.  It knocks the two around until Van Helsing fights back, prompting it to run away.  He chases it into the subway and they fight on a train.  Before the fight, he actually spots a non-transformed Jekyll, only to get tricked and punched- dumb-ass. Our hero hits a button, causing a clawed-glove to form on his hand.  Um, we can't do that with the technology we have now!  This allows Van to climb across the train, as opposed to just tearing his arm out of its socket and killing him.  They fight some more before our hero is knocked away, prompting him to cause the last, empty car to crash and explode.  By the way, obvious CG used in place of animation, guys!  This apparently does not kill Dr. Jekyll, who digs a tunnel through the bricks and escapes.  They follow him thanks to a Super-Soaker full of holy water, which burns when it touches any bricks that Hyde touched.  No, really.  This leads them to an underground cave...in London.  Huh? 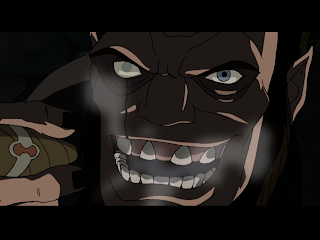 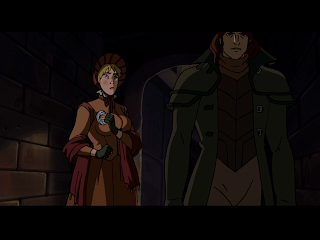 If you thought that this movie was silly before, just wait!  The pair wander towards the center of the...cave, only to find a horde of Knights Templar-style skeletons on the attack.  Um, why?  How?  Anyways, the assistant drops his 'Super-Soaker' on the ground, causing a giant explosion of holy fire.  No, really.  They get to the top of the place and discover the truth.  Jekyll, you see, is Queen Victoria's royal physician and has been killing people, stealing their souls and putting them in a potion that he gives to her.  Why?  To turn her young again so that they can be together.  In true horror movie fashion, a scuffle ensues and the place is set on fire.  He escapes through a tunnel which leads to the royal estate, but he's followed by our heroes.  Van Helsing quickly dispatches Hyde's unexplained, demon henchman (seriously, what the hell?!?) and wrestles with him on the royal balloon.  During the fight, 'Victoria' sees his true inhumanity and turns against him.  The thing crashes, leading to a different fight.  Geez, is this a movie finale or a Super Smash Bros stage?  Hyde ends up saving 'Victoria' and escaping, which leads to Van Helsing chasing his train...on a horse and The End. 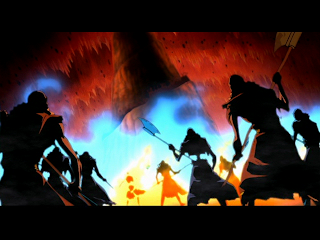 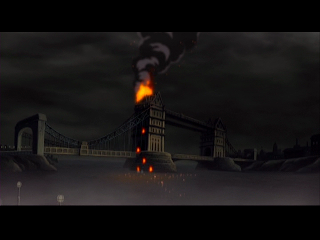 This semi-movie sucks!  I get the idea of most of it, but it's still bad.  The plot is silly, doesn't really explain anything and ends in the middle.  I'm sorry, but aren't movies supposed to have endings.  The whole premise is that you're seeing the beginning of the tale- I get it.  The problem is that you get no real pay-off, despite what the movie wants you to think.  Sure, they save Victoria, but the bad guy could literally just come back and get her- which they know!  It would be one thing if they had the thing crushed under the rock and Helsing leaves, only to show us that he survived.  All you do is write one line saying something like 'I thought you were dead before' or 'I'm going to make sure that you stay dead this time.'  It's a sad day when my five-minutes of thought tops the writing work put behind a film that was made for over $100 million!  As a stand-alone film, this is alright, but not great.  If you like bare-bones animation, pretty obvious insertion of CG and Hugh Jackman phoning in a performance slightly more animated than Tobey McGuire in the Spider-Man 2 game, this is for you!  It's not really scary, exciting or interesting.  It takes a really ridiculous film idea (Van Helsing), makes the plot even sillier (Jack the Ripper as Mr. Hyde stealing souls to restore a Queen's youth) and doesn't deliver on anything solid.  Some things should stay obscure, I guess. 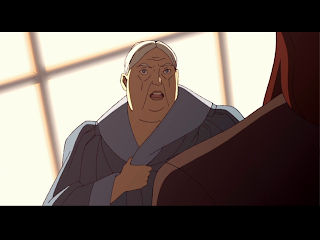 Up next, I check out the follow-up to Yo-Yo Girl Cop.  Will it be a surprising bit of melodrama or something much, much stupider?  Stay tuned...
Posted by Alec Pridgen at 11:23 PM