Stuart Gordon is a name that is not always associated with Full Moon Entertainment.  Between the Band father/son duo and Ted Nicolau, the bill is pretty well filled.  As Arcade has taught us, other directors have done intermittent projects for them over the years too.  Gordon is one of them, although his output for them is pretty minimal.  After Castle Freak, my expectations are set at a certain level.  How does his earlier work fare then?  The tale is a very vague version of 'The Pit and the Pendulum.'  He basically just uses the title to tell a tale of the Spanish Inquisition.  There are certainly worse things that you can do with Poe tales, as the work of David DeCoteau is a testament of.  Oh and this stars Lance Henriksen- joy.  Get out your hot pokers for my review of... 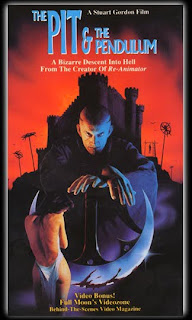 The film begins with a man's body being exhumed and, subsequently, whipped.  Um, that's a skeleton, dude!  They put the...bones through their paces and mention that all of his family's money goes to the Catholic Church, since he was convicted of being a heretic.  Hey, you can't afford your own country on a mere 10% tithing!  After the credits, we are introduced to a horny couple, who turn out to be our main characters.  The man stops their make-out session to finish baking bread- not a euphemism...this time.  They go to an outdoors festival and are making real money off of their baked goods.  However, some urchins steal a couple loaves, causing our main lead to chase after them.  In the ensuing mayhem, the crowd rushes towards the main square, separating our heroes.  When they get there, they reunite.  Thanks for the false drama, jerk!  The festival turns out to be the public execution of a heretic.  Man, those Arizona guys take illegal immigration seriously!  This is actually Spain during the titular Inquisition, which is led by the book-keeper (Jeffrey Combs) and the Inquisitor (Lance Henriksen).  The man begs and pleads to be killed before his body is burned, leading one of the men to choke him Hitman-style.  When the kid tries to stop this, the men hold the boy and begin to whip him.  Since our heroes are not allowed to leave, the woman rushes in to stop the whipping.  This ends with the man being pommeled and the woman declared a witch.  Oops. 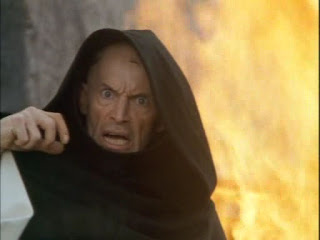 Unfortunately, things don't get any better.  The man wakes up and is told that his wife was captured and taken for torturing.  In the dungeon, she is forced to disrobe and gets fondled by the torturers.  Thank you for the pointless nudity and molestation, movie!  All of this is done because the Inquisitor has the hots for her and can't face his feelings.  Why can't the Spanish just go ahead and invent a shrink?!?  She is thrown in a cell with an actual witch- actually a woman who just knows medicine- and is taken on a weird head-trip.  That served no purpose- thanks.  The next day, she sees the woman be tortured, in spite of her confession.  They can't accept a confession when it's not made during a torture session, apparently.  I love this logic, don't you?  Without consulting the Inquisitor, the men put our heroine on the rack for a couple of minutes.  The man puts a stop to this and pines for her some more.  Meanwhile, our hero bribes a guard to let him in, only to get betrayed by the same man.  He gets him back later during an escape attempt by throwing hot oil in his face.  He manages to free his lady and nearly escape, thanks to holding the Inquisitor hostage.  The man promises to let our heroes go if they pull the knife away and they actually believe him.  Yeah, it was a trap.  A plot point involving the Pope's envoy (Oliver Reed) comes up, only to have the man killed after a few minutes.  Naturally, Reed gets top billing in some posters. 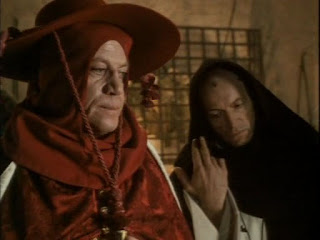 Things still don't get better for our heroes!  The Inquisitor holds his authority over the woman to get her to agree to all sorts of things.  He fondles her for a bit, before freaking out, hitting her in the head and cutting her tongue out!  She gets dumped in her cell and dies, which apparently upsets the Inquisitor.  If that's the case, don't cut peoples' tongues out!  They bury her, which upsets our hero quite a bit.  The death, not the burying- obviously.  Incidentally, the witch is blamed for her death and burned alive, but not without her swallowing some gun-powder and exploding!  Finally living up to the title, the Inquisitor straps the man down to his new torture/death device- the Pendulum!  Incidentally, they barely set this up at all, making it feel extremely shoe-horned in.  The man manages to escape the trap by getting rats to bite his ropes...but he falls into the pendulum's attached pit.  Now it all makes sense.  He gets back in before the gate closes on him, setting up an angry Inquisitor.  A former victim/accomplice turns on Henriksen, only to have him die in a minute.  That was pointless.  Finally, Henriksen is confronted by the recently-revived and telepathic woman (don't ask) and the skeleton from before, leading to him falling into the titular Pit and dying.  Since he announced the girl's innocence at her funeral, the couple is allowed to leave.  The End. 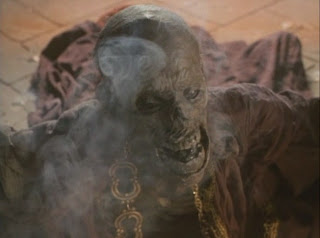 This movie is...very bleak and weird.  The tone is incredibly-depressing, which is amplified by the realistic and dank setting.  Full Moon has a thing about shooting in castles, don't they?  The story is very sad, but it's not really surprising when you consider the setting.  Is it possible for anyone but Mel Brooks to make The Inquisition funny?  The acting is pretty good, with Henriksen nailing his freaky character quite well.  Combs and the other torturers portray the right mix of apathy, sociopath-tendencies and humor to make it work.  Seriously though, those glasses are just goofy.  The rest of the acting is...pretty forgettable.  Our heroes don't do much more than cry, yell or moan.  They're a real blank slate, but that might be intentional.  If they're meant to be related to, it does kind of work.  Other than that, anyone could have played the part.  Plus, what was the point of Oliver Reed being in this?  There was none, you say?  Okay.  As a whole, it's sad, depressing and quite weird.  Apparently Gordon can't make fun movies when he works with Full Moon.  Is he just trying to set the curve in the opposite direction of stuff like Evil Bong, perhaps?   Either way, it's not for everyone.  If you like period-piece horror or Gordon's Gothic stuff, you're in for a treat.  For everyone else, it'll just depress the hell out of you! 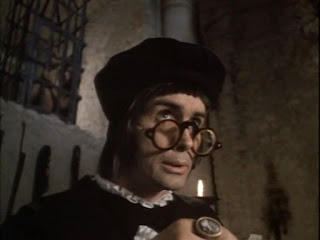 Next up, Blockbuster Trash brings us another direct-to-video sequel.  This one involves ghosts, murder and that guy from Firefly.  Stay tuned...
Posted by Alec Pridgen at 11:58 PM