The 1980s have given a great many horror films, as well as many genre-bending films.  What happens when those two collide in a big, awkward mess?  The answer is simple: The Dark Power.  Horror-comedies work when you find a good mix of laughs and scares, either by presenting silly situations or by parodying the conventions inherent in the genre.  This either works or fails miserably.  Given the kind of films I talk about here, guess which happens here- I dare you!  The film was directed by Phil Smoot, the man responsible for a grand total of two films: this film and Alien Outlaw.  I shouldn't be too harsh on the guy, since he has worked on some big films.  For example, he worked on 1994's The Jungle Book...as a Budget Manager.  He also worked on both Children of the Corn II and Hellraiser III...as a Unit Production Manager.  So yeah, he was kind of a two-hit wonder, but the film does have Lash La Rue- the Master of the Whip!  Sure, his last major work as a lead was in 1971, but it's an accomplishment.  The film is all about the titular power and it being unleashed.  I hope you like waiting an hour for any action, by the way.  Get out your all-powerful eagles for my review of... 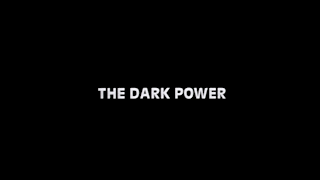 The film begins with an old man on his death bed talking about some dark power.  We get some 'Evil Dead' camera work during the credits which leads to...a kid being attacked by wild dogs in the woods.  He does his best 'crumble into a ball' defense, but is, thankfully, saved by an old man with a whip.  They really draw this thing out too, making me wonder just how effective the weapon is.  Anyhow, we learn that this man is the Park Ranger and was a friend of the dead man from the beginning.  He gets interviewed about his friend, the area and some mystical crap by a reporter.  Want to stop your movie dead?  Spend over ten minutes just talking about interesting things in a series of banal settings.  I've watched a documentary on a Font (yes, there is one) that are more interesting than this crap!  We learn that there were some sort of ancient Indians a long time ago that were evil and that they were buried nearby.  Wow, this would have been much more interesting if you could have at least afforded a flashback or something.  Eventually, we get to the point of this whole thing: the reporter sets up some teens to live in the dead man's former house.  Geez, took you long enough! 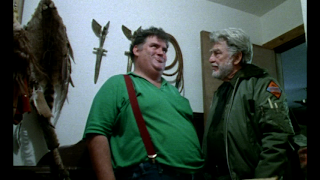 Warning: what follows are numerous attempts at comedy and social commentary.  A pair of young, white kids move into the place and invite another student: a black girl.  This upsets Princess Clara, I mean, the rich, white girl.  She make a big to-do about this, while I wonder what the hell I'm watching!  To get back at the girls for inviting 'a colored' into the house, she invites her douche-bag of a brother to live with them too.  In a 'wacky' scene, he shows up when the movie's hot girl is walking around in a cut-off shirt and panties.  Okay, so this movie does have some things going for it.  They juxtapose this bit of comedy with...long bits to set up the finale.  I wish that I could say that I care by this point, but I don't.  All you need to know is that someone moved an eagle statue that was set in the ground.  Evidently eagles are a powerful symbol of good or something, so this allows the evil to come free.  We get 'treated' to a long scene of the reporter and a kid from the court reading about the evil that can happen on some sort of anniversary.  This is what we get: people sitting around and reading books about something that might actually be interesting.  Finally, some monsters show up to revive the audience...I mean, me. 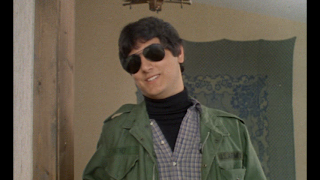 While the brother and his friends are drinking and just generally being drunken douche-bags, a quartet of Indian zombies crawl out of the ground.  They kill off most of the annoying people, including a throat-slitting of one idiot and making an arrow kabob out of another.  In a bit of overcompensation, this film kills off 3/4 of its cast!  They mix in some comedy, revolving around the Indians not running into the girls in the house, but it just feels forced.  You just killed four people, so now is the time to laugh?  A pair of them try to escape via a boat, but don't pull the rope in, causing it to be the least dramatic/successful escape ever!  They both die, as does the hot young woman from earlier.  Now you've gone too far, movie!  We're down to just our Final Girl and the black girl, but their fate doesn't look too good!  Thankfully, the old man with his whip is there to scare the monsters.  It seems that his whip is magic...for some reason and he can take them all...he gets knocked down.  The black girl saves the day by virtue of ending up in the closet full of eagle statues.  Wow, that's...lazy.  She kills three of them, but one of them survives to have a face-off with Lash.  This takes about five minutes and mercifully ends with a small fall.  The End. 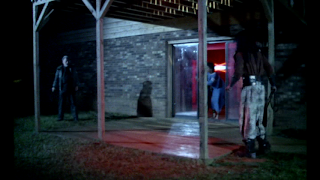 I wanted to like this movie, but it sucks!  I could get behind a silly '80s film starring a former-Western actor battling monsters.  It sounds like a bit of silly fun...but it is not.  This thing does not know what it wants to be!  It sets up a horror plot and completely ignores it for the majority of the running time.  Imagine if Evil Dead II had them go to the cabin and spent over forty-five minutes doing nothing but comedy.  Would you like that movie?  No.  If you want to make a comedy, make a comedy!  If you want to make a horror film, make a damn horror film!  Furthermore, if you want to spend twenty minutes explaining something evil and showing me nothing, make an audio book!  I really thought that this would be either funny, scary or both.  It was not.  It was boring as hell.  Mind you, the whole thing with Indians in the ending does help a lot...but you have to be patient to get that far.  If you think you're up for it, rent The Dark Power.  Maybe you'll laugh more than I did.  Thankfully, I have this to fall back on... 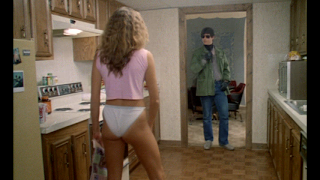 Up next, I cover a movie whose title speaks for itself.  What should I expect from a film called Blood Gnome?  Stay tuned...