At long last, the conclusion.  Well, unless you count that weird, spin-off Film.  Today's Film is Death Note II: The Last Name (sometimes without the number), which concludes the overall Story of L vs. Kira.  To recap, Light has a magic book which lets him kill people, but L is trying to catch him.  He has managed to fool everyone for the time being.  In Japan, the Films were released in May and November of 2006, respectively.  Here- you don't have to wait nearly that long!  Well, except for the nearly 10 years for me to actually post them.  In this Film, the Plot thickens, but thankfully in a not-too-convoluted manner.  I've spoken before about how the last section of the Anime got WAYYYYY too complicated and confusing to really follow.  Does the Film provide the proper Climax that this Story deserves?  To find out (sort of), read on... 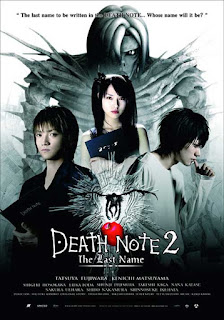 In the wake of his girlfriend's death and his seeming-exoneration, Light is working to catch Kira...which he is.  Life is funny sometimes, huh? 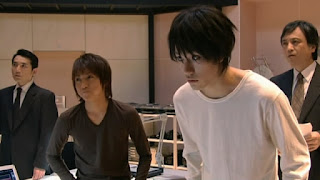 While L still distrusts him- rightly, but with no reason at this point- a new series of killings starts to happen.  It isn't Light, so who is it? 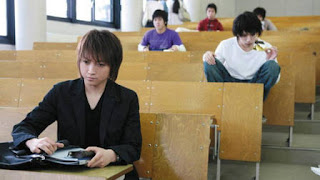 It is Misa (not blond here), who was saved by a Shinigami and has fallen in love with Light.  She will help him kill L! 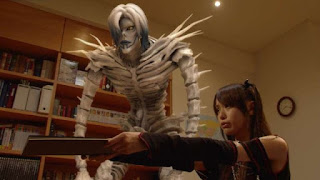 When things start to turn against him, Light makes a confusing gambit with the two Shinigami and a third party.

On the plus side, there's no Near, Mello or confusing Plots with the Mafia.  Yea! 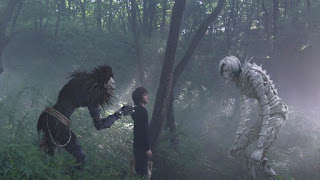 As L gets closer to the truth, will it spell his end or lead him to victory?  Yes. 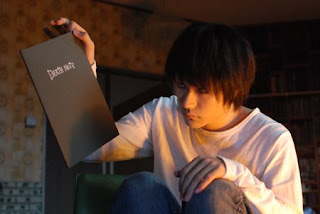 Will Light get his wish or will all of his pretty-evil dreams be dashed?  To find out, watch the Film.  The End. 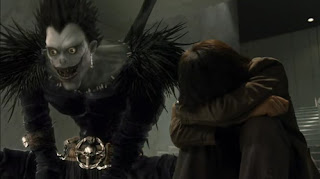 A solid, if familiar conclusion.  Is it wrong to point out that this one doesn't change things up too much?  I mean, I know that it is just another adaptation of the Story.  I'd probably get super-pissy if they changed too much, wouldn't I?  I'd be like those guys online who hate this Film since the Inspector doesn't have a Mustache and Misa is not blond.  One problem is that seeing Plot Points that seemed silly one time for a second time only accentuates things.  What are the odds that L would go after Misa right after she sees him (which he didn't plan for)?  Why does he not ever trust Light when he has no reason to think that he's guilty?  Why does he think that fake things that he can't possibly know are fake are, well, fake?  L is mostly-handled well, but there are times when he is a bit like the Bat-God Trope that has plagued Comics for the last few Decades.  He continues to do and think things in spite of the Plot, which is kind of a cheat.  Regardless, the overall Film is still quite good and does the Story justice.  It is nice to see the stuff that I thought was excessive from the Anime excised from the run-time.  With a new Show, they are probably back, right?  I'll let Bob deal with that one... 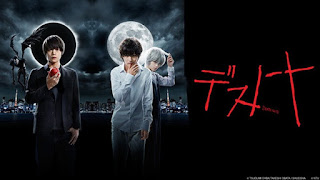 Next up, I finally get around to dealing with my rapidly-shrinking YouTube Film 'Queue.'  When in doubt, go with a Remake that nobody remembers.  Stay tuned...
Posted by Alec Pridgen at 11:53 PM