At last, I finally do this right.  Basically, I watched both of these Films quite a long time ago, but never reviewed them.  Why?  Who knows with me?  I only discovered this error when I finally Reviewed the Anime and tried to link to my nonexistent Posts.  Let's remedy this now, shall we?  Today's Film is Death Note, the first half of the Feature Film Adaptation of the Anime based on the Manga.  Sheesh- is it from The Bible too?!?  It tells the Story of a young man who starts to change the World via mass murder.  It sure does sound like The Bible!  Anyhow, this is a pretty familiar Story to most people by now, so I'll focus more here on what is different, what could be different and what should be different.  I will do my best not to leave you neophytes out though.  To find out more about this quite popular Adaptation, read on... 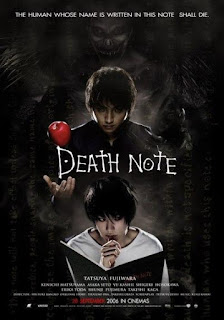 The Film begins right away with some random folks being killed.  Some of them are clearly sort-of-evil, while others are just rich assholes.

Hey Kira- ever hear of the Koch Brothers? 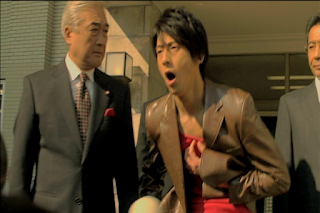 Just like in the Story proper, we eventually learn that Light got the Death Note, a book that allows him to kill people (mostly) at will.  This time- the Shinigami is a freaky, CG creation. 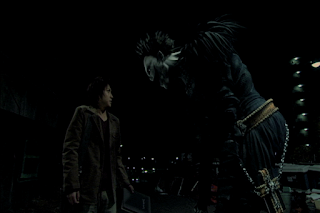 The Police work with the mysterious L to solve the case.  While he's actually quite good here, it is worth noting that the guy who plays the Chief (and Light's Father) is the same guy who played the Chairman on the original Iron Chef!

Minor note: Light doesn't play Tennis in this one and he doesn't meet L for a while, so no rehash of the Anime's silly Tennis Duel bit.  I'm...sad? 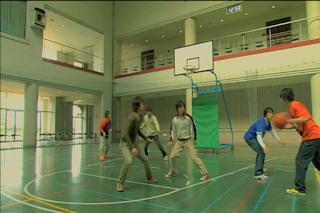 The bit on the Bus with the FBI Agent and the Subway Scene play out as normal, although this guy makes the silliest Face of Death I've seen in a while.  This is supposed to be serious, right? 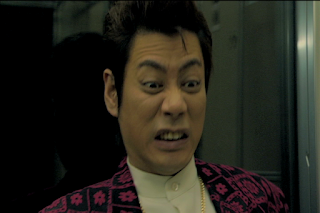 In a big change from the Anime, the wife of the FBI Agent Light killed takes his girlfriend hostage and then kills her in a Museum when he won't confess to being Kira.  She then kills herself in the world's least-bloody headshot. 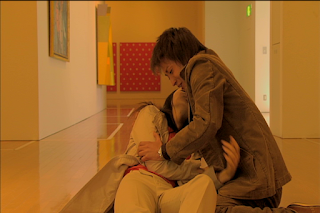 However, we learn that this was all set up by Light- including the death of his girlfriend.  Cold, bro!

It is also worth noting that this Plot Point hinges upon Japan having super-low gun ownership numbers.  That must have been awkward in some States to hear... 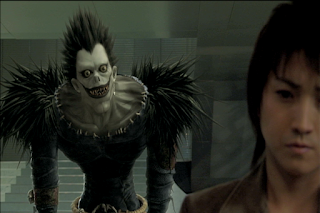 At the End, Light and L finally meet for the first time as the former can join the Task Force to catch Kira.  The latter seems to let on that he still suspects Light being Kira by way of this chip bag. 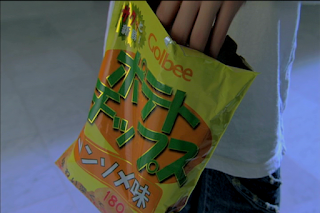 Better and worse with real people.  As I stated earlier, I'm in kind of a weird place with this Film.  I watched it long before I watched the Show and now I'm watching it again.  First, the better.  With a condensed run-time, some of the silly stuff doesn't make the cut.  Likewise, there is less need to recap stuff when you are doing one, 2-hour Film.  To put things into comparison, the Show runs 888 minutes (counting Intro, Recaps and Outros).  In contrast, the 2 Films run at 267 minutes (counting Credits).  One thing that works a little better here is the (admittedly only one so far) Shinigami, as it is the only creature that is not flesh & blood.  That's not a knock on the great animation in the Show, mind you, but just a difference that comes with a change of medium.  I really liked the devious (if complicated) nature of Light's final act in the Film too.  Now we have to get to the bad.  To be fair, there's nothing really all that bad here.  I can joke about them casting 'Chairman Kaga' in this one or one guy's funny death face, but this one isn't bad.  My issues are really minor ones that stand in contrast to the Anime.  I prefer the more introverted look of L in the Anime to the one in the Film.  That's just me- you may disagree.  I also felt like I understood Light's motivations better in the Anime.  When you understand him better, big moments (like his last-minute betrayal) feel more shocking and, well, earned.  It is still a great moment, but not as great as it would be in the Anime.  If you just know about the Show, but haven't seen it, then there's nothing to lose here.  As a (confusing) bonus, most of the Anime's English Dub Cast is doing the English Dub here, so the change is less jarring.  Before I get to the second half, please consider how easy it is to buy dirty Magazines at a News Stand in Japan... 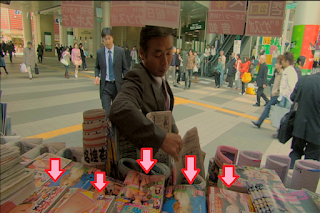 Next up, the Studio-mandated Horror Movie Spin-Off.  Oh joy- another killer Doll.  Stay tuned...
Posted by Alec Pridgen at 10:05 PM