Since I don't speak Russian, I had to go with Plan B.  As it turned out, it was...not so great, but better than it sounded (but just barely).  Today's Film is Cannibal Holocaust 2: The Catherine Miles Story, a 1985 Film known by many different names.  It took more work to come up with all of the alternate Titles than to write the Script.  Also known as Amazonia, it tells the fictitious Story of Catherine Miles- duh.  Who is she?  Well, nobody.  In context of the Story, however, she was captured by Cannibals, lived for a year and then did something bad.  Is this at all like Ruggero Deodato's Classic?  It sure does use their music, if that helps.  To find out more, read on... 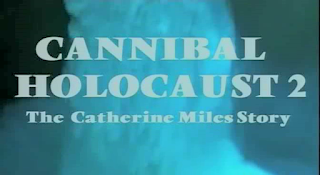 B\A lovely, rich family goes out boating.  It's not a 3-Hour Tour is it? 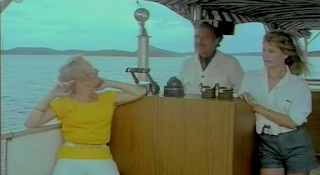 Instead, the Parents are both killed via dart guns, while Catherine is poisoned.

A Villager shows up and takes Catherine to his Tribe...but only after decapitating the pair. 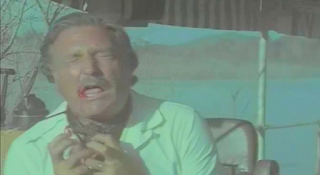 Life in the Tribe is rough, but thankfully-sparse on ritualistic animal slaughter.

We still get the 'Amazonians paint their faces white' trope though. 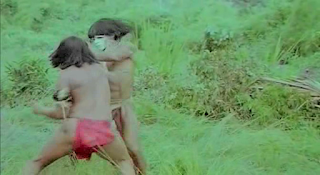 I have to discuss how convoluted this Narrative is, by the way.  We see Catherine interviewed by a Reporter, who proceeds to ask about the Trial.  The Film then cuts to the Trial...in which she re-tells the Story of her year in captivity.

So did she tell him this whole thing too or...I don't know anymore.  Moving on... 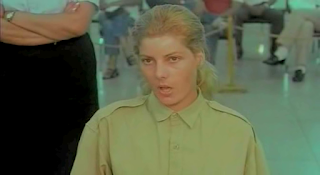 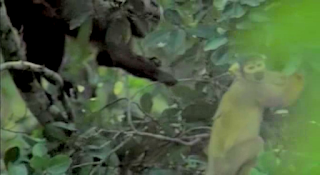 As the Film progresses, Catherine sees some White Hunters and talks about how evil they are.  She is saying this to the Villager who bought her as a Slave.  The same Village which 'took her cherry' without her consent.

You know what perspective is, Catherine? 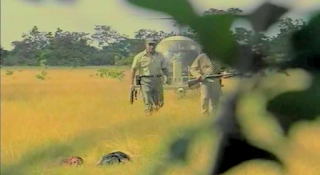 Things take a turn when the Villager- who has learned English- tells her that the Villagers didn't kill her Parents- her evil Relatives did.

Maybe they did, but why does she automatically-believe him with no evidence?  You not bright, girl! 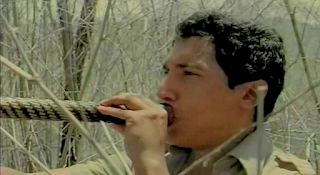 She kills the pair in their bed and decides to leave the Village afterwards.  This leads back to the Trial- finally! 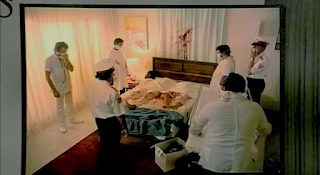 In the aftermath, they do their best to make this fake tale seem real with staged Police Footage (above) and the 'Hey, Don't Shoot Here' Trope supposedly showing the real Catherine.

Oh, so it is your fault that we got The Fourth Kind.  The End. 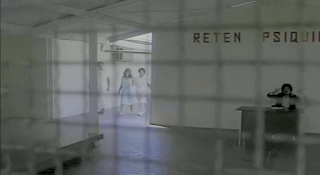 Eh, not bad.  The Film is pretty 'by the numbers' and really not that engaging.  Part of the problem is the convoluted Narrative.  Why can't you tell this Story in order?  If you want it to seem real, don't show me obviously-fake footage showing what supposedly-happened to Catherine.  If you want it to be more engaging, don't complicated matters!  It wants to have its cake and eat it too, as the cliche goes.  It doesn't really succeed at seeming real, so it is alot of effort gone to waste.  Oh well.  All I can figure is that this was done to compensate for the lack of big, bold moments that you really expect in these.  There's not much gore here and there's really not any sensuality on-screen.  There is plenty of Nudity, but it is nothing special.  No Ursula Andress, no sale.  Is this a Cannibal Holocaust Sequel?  With the 3rd Act Plot Twist, it at least takes on the slightly-META tone of that Film.  It lacks the punch and sharpness of said Film, so I'm going with 'no.'  I hope that the other 'Sequel' does a better job.  You know what is ironic though?  The Film literally did cast a Savage- Deborah Savage! 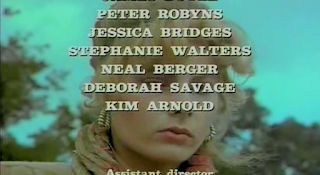 Next up, I tackle an old movie with a far-out premise.  Hey- you got your Military in my Werewolf movie!  Stay tuned...
Posted by Alec Pridgen at 11:10 PM