Another film from The Asylum, huh?  Well, as long as it's not about a national tragedy, I guess I can manage.  This 2006 film is a cash-in on...well, I don't know what.  It pre-dates Twilight and it certainly isn't going for that demographic!  Meanwhile, Blade: Trinity came out a couple years earlier.  Do they actually make movies just to make movies?  As it turns out, they do that sometimes.  Mind you, the result is crap like Mega Shark vs. Giant Octopus.  Of course, to be fair, you could argue that it's just them cashing in on the slew of Direct-to-DVD monster films, as opposed to one specific film.  I suppose that I could just act like this is a rip-off of Vampire Assassin and call it a day.  So what kind of Dracula film do we get here?  Well, for starters, it's set in the present day.  While it does have a Van Helsing, he does not play that much of a part, especially when compared to the film's real lead.  I guess it's supposed to make for that by having hot babes with automatic weapons.  Oh yeah, Dracula doesn't really do a whole lot in this film until the Third Act either.  The film's real villain is an evil vampire woman named Elizabeth Bathorly.  No, I didn't not misspell that.  That's really her name!  Can you get a copyright on dead, historical names?  Aside from that silliness, will this movie be good (for an Asylum film)?  Get out your silver bullet collection for my review of... 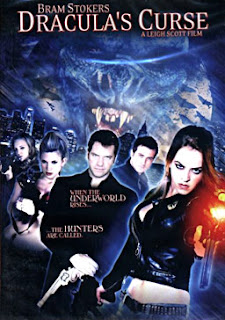 The film starts off right away with an action scene.  That's either a good sign or a really, really bad one.  Am I getting an action-packed spectacle or a film that is going to spend the following thirty minutes just talking?  Basically, a bunch of vampire hunters wander around a vacant warehouse and kill some low-budget vampires.  Leave it to L.A. to keep vampires in storage!  The group splits up, leaving our lead and his lady to kung-fu fight a 'blacula.'  Right after that, they are invited to a meeting of the vampire lords, which they accept way too easily.  A meeting, huh?  I guess I got my answer!  All of this is a lead-up to the vampire hunters (led by the most-current Van Helsing) making a non-violence pact with the vampires.  They don't hunt humans for sport and humans don't kill vampires because nothing is on TV.  During this, we see that most vampires are normal-looking, save for about three of them.  One of them is a dead ringer for Nosferatu, another has the Buffy-style 'bony face' and the third is, well, Satan.  He's not really, but he does have red skin, horns and yellow eyes.  As much as it bugs me that some vampires in the Twilight series have super-powers and others don't, the existence of three freak vampires is more disturbing!  Naturally, they don't bother to explain this.  Anyhow, the film does a five-year time-jump because...I guess, it feels like it. 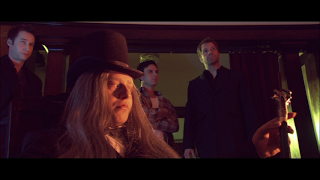 Right after all that scintillating talk, we get a young couple getting attacked in their bed by hot vampire chicks.  Actually, they just attack the girl and take him.  The lead vampire hunter shows up (looking no different, by the way) and takes him along for the explanation as to what's happening.  Basically, an evil vampire lady named Elizabeth Bathorly was killed 100+ years ago by the vampire lords, but her minions have started to kill people now.  Is she alive or dead (as far as vampires ever really are, mind you)?  Are you ready for the real bullshit now?  The lady was attacked because she is 'a pure-blood.'  No, it's not what you think.  Apparently, Dracula was very emo in the old days and hated himself for being a vampire.  As such, he only turned four people- his brides and Bathorly.  Before he vanished, he sired some kids- they're not vampires.  However, his descendants carry his 'pure' 'blood' in them, making them popular prey for vampires, since it makes them stronger.  I'm not going to even dignify that with a rebuttal!  The bottom line: the council refuses to help them fight Bathory until the leaders- including 'Nosferatu,' 'Buffy' and 'Satan'- are killed.  That just leads one vampire lord to ally with the humans.  I smell a sitcom! 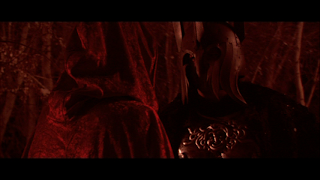 This thing is only going to get dumber before we end, so let's not waste any time.  The hunters 'get the band back together,' save for the leader's girlfriend.  She's moping about something and also worried about her sister.  As it turns out, her sister is a 'pure-blood' and gets kidnapped by Bathorly to be turned.  The boyfriend gets trained to fight vampires alongside the others, who are later joined by the woman after she learns the news.  Oh yeah, she also shoots up a vampire night club, inadvertently killing one human in the process.  In a completely pointless sub-plot, Van Helsing is dating a vampire, but she won't turn him.  By the way, she's played by the same lady who was the lead in Monster and The 9/11 Commission Report, so I really don't care.  Before the final fight, the Vampire Lord turns on our hero and the girlfriend, leading to a silly fight where they die.  In the end, the group attacks Bathorly, but she has energy-projection powers.  You'll see that silly idea in another film this month, so keep your eyes open.  When all seems lost, the vampire hunters' leader reveals the truth- he's Dracula!  Yeah, apparently he gave up his powers in a previous treaty, but that got broken due to the girlfriend shooting that guy in the club.  He abruptly kills Bathorly, while 'Monster Girl' turns Van Helsing, leading to a silly posedown at the end.  Whatever.  The End. 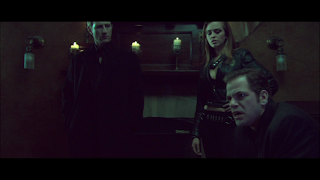 This movie sucks, although it is better than some Asylum films.  The plot is goofy and doesn't make a whole lot of sense, but flows in a pretty straight-forward way.  The action is decent and the effects don't totally suck.  Now, the bad stuff- the 'Satan' vampire, the renaming of E. Bathory, the revision of Dracula lore, the revision of vampire lore, the stupid plot twist and the abrupt ending.  So much of this movie is just built around them making shit up because they feel the need to have numerous 'explanation' scenes.  The boyfriend character is only there to serve that role and, otherwise, does barely anything.  Speaking of which, the guy playing Van Helsing is so listless and dull that I got him confused for about half of the movie with the Vampire Lord guy.  Seriously, he served almost no role too!  It's still better than how Dracula 3000 used him (e.c. not at all), but I refuse to make that my lithmus test.  Almost none of the new stuff makes any sense.  In addition, plot holes abound.  My favorite- Bathorly doesn't recognize the lead as Dracula, despite us seeing a flashback where he unmasks in front of her.  Was the love of your life so insignificant to you or did the writer just paint himself into a corner?  If I ever had to recommend an Asylum film, I guess it might be this one.  It's stupid, but rarely that dull or unamusing.  You're first in the dumb row, movie! 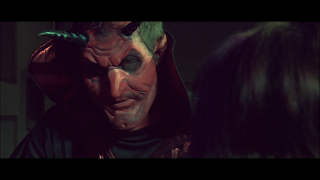 Next up, Al Adamson brings us a Dracula film with almost no Dracula in it.  In exchange, we get...Svengali?  Stay tuned...