What makes a film a sequel?  The return of popular characters?  A setting that has more trouble to cause?  A familiar power manifesting itself in a new way?  All of these are valid definitions in their own way.  This leads me to House II: The Second Story.  Do any of these elements occur in this film?  No, No and No.  William Katt is not back as the author, replaced by two dorks, one of whom gained minor fame on Ellen's sitcom in the '90s.  The titular house is also not there, since it was freaking burned down.  The monsters don't return either, replaced with even goofier ones.  In fact, there is only one connective thread: Kane Hodder.  As both a Stunt Man and the Stunt Choreographer, Mr. Hodder has a part in House 1, 2, 3 and 4.  I'll get into those other two films later though.  So what's this film about?  Well, it's about a house- hence the title, I guess- which holds a treasure.  This leads to a grand adventure, a zombie prospector and a giant chicken.  This is going to hurt, isn't it?  Get out your crystal skulls for my review of... 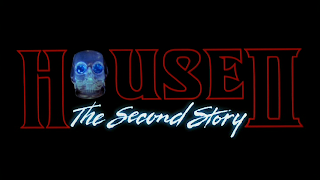 The film begins with, well, a ton of comedy.  Mind you, it's comedy on par with Lucky Stiff, so don't get your hopes up.  Basically, our two leads are living in a house that has always belonged to their family.  They're joined at certain points by a set of supporting characters, including a silly redhead (the former Ms. John Ritter, Amy Yasbeck) and a love interest character.  They don't add much to the film though, so let's just move on.  Of course, I should also mention that Bill Maher has a small role here, as he did a ton of these kinds of movies in the '80s.  We haven't forgotten, Bill!  Our heroes learn about a treasure hunt that was once undertaken by their great-great grandfather.  They are convinced that a map they subsequently find is related to the treasure. The pair go out to the yard only to discover a different kind of treasure: the mummified body of their great-great-grandfather.  Don't worry- he's alive.  No, they don't really explain how.  He awakens and tells them about the treasure that they must go out and seek.  It's a crystal skull that has some sort of powers that I can't be bothered to remember.  This is not getting better... 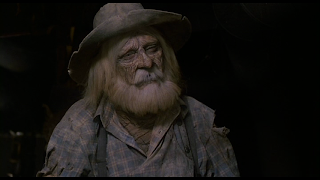 Finding the object necessitates a trip to another dimension.  Yeah, that thing that was weird in House is just kind of accepted here.  It's a jungle-style environment that is about as low-rent as you can get.  Picture the jungle scenes from Night of the Sorcerers and you've got this film.  Their adventure includes a battle with some jungle animals and a pterodactyl.  Eventually, the pair escape from the area with the treasure.  You know what that means, right?  Party!  Unfortunately, the presence of the object leads to some undesired guests showing up to try and steal it.  Add in some awkward 'don't look behind that door' comedy and you have a nice party.  With a costume theme, a spandex clad Kane Hodder can walk in without a second glance.  He makes short work of the zombified grandfather and our heroes, but they manage to escape back into the jungle dimension.  Sure- why not?!?  They try to take out the giant of a man (credited as 'Gorilla'), but fail in all of the ways you would expect.  Thankfully, a claymation dinosaur thing shows up to kill him and just sort of leaves.  Thanks, plot device!  Unfortunately, another demonic force is lingering about: a zombie cowboy.  I wish I was kidding. 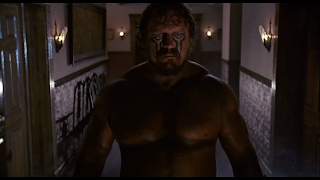 The skull's presence creates all sorts of messes in the house and trouble comes often.  They end up with a giant chicken in the house because, well, just because.  A cult ends up in the basement of the house, which turns out to be quite gigantic.  They are led to this by an electrical short of some kind, prompting them to call an electrician (Cheers star John Ratzenberger).  Yes, this series is two-for-two with Cheers stars.  He proves oddly-accepting of this whole thing and helps them fight off the cult with some swords.  I get that this is a comedy, but I would like some logic here, please.  When the danger finally appears to be over with, the zombie cowboy rises up from the dinner table and steals the skull.  Not only that, but he shoots the great-great-grandfather.  Despite him surviving for nearly 200 years in a grave, this kills him.  It probably has something to do with the skull, but still feels really dumb!  The villain captures everyone save for our lead actor (Arye Gross) and challenges him to a showdown.  They have a face-off and...the guy misses every shot and runs away.  He eventually gets a burst of courage and confidence and does better in the rematch.  He manages to blow up the zombie's head and, big surprise, the house burns down.  The End. 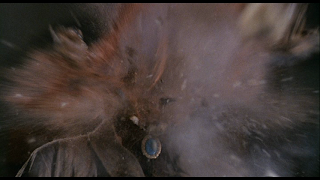 This movie...is just plain silly.  The plot is weird, setting up a loose structure to allow the film to just meander about in whatever direction it feels like.  Seriously, what is the focus of the movie?  We have dinosaurs, a cult, giant chickens and Kane Hodder in a Speedo.  Is this the Mad Libs screenplay I've always, um, farted about?  The tonal switch to full-comedy is not as jarring as you might think, but is still distracting.  This is what would have happened if Universal had actually greenlit the original screenplay to Jaws 3- Jaws 3, People 0.  I have to wonder who was begging for this, that's all.  Just to note: I watched both House and House II in the span of about four hours (counting a small break).  If you really want to see how different the two films are, do it this way!  It's hard to recommend this film to many people because it is just so damn silly.  I love goofy movies, but this movie was still weird to even me.  If you have a real quirky taste, you may love this movie.  A lot of you will probably just wonder why the hell this is called House II. 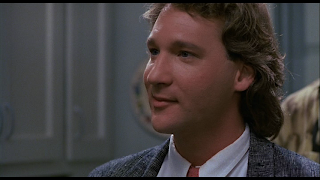 Up next, a monumental event happens at Mondo Bizarro- my 1,000th post.  To celebrate, I review one of the most shocking and polarizing films from the video age.  Stay tuned...
Posted by Alec Pridgen at 11:36 PM