Who doesn't love He-Man?  Okay, besides you weirdos on the internet who are trying to make him out to be gay and see sub-text in everything.  I'm not here to talk about that iconic Filmation series.  Instead, I'm here to talk about it's sequel... 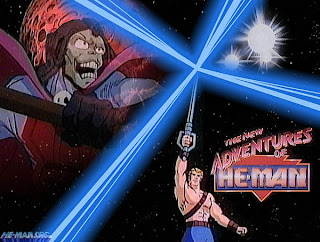 The story begins by having a group of people from the future arrive in Eternia via a spaceship (damn you, retroGRADE!) and seeking out it's hero: He-Man.  Unfortunately, they run into Skeletor first, who tricks them.  Ultimately, He-Man defeats Skeletor (for now) and agrees to go with them to save their future world.  Before he goes, he reveals his dual identity to his parents, a serious plot point that has no value, since they never showed him return.  By the way, He-Man doesn't realize that he could be gone for years and return a mere second later, I guess.

Anyhow, He-Man goes with them, while Skeletor sneaks on board for the trip.  They both arrive a great new world full of advanced technology, nice people and- by the way, space pirate surrounding the entire place!  Skeletor joins up with a group of them after they are defeated by He-Man. 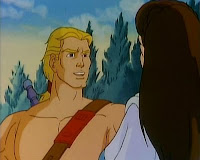 The series is pretty conventional- save for the new characters and location- and features the usual battles of good vs. evil and some random character episodes.  A couple things stand out of note...

* One story revolves around Skeletor seeking out a crystal to increase his strength.  In the end, he has seemingly-lost when the crystal is destroyed.  However, he actually got the power first and kept it for the rest of the series! 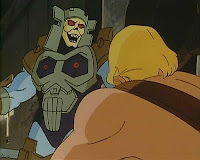 * The cast is full of characters with ridiculous names and one-trick-pony powers.  For example, you have Slushhead, Staghorn and Flipshot.

* Lastly, he has a very peculiar ally: Sagitar, a half-man/half-man centaur.  I'll give you a moment to process that and then show you his toy. 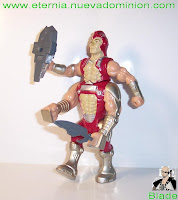 That's The New Adventures of He-Man in a nutshell.  A weird and quirky take on the character featuring aliens and spaceships instead of swords and magic.  It doesn't make a whole lot of sense, but delivers all of the conventional fun that Saturday morning cartoons gave us.  Why I don't remember ever seeing it as a kid is beyond me.  If you've never heard of it, give it a look.  It may not blow your mind, but it's something of note still.
*
Up next, a pair of updates looking at the two shows based on everyone's favorite green lizard.  Stay tuned...
Posted by Alec Pridgen at 1:11 PM