Is it not clear that I love Comic Books and Cartoons yet?
When the two of them coincide, it is always great.

Or sometimes it's just okay and I can laugh at the silly clichés.

This is WildC.A.T.S, a 1994 Cartoon Show based on the semi-remembered Comic Book.  Back in the day, I had a few issues.  Mind you, I bought LOTS of Comic Books as part of the 'Speculator Boom' back then. 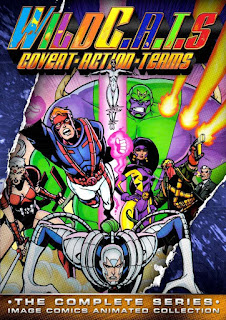 This is the titular Team.  They are either directly Kherubim (a good Alien Race), an Android made from a Kherubim (Spartan in blue), descended from Kherubim (like Warblade in the middle and Voodoo on the right) or just, well, Grifter.

As my Roommate says, Grifter has the power of 'guns.' 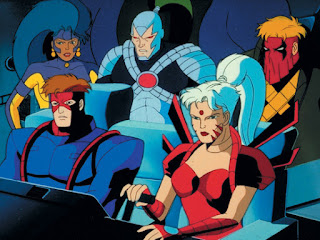 This is Helspont.  He's an evil Daemonite who wants to rule the World.

The Plots all revolve around him either fixing his ship, finding the Show's MacGuffin (the Orb) or something in-between. 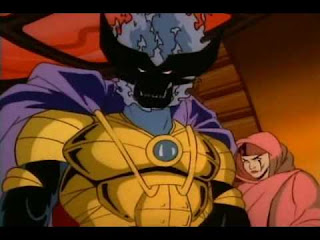 If you know the Comics, there are many changes.  Some are small and understandable- like ignoring Voodoo's past as an Exotic Dancer.   Others are bigger and more notably-wrong for the source material.

For instance, Grifter and Zealot (below) are a will-they-won't-they couple here. 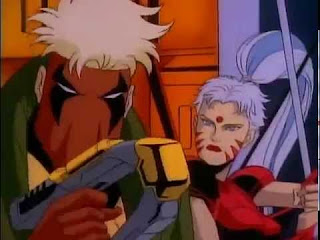 The Show has a pretty basic structure...

Episode features Plot about something Helspont needs.
Someone from Character's Past is involved (like Maul's Dad being the Archaeologist used).
Character Plot wrapped up in Episode.

A few tweak that *slightly* by having Helspont get what he needs to keep the Plot going, while others have him all 'I'll get you next time, WildCATs!'

On the plus side, they end with an actual finale and no Cliffhanger. 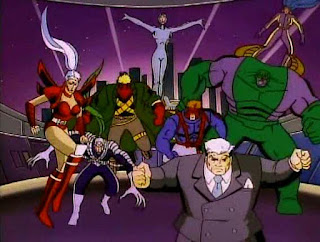 13 Episodes of pure, silly joy.  Is it a good Show?  No.  Is it a fun Show?  Yes.  The Plots are all pretty standard and the 'It is Character X's Sub Plot this Episode' thing is pretty predictable.  With the 24 minute runtime and padded fight Scenes, they are often rushed to hilarious degrees.  In Episode 2, for instance, Spartan meets a woman from his past and reveals his secret.  She tells him that she can fix his body and he initially disagrees, claiming that he's needed.  The next Scene, he's all on-board...and then rejects the offer again 2 minutes later.  That is especially funny when he calls out Warblade's commitment to the Team later- hypocrite.  They only really break this formula for the final 2 Episodes.  Those do feel suitably-epic, even if the Show is as silly as ever.  I'll be honest- I thought they were going to have an open Ending as the Finale played out.  It was good to be wrong in this case.  The action is decent, but they definitely don't have enough characters.  We get the same few henchmen in nearly every Episode.  I feel like a similar Show mixed it up a bit more- if only I could think of the name.  The Writing is also nothing special overall.  It's not terrible- just not great or all that inspired.  That's the Show in a simple summary- not great or all that inspired.  If you look at the Characters, you can see the obvious influences.  Hell, one of them is practically just Deadpool!  If you remember the Show, you can watch it for free on Tubi.  If you didn't see it, watch it to see what entertained weirdos like me back in the day.  If only there was a more famous Show like this to watch instead... 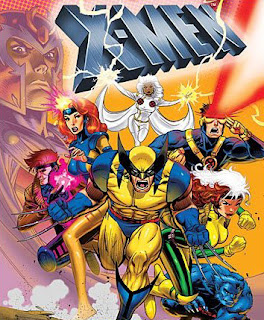