If it is any wonder why we have a third John Wick Film, look no further than Keanu Reeves other Films.  The fact that you're probably Googling what they were now tells the whole story.  This is one of them... 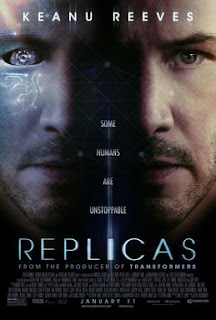 Keanu Reeves is a Scientist (pause for laughter) who is trying to transfer consciousness from man to robot.

Every attempt has ended in rejection of the host body and failure.  This one tried to rip its own head off, so...yeah, failure.

He's somehow the world's most lucky and unlucky man all at once.

A car accident kills everyone EXCEPT HIM.  What...luck?

He goes to his comrade with a daring (and illegal) plan- clone and restore his family.

Can they succeed?  Can they avoid trouble with their Boss?  Does the Film abuse Dutch Angles to show uncertainty?

Will they find out the truth?  How will they take it?

To find out, watch the Film.  They really need to recoup that money on Streaming, so help them out.

An interesting concept lost somewhere along the way.  Here's something you need to know- the Film was made in 2016.  It was first screened in 2018.  It was released in January 2019.  It was released on DVD/Streaming in April 2019.  So yeah, something clearly went wrong!  On the positive side, Keanu does his best with the role.  There's points early on where he has to appear sad and he totally nails it!  Other parts are less convincing, as no amount of techno-babble made me buy him as a Scientist.  The premise is interesting and could easily have gone many interesting places.  Sadly, they picked the least interesting option.  Without SPOILERS, the Plot detour is disappointing and it hits every obvious beat along the way.  The Ending is pretty abrupt and feels more like a stop.  It's like a Dad telling a Bedtime Story before he sees a text alert that Sportcenter is about to start.  Suddenly he's all 'And they lived happily ever after.  The End!' and rushes out the door.  The payoffs just don't deliver.  It's so close at points to working and it's a shame to see things end up how they do.  A longer, better Cut of this would be nice.  For instance, more than 15 minutes before the Family is dead after all of ONE SCENE with Reeves.  It can't quite commit as to what Genre it should be- for the record, it should be Horror- and the big turn (or two) is just not delivered.  Replicas starts out strong and just peters out to a forgettable Sci-Fi Drama.  On the plus side, it did show us the thrills of clearing out your Inbox!

An interesting premise that doesn't really develop.  It seems to be building to something interesting, but then completely sidetracks for no good reason.
Posted by Alec Pridgen at 11:21 AM