The return of Andy Sidaris...kind of.  Today's Film is Enemy Gold, a 1993 Film released the same year as the planned end to the LETHAL Ladies Series.  By this point, the Cast was mostly changed out and that Film would prove to be the last thing that Dona Speir would do.  Don't misunderstand me- she's currently alive at the time of Writing; she's just not Acting.  So why make another Film so soon?  Well, he didn't.  Instead, his Son named Christian Directed this one, with Dad and Mom as Producers.  In other words, they paid for it.  The Film is Co-Written by Drew Sidaris.  Who is that, you ask?  Why it is...Christian Sidaris, being credited by his middle name first...for some reason.  I don't get it.  In any event, this is not an official Film in the 'Series,' but is basically the same Film with minor tweaks.  Let's see what the Son can do, I guess....
This one begins quite differently than the rest with some footage of Civil War re-enactors.  Odd.

...oh, this is supposed to be real.  Right!  So this one actually begins with the set up for the story- lost Gold. 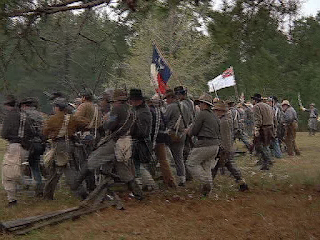 We meet 2 new Agents- played by previously-seen Actors- and a new one.  They stop some drug dealers, but get busted by their Regional Boss.  Why? 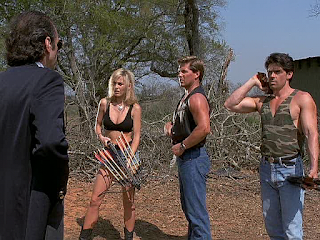 Because he's corrupt- of course!  He's working for this Drug Lord- played by that guy who is in all of these- and suspends them.  The other villain wants more. 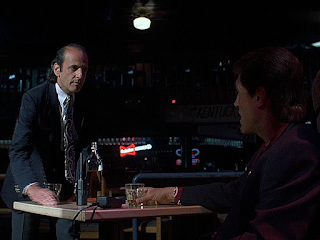 As for why their Boss can't help them, she's too busy posing naked for the Movie.

Yes, she does appear topless and objectified before even being given a name or personality. 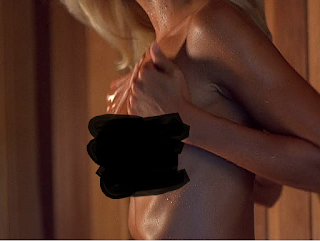 The bad guy hires a lady assassin and it's...Julie Strain...again.  She literally just played this role in the last Film! 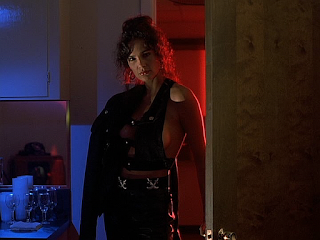 The trio decide to go camping and start looking for the lost gold.  They find a Diary that leads them to it, which is notable because... 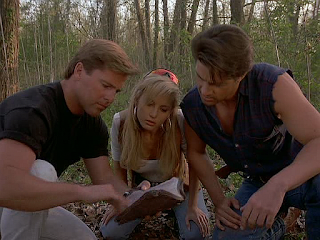 The man's story ends with both him and his companion dying after hiding the gold.  Did his diary cover this part?!? 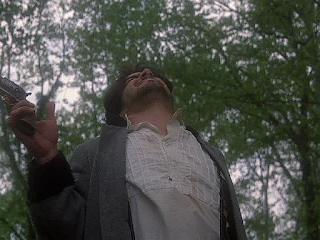 Skipping past the random, drawn out Action Scenes and the numerous PG-13 Sex Scenes, the two villains both find the gold and fight over it.

In true Sidaris fashion, it is solved with an unusual explosive device (a crossbow bolt). 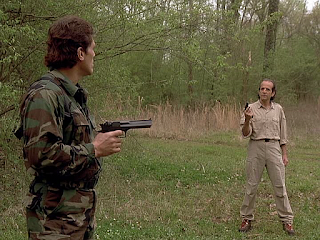 They celebrate by way of one guy having one more Sex Scene with the Boss and then a wrap-up...where they tease doing it some more.  The End. 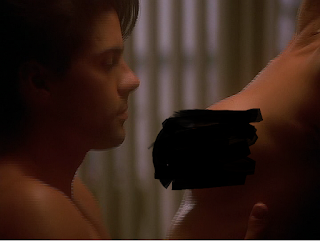 Through a mirror badly.  This is NOT an Andy Sidaris Film.  This is an Andy Sidaris Film.  While he's not the Writer and Director, it is still clearly his Film.  It is kind of like how the Ninja Turtles Films weren't actually made by Michael Bay, but they also clearly were made by him.  In this case, it is a bit more over though.  There are still hot Government Agents fighting bad guys over some MacGuffin (be it gold or a gem or something else).  They all end up having sex with each other.  They always blow up the villain.  They always wrap up happily, despite murdering anywhere from 4 to a dozen people in the Film.  Christian Sidaris did nothing to change any of this.  He just made the same Film with some of the same Actors.  What's worse- he did it in the same year as the 'Finale' to the Series.  In other words, he sold the exact same thing less than 12 months since the last one.  Also worth noting- Hard Hunted and Fit to Kill also came out in 1993.  Damn.  The Sidaris Family must have been 'laughing all of the way to the bank' (assuming these made much money)... 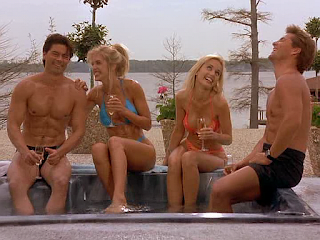 Next time, an obscure Italian Horror Film.  Will it be as interesting as the Title implies?  Stay tuned...
Posted by Alec Pridgen at 1:59 PM