After being burned by Batman v Superman and Suicide Squad, I was wary of this sudden Film.  Was I right to wait or should I have seen this sooner? 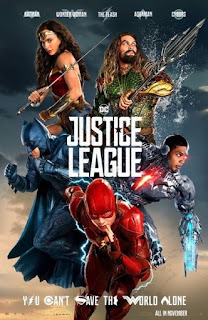 The Good
- Wonder Woman, as always, is the best part of this DC Film.
- Superman's obvious (but non-promoted) return delivers in a nice (if obvious) way.
- Speaking of Superman, he's friendly, dressed brightly and actually smiles (in his tiny role).
- While not entirely-earned, the Film's epic scope works for the most part.
- Joss Whedon's contribution means that the Film is more fun than it was going to be under Snyder.
- The Franchise's 180 to being about 'hope' and 'light' is welcome- transparent as it is.


The Bad
- In one Film, they have to introduce The Flash, Cyborg, Aquaman, Steppenwolf, Mera and the Mother Boxes.  Damn!
- The Parademons looks neat for one Scene, but quickly become yet another disposable CG Army.
- The two-for-one special of ripping off Spider-Man: Homecoming's intro AND Superman's CG upper lip.  I mean...wow.
- The obvious Reshoot moments that they fail to hide (like having Bruce just finishing shaving his new beard in the span of a Scene Change).  Case in point: Batman's quip in a suddenly-empty space.
- The Cinematographer is so in love with shooting Gal Gadot's ass that I feel like I objectified her by proxy.  Fast & Furious 5 was more subtle than you!
- The awkward mish-mash of Snyder's 'life is pain!' Story/Setting with Whedon's love for banter doesn't work as well as it should.
- While he should be big, Cyborg is basically just a walking Plot Device.  Sorry, Ray.  Oh and his CG is spotty.
- While I liked Momoa as Aquaman, he's basically just Drax, right?  Yeah, he is.
- Is it too much to ask that we be rid of Jesse Eisenber's Luthor?

In summary, Justice League has good moments.  It is arguably the second-best DCEU Film (low bar, admittedly).  It would just be so much better if any of this was built-up properly.
Posted by Alec Pridgen at 9:58 PM