Society is a really-interesting Film.  It is a slow-burn Film to a crazy reveal.

It also never got a (Film) Sequel, which is a shame.

This is obviously a more recent Poster, but, well, I don't need to mess with this one... 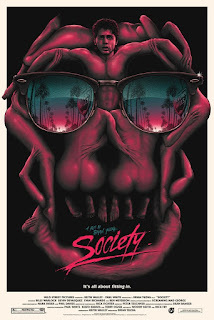 While a bit of a SPOILER, it doesn't actually explain what the Film is about.

It sure does make you want to see it though, right?