Spoiler Theatre: A Nightmare on Elm Street, Ringu 0 and Another Film

Well, nobody has yelled at me or picketed the website, so the segment goes on.

First up, the seminal classic A Nightmare on Elm Street.  Freddy Kreuger is a burned-up, sex fiend that targets the children of those who did said 'burning up' to him.  He attacks the kids in their dreams, but seems to be beaten.

Our heroine says good-bye to her mother and prepares to leave for School when... 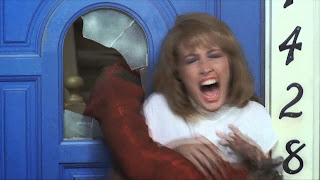 BAM!  Freddy attacks!  She's still in a dream and about to die.  Rough stuff.

Next up, Ringu 0.  It's a Prequel to the famous film series about the killer video tape.  With another film already out- Sadako, future review- it's interesting to look at this one.  It's all about how the girl on the tape becomes so damn evil.

In the End, she gets attacked by everyone, including her father.  As she lies in the well, she suddenly wakes up and all seems to be well.  However... 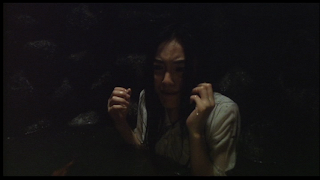 She wakes up back in the well.  She's doomed to die.  Ow.

Let's end with the third selection: The Descent.  We're going with the *actual* ending, as opposed to the hacked-up 'happy' Ending given to us Yanks.

A bunch of ladies go down in a Cave and then get stuck.  It's only when they're trapped that they realize that monsters are also down in the Cave.  The girls get picked off and one of them manages to dig her way out.  That's how the *new* version ends.  However...

She hasn't really escaped!  She's still down in the Cave and has gone insane (at least until the terrible sequel)!  Damn!

So that's the end of this Act of Spoiler Theatre.  Do you have any comments/complaints?  If you have either (or an idea for a further entry), leave a comment.
Posted by Alec Pridgen at 11:46 PM