It's a crazy idea...just not that well done.  Today's film is Frankenstein's Army, a film that has all of the promise in the world.  Nazis- check.  Mutant creatures- check.  Found Footage narrative for no reason- unfortunately, a check for that one too.  Yeah, let's get right to it: this is a Found Footage movie.  The bottom line: it doesn't really affect the narrative that much.  It doesn't really succeed or fail due to this idea.  It just kind of is a Found Footage movie.  The idea does make for an odd contradiction with the plot, but I will get to that in a bit.  You want to know what it is about, right?  Well, without SPOILing too much, here's the gist: a relative in the Frankenstein family is aligned with the Nazis to create some freaky shit (yo).  Will a rugged band of Russians be able to stop his plan?  Will the man-mutant hybrids succeed?  Will they know what to do when they run across a man with an airplane propeller for a head?  To find out (in a SPOILER-FREE) way, read on... A Russian Squad is going into enemy territory on a secret mission so, naturally, they have a guy documenting everything.  I don't see why you would question that. 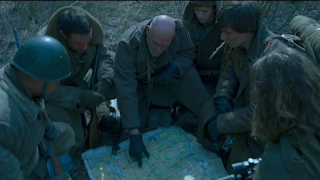 The group start to run across some weird skeletons and remains.  I'm sure that it's nothing. 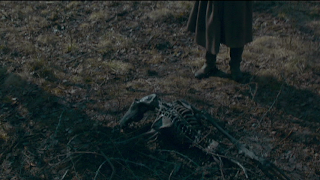 Okay, THAT may be something.  You may have wandered into Silent Hill. 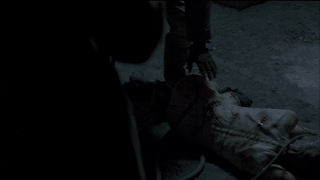 You can assume that I took this blurry shot by accident or on purpose- your call. 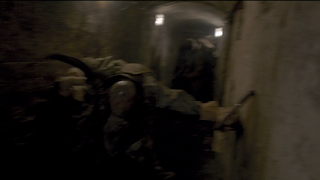 In the film's defense, there are some moments where they play with the Found Footage motif.  Bonus points for not *completely* ripping-off the famous shot from Cannibal Holocaust.  This one is a bit close though... 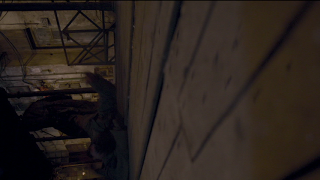 That...that's something you don't see every day.  Good use of branding by those Nazis, right? 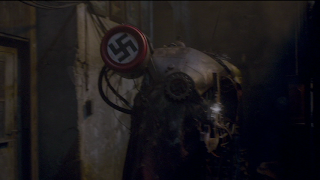 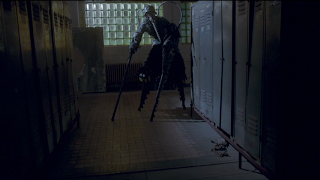 Those Boy Scouts sure are aggressive in their selling tactics!  They really want you to buy their excess Samosas!

No, this is obviously Frankenstein and his lovely lab assistant.  I won't SPOIL how this bit comes about. 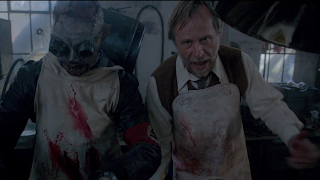 Things come to a head in a pretty dramatic way, although the film's budget shows a bit by the end.  I won't say anymore, lest I SPOIL too much more for anyone.  The End. 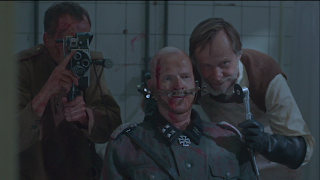 It's so close to being a Cult Classic.  The biggest issue for me is the Found Footage aspect.  For newer readers, know that I don't *inherently* hate films that use this style.  I like O REC, really like Cannibal Holocaust and adore Trollhunter.  They still haven't remade that for us Yanks- good.  Those films work because they really make the most of the concept, really immerse you and/or just plain make it look scarier that way.  I can tell that they were TRYING to do this here, but it didn't work for me.  The Found Footage thing does work both ways, mind you, as fans of it will probably be more drawn to the film now.  Getting past that, the film is mostly build-up.  While I don't like unnecessarily-long horror films, but this one felt like it could have been longer.  They spend a little time in the part that you really want to see, but just take too long getting there.  The build-up is somewhat interesting- I will grant you that.  One thing about the film's budget is the scale of things.  The film feels very claustrophobic and cramped.  In the chase scenes, that works to its advantage.  However, the film's premise BEGS for a bigger scope and feel.  I want to see big battles with these guys.  If you gave this film to Noboru Iguchi or Yoshihiro Nishimura, they'd have them doing battle in the real 'theater of war.'  I want to see these creations taken to a bigger scale and used to their fullest.  Who wouldn't want to see half-man/half-robot mutants storming the beaches of, say, California in a historically-inaccurate riff on D-Day?  Someone give Richard Raaphorst $50 million (or whatever its equivalent in Euros is) to make this movie!  In the End, the film is a neat glimpse at what could be.  Speaking of neat glimpses... 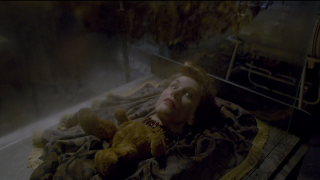 Next up, an oft-overlooked '80s Werewolf film.  Will it be a film to track down or continue avoiding?  Stay tuned...
Posted by Alec Pridgen at 10:29 PM