Lost in Translation: Night of the Living Dead (Part 2)

Fooled you- I went German!

So yeah, here's a poster that says...something. 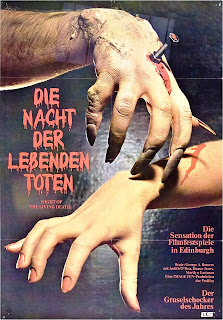 It's been awhile since I saw Night (and two weeks from when I'll see it again), but I don't remember long-nailed monsters.

Actually, there's a movie with that- Living Dead Girl.  It was a French Zombie film made over a decade later.

Yes, it was also a Rob Zombie song.  Nerds.

So yeah, did they make a film for the wrong movie again?  Silly Germans.
Posted by Alec Pridgen at 10:27 PM