Shazam is back in Theater for the first time in 7 Decades!  Let's celebrate this with a Hero who hasn't been since in almost 4!  This is Condorman, a 1981 Superhero Comedy that is a bit odd.  The Film is not that remembered, but is importantly historically.  For example, it's an early Superhero Comedy, long before stuff like Superman III.  Another example- it is one of the many money losers for Disney that led to their issues in the '80s.  It's good to be in such elite company as The Black Hole and Something Wicked This Way Comes (and also Tron).  Just think- there's some Alternate Earth where they got a Black Hole Sequel instead of Tron: Legacy.  This Film also proves to be an early Superhero Film being Meta, long before Deadpool stole our hearts on Valentine's Day.  To be clear, this is just a 'Metatextual Story,' so no 4th Wall Breaks.  Our Hero is a Cartoonist who wants to be his creation- to prove that it works.  Just imagine Jack Kirby punching Hitler now- we need a good smile these days.  In his attempts to be a real/fake hero, he proves to be a real hero all along.  This is 1981, so it is right in the middle of the Cold War, so evil Russians galore!  Is this Film a forgotten gem (only mentioned in a Toy Story Short ever since) or just something that birds should build their nests with?  To find out, read on... 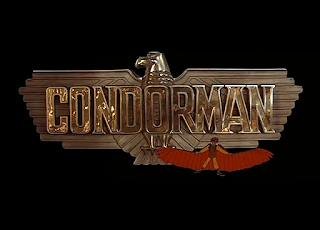 Our Hero is in Paris and tries to fly from the Eiffel Tower, since he'll have Condorman do it.  It goes well.

Fun Fact: the Actor nearly died doing this stunt, so the bit where his Character's friend tells him that 'he nearly died' is...accurate as hell. 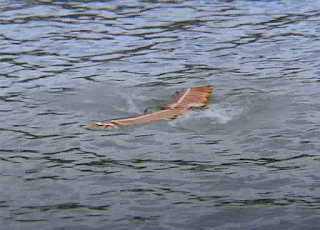 His friend works in the CIA (for MacGyver's friend!) and is given a weird assignment- get a civilian to deliver papers for them.  Right... 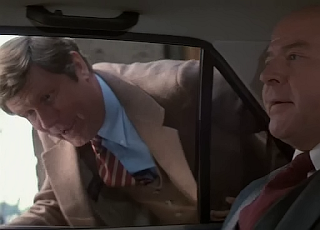 He naturally picks his insane Artist friend, who agrees to go on the 'adventure.' 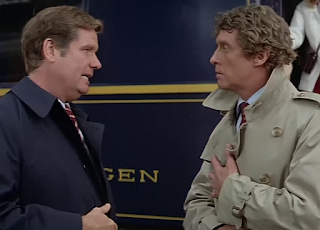 Naturally, the hand-off to the Russian Agent doesn't go smoothly and he escapes by sheer accident. 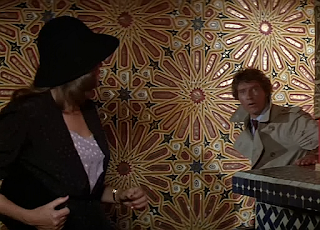 This impresses the Agent and she decides to defect after being mistreated one time too many.

He becomes a reluctant Agent to get her and shows his 'skill' with a cane...that is a machine gun?!? 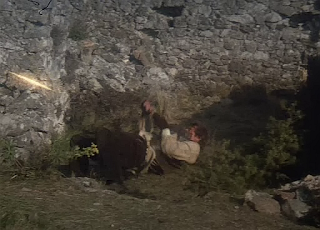 It doesn't go that easily, of course, and a chase ensues.  In the course of it, they escape in a custom Condorman car (hidden in a truck body)...that also turns into a Hovercraft!

How much did they splurge on this crazy venture for?!?  FYI I'm talking about both the CIA *and* Disney here. 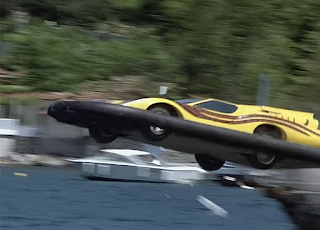 Skipping ahead a bit, she gets recaptured and one last rescue happens.  It involves disguising himself as 'a Sheik' (naturally) and a fully-realized Condorman costume (last seen in the intro). 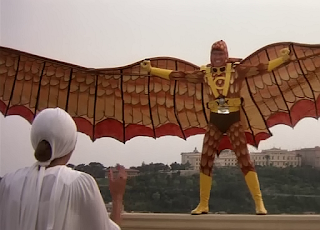 After *sort of* flying with her, they escape in, of course, a Condorman boat, complete with laser cannon! 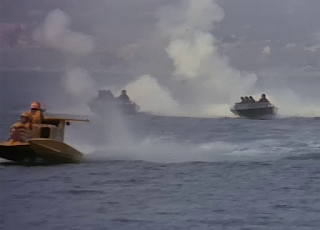 They manage to escape- the Artist now casually-killing Russian Spies- and she falls for him.  The Film ends with them being given a new assignment...but this lost $9 million, so it only happens in a Comic.  The End. 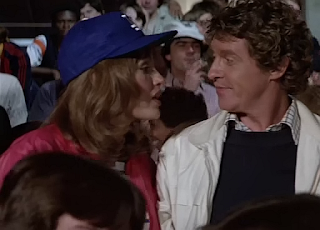 It's a decent Film, but a tad long.  The core premise- Artist becomes Agent to rescue a Russian Defector- is something you either buy into or don't.  I did, but the Movie still only has so many good tricks.  The Film, for me, was just a bit too goofy.  I get that the idea was to lighten up the material, since it is pretty life-and-death.  My suspension of disbelief was just stretched too thin by the end.  What kind of material did this lady have that was worth the Millions they must have spent getting her?  On top of that, we find out that this was later a trap for him- which she regrets- so did he not tell them that?  I'm also not sure if this would ever work again, as he had the element of surprise at all times.  Next time, they'll just watch for your crazy glider suit and just blow you up with an RPG!  The Film is ultimately a bit of harmless fun that is a bit dated.  If you saw it in your youth, you might enjoy it again.  If you want to see '80s Disney and missed this, you might enjoy it.  It's just nothing super-special.  Now remember his glider suit?  Well, bear in mind that he was disguised as a Sheik the whole time with it somehow hidden under this... 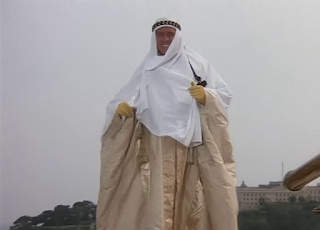