It's nice to watch a good Movie here every once in a while.  Today's Film is Curtains, a 1983 Slasher with a few gimmicks that work very well.  It was notable enough to get a Blu-Ray Release, but also not enough to be a Film people bring up all the time as a 'classic.'  That's not to say anything about quality- just notoriety.  More people are probably familiar with Sleepaway Camp than this one!  The Film is about a group of Actresses targeted by a killer as they audition for a Film.  Still safer than doing any Auditions for Harvey Weinstein though, right?  Who is the culprit?  Is it the Comedian?  The older Actress?  The young ingénue?  The vengeful wife?  The ice skater?  The mysterious man who works at the Cabin?  Even though this Film is my age, I still don't feel like SPOILing it all the way.  Since the Film is less famous than others, why not let other people enjoy it more first?  To see how many puns I can make with the Title, read on... 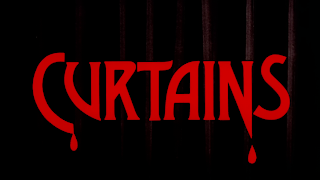 An older Actress seeks to make a comeback.  Her somewhat-abusive Husband is the Director.

She appears to have a mental break from the stress...but it is all just a ploy for her to go undercover as 'research' for the role. 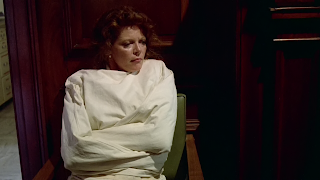 Unfortunately, she learns that it is harder than she thought, her Husband has no interest in letting her out AND he's Casting her part for the Film! 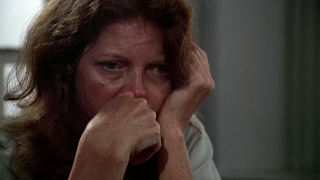 The Actresses all show up to the man's Cabin for a weekend-long Audition.  Well, except for the one who was run over by a car, since she somehow couldn't lift a doll off of the road.

Okay, so there is SOME silly stuff in this one. 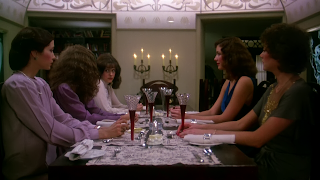 The Wife shows up, putting a wrinkle in things.  Things will go as planned all the same though. 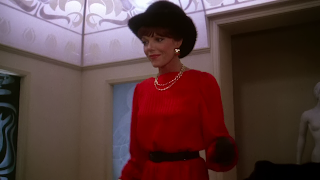 While there is a clear danger in the area from the killer from earlier, the bigger danger is the man inside.  He's kind of a terrible person and he uses his position to get what he wants from the women.

Can I do *two* Harvey Weinstein jokes or should I make a Hitchcock one?  You decide! 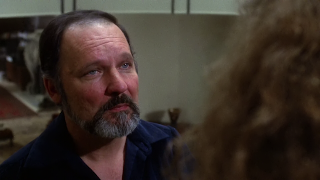 The killer strikes the women when they seem to be the most safe.  Slow Motion Ice Skating is also a skill that a certain Mr. Kruger or Voorhees never seemed to have. 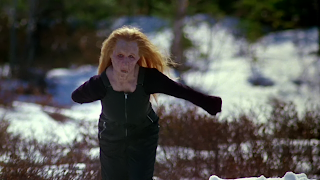 Seriously though- it's the doll again.  I don't get why it keeps showing up. 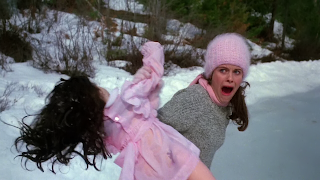 As the body count rises, so does the tension.  Oh and don't stand near any windows. 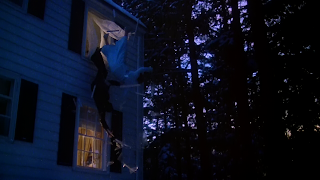 Who is the killer?  Will him or her escape?  Will they ever explain why someone bought this mask in the first place? 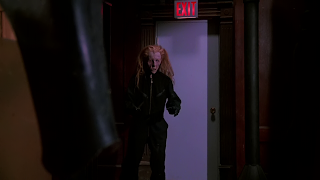 It's Curtains for me.  There- that's one.  Now that I'm done with the obvious pun, let me talk about the Film.  It's good.  It's not 'you must see this now or your life is not complete' good, but it is good.  The Story is a bit different, not focusing on horny teens or some deep, dark secret about a location.  When it comes down to the Slasher stuff, it doesn't look that different though.  Fortunately, the much more interesting parts of the Film are the ones that could just be in any Drama about Actors.  The performances feel quite real and gritty.  The whole thing feels like a Drama that just has Slasher undertones.  There's an odd thing with the kills here- the doll.  It's a bit gimmicky and hampers things a little bit.  For example, the killer had to bury the thing in the snow for the woman to find in advance.  Kudos for planning ahead, but...why?  This happens again, so maybe they just really like to bury dolls.  I do like how the one person uses it as a makeshift weapon to defends herself though.  All in all, Curtains is definitely an obscure enough Film for me to recommend to people.  Just don't notice the little things...like this Crew Member just chilling in the left corner. 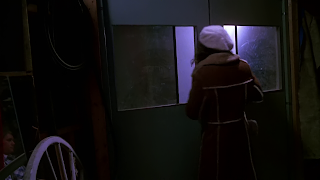 Next time, we go back to France.  Will a once-successful Director show how he got that way in the first place?  Stay tuned...
Posted by Alec Pridgen at 6:02 PM