A bizarre, subversive treat for people from my generation.

Kyle Mooney- who just left SNL- has been quietly trying to make his own spin on things.  He started on the Show with his fake-'90s videos with him as a High School Student.
In the At-Home Episodes of SNL, you saw it with a cartoon about Middle-Aged Mutant Ninja Turtles.

Now it all comes together with this crazy Netflix Show called... 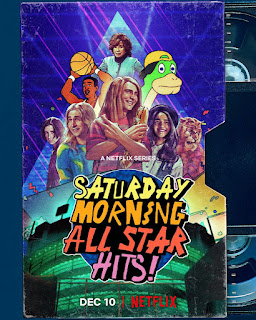 We are introduced to our two Leads- Skip and Treybor- who are Twins played, of course, by Mooney.
They are the Hosts of the titular SMASH, a Saturday Morning block of Cartoons.
It starts out simple, but you start to see the cracks between the two as one gets more attention... 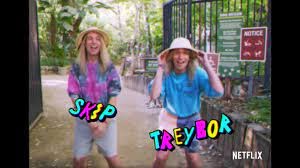 The first cartoon is Randy, the tale of a talking Dinosaur living in the Modern World.
This riff on Denver: The Last Dinosaur is...not happy or upbeat.
He's depressed and starts drinking.  WTF?!? 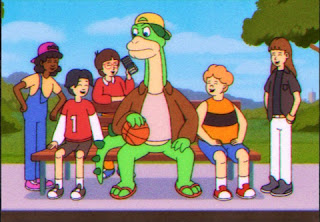 Next up is the Create-A-Critters, a riff on Care Bears, amongst other Shows.
In this one, a guy- Paul Rudd!- hides them in the Garage, while he tries to get his work-life balance in order.
It's all fun and games...until you have to take care of your family. 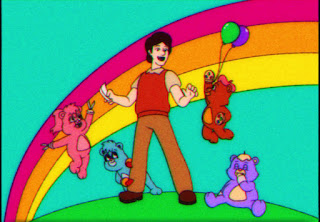 Later in the Show, we are introduced to the Strongimals, an obvious Thundercats parody/homage.
They are violent Characters who came to Earth to create peace...through lots of bloody violence.
Of course, the Show goes through some changes... 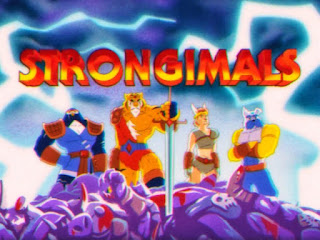 Skip is a Guest Star on the first Episode- that we see anyhow- and is suddenly a breakout hit.
Animation doesn't take months to create in this Show, so his role becomes a recurring one in Week 2 and he eventually takes over the Show!
Basically, if you've seen how The Real Ghostbusters turned into the saccharine Slimer and the Real Ghostbusters, it's this. 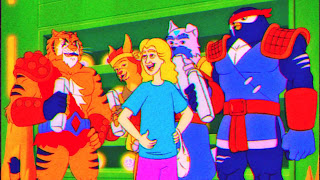 About 10 other crazy Sub-Plots/Events occur over the run of this Show, so I won't SPOIL all of them.
Sufficed to say, this picture of man in a Strongimals Costume is not even the weirdest or most subversive thing you'll see.
To find out how crazy this gets, watch the Show. 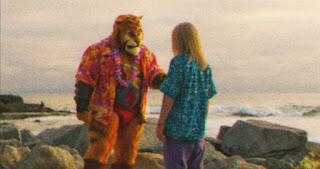 A twisted, but very fun Show.  It's definitely not for everyone though.
For starters, it deals with real issues like Depression and Jealousy, not to mention Murder.  It's not a Kids Show, which is the point, of course.  It just looks like one.
While I know the VHS Filter is working hard on this one, there's alot of other great details that really make this work.  The Animation looks and feels like it comes from the right Era.  It's also not 100% identical, which is how the Show would be.  Likewise, the Voice Acting- Mooney does many voices- is top notch, again feeling like it belongs.
The only critique I could make is that maybe there's too much going on.  By the time the new Shows start to appear, I was worried that things would be too unfocused.  This is definitely a 'We've been working on this for Years' kind of project in all of the good and bad ways.
The Live-Action Segments are a real delight and they get pretty diverse too.  When the B-Plots come in, things continue to look and feel Era appropriate.  They feel just real enough to work, but not so real that its disconcerting/disturbing.  Again- a delicate balance.
So, in summary, if you want a crazy Show that's a love letter to and complete subversion of Saturday Morning Cartoon fare, watch this Show.  Here's the sad version of my 'Go call someone' Stinger... 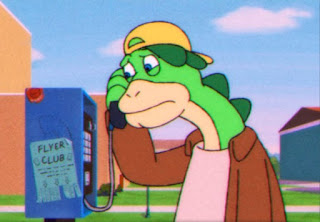 People who know these kinds of Shows and like twisted humor are in for a real treat.  Don't sleep on this one, so we can get a Season 2!