A strange Film for all of the right...and wrong reasons.  This one started out in 1986 with a Production that never finished.
They finally came back and shot the rest in 1989.
It was another 2-3 Years before it ended up on Video.

In spite of that, it looks like it was made entirely in the 1970s.

The Plot involves, well, no such Winterbeast, since the Film is set in the Fall.  Seriously, it's in New England and those leaves are falling!  I guess you'd never suspect to find a Winterbeast outside of the Winter Season.

If you like random, unexplained Monsters, barely any Plot and...well, that's it, then check out... 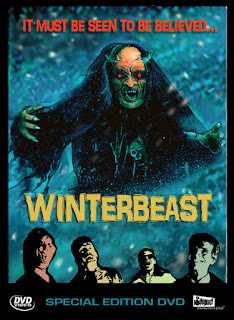 Good luck following this one when it really counts.  So...
A man- our Lead- sees a strange man in the Attic and is attacked by an obviously-Claymation Zombie.
Next thing we see, a different guy is outside and a skull starts popping out of his chest.
That's not how anatomy works!
Now for real this time (how much of that was real exactly?  Dunno), the Lead (The Park Ranger) sees a skeleton and a freaky statue, which they borrowed from a Dokken Video.
No, really. 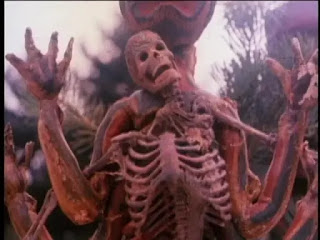 There's also a random Scene- that appears to have been shot in the '70s- where a woman randomly strips down and is attacked by...Groot?!?
He/it never shows up again. 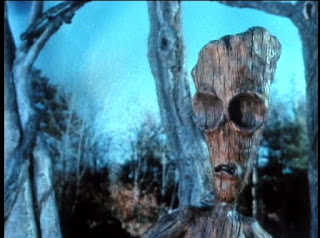 That's the trend here too.
Our Ranger and company learn vague things about Native Americans and a supposed Winterbeast in between one-off Monsters showing up.
For instance, this Sid & Marty Kroft reject. 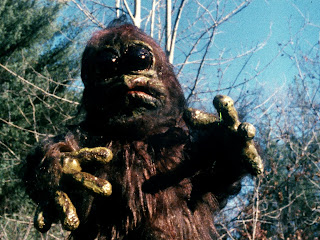 In a different Scene, a Cop we've never seen before climbs down a rock wall, only to get grabbed by...giant E.T. made out of chewing gum.
He's turned into clay and killed.
There's also a Zombie, but you get the idea. 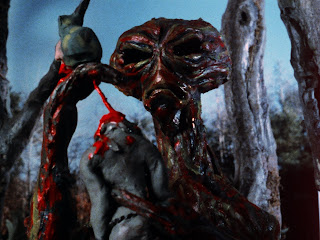 Can our Heroes finally get around to fixing what is going on?
Is the Lodge Owner (who's clearly evil) actually evil?
Why is it so blue out all of a sudden? 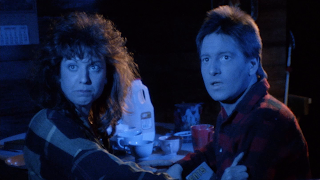 The- I think- titular Beast finally emerges as a Giant Native American Guy (shot in bad forced-perspective) and unleashes a pair of monsters.
One eats a Hero- after turning him into a paper cutout (see below)- and the other is a giant chicken that...just kind of leaves after its appearance.
They win the day, but did anyone really win here?

What a weird, confusing Film.  These kinds of 'Bad Movies' are a tricky lot.  Are they fun or not?
Crazy, fake-looking monsters- fun.
Random deaths of nobodies to pad the runtime- fun.
Having no idea what the point is- less fun.
A prolonged 'guy acts creepy' Scene with bizarre payoff- also less fun.
For all of the good (read: bad, but fun), there's plenty of bad (read: actually bad and not fun).  For one, the Acting.  For two, the Direction.  The Continuity.  The whole presentation when Monsters aren't around.
To give you context, one Scene cuts from what looks like old footage of the Ranger talking to the Lodge Owner and abruptly-cuts to new footage from a different angle.  The Ranger's mustache is different and we never see the Owner's face.  Was he dubbed?  Sure looks like it.
So here's the pitch- if you like weird and bad Films, but also don't care too much about being able to follow it, Winterbeast is for you.  If you like to follow the Plot and not keep asking 'What's this now?!?' then skip it.
As for me, I finally found the thing to tie my Living Room together.  I'm set... 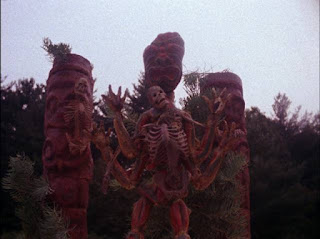 As noted, I might as well rewatch Desperado for the first time, in, like 20 years.  After all, it is one the other side of the Disc.  Stay tuned...