Watching a Movie to justify buying a different Movie- such is my life!  This is Decoys, a 2004 Film about killer Aliens.  Sadly, it's another Species clone.  It is killer girl aliens.  It is a College Campus.  It is slightly-Canadian.  It is so Canadian, in fact, that it was shot by a guy named Villeneuve...but not one related to the Director you're thinking of.  I checked- like 3 times to be sure.  The Director does mostly TV- like Warehouse 13, Flash Gordon and Shadowhunters- but also gave us Vampire Wars.  Its Co-Writer worked on much of the same stuff, but also a new Screamers Film and...ugh, Amityville 5.  Can a generic, hunky guy save humanity from good-looking alien babes with tentacles?  To find out, read on... 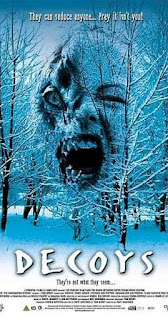 Good-looking Blondes are all over a College Campus in the Winter.  One guy sneaks into their room- innocently, to be fair- and sees too much though. 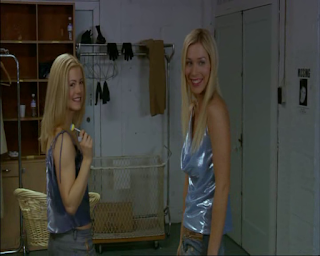 As noted, the girls are Aliens that shoot tentacles/tendrils into men during sex.  All of them end up dying, as their body cools when exposed to the alien substance.
On the plus side, you've hit just about every Male Fear with this, save for guys also losing their members. 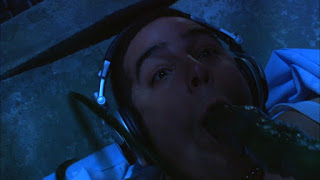 Our man- Corey Sevier- knows the truth...but nobody believes him.
To be fair, would you? 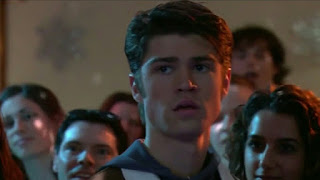 It all leads to a big Dance, since, School and he has to save people at this event.
He mostly just annoys the same poor girl who keeps getting in the middle and annoying this RA. 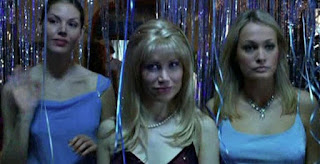 Said Aliens will transform back when they are exposed to any real degree of heat, which raises some questions.
What did they do during the Summer?
Why is it so severe?
Why does this cool-looking Practical Effect mostly get replaced by some dodgy CGI? 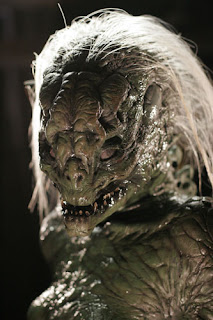 The Plot takes an interesting diversion as one of the Aliens genuinely falls for our Hero's friend, reveals the truth about herself and he willingly lets her do her thing.
He thinks that he can survive and wants to help out. 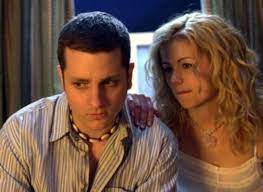 He gives birth to a spider-thing, dies and 'proves' to our Hero that they are evil.
Enjoy this tiny bit of Character subtext/growth- it's gone in the Sequel! 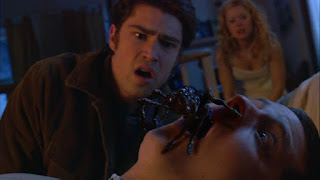 Our Hero finally stops having to deal with this Cop- who's so important that i'm just mentioning him now- and get help from...some lady.
Seriously, they didn't properly explain who this lady is (his Sister?  his friend?).
In any event, they kill the bad aliens and all is well...until our Hero hooks up with his thought-she-was-just-a-friend lady friend...but she's an Alien!  The End.

It's...alright, but really nothing special.  Would I have watched Decoys if I didn't already own a 50 cent Copy of Decoys 2?  Not likely.  Do I regret seeing it?  Not really.  It's not bad.  It's not good.  I will give the Film some props for adding little touches of depth to the Story.  Sadly, that also makes the generic stuff feel even more generic.  Don't give me one interesting moment and stop there- its worse than if you had none!  It's like putting out five McDonald's Burgers and then one 16oz Kobe Steak right in the middle.  The whole Film is just kind of forgettable, save for moments like the good Alien and the twist at the end.  I sure hope that it pays off in the Sequel!  Decoys is harmless, but forgettable viewing.  At worst, it will make you think that you're watching an American Pie Film when the Aliens aren't around... 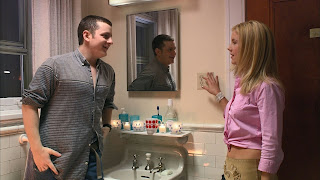 Next up, the Sequel aka the reason I even bothered.  Will it be a superior Sequel?  Stay tuned...